'Ghoul' Is a Horror Story That Speaks Truth to Power

In the Netflix series 'Ghoul', horror is not just visceral but also political. With its cinematically rich and politically aware elements, one hopes it will set a precedent for horror movies. 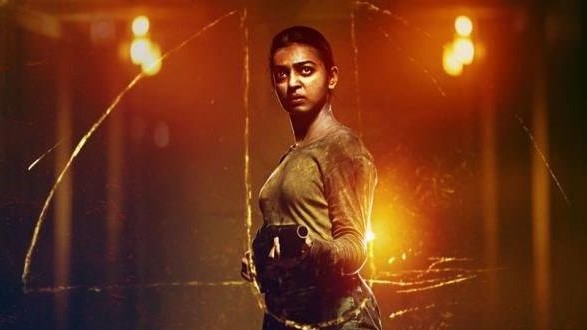 Patrick Graham’s Ghoul, a new show that premiered on Netflix a few days ago, gives a new spin to Hindi horror. Horror here is not just visceral but also political. It comes alive in situations both extraordinary and ordinary – in the dim hallways of deep dungeons; in prison cells; in random interrogations and later, during the arrest of a (Muslim) professor who is told, “You’ve no rights”; in the systematic ethnic cleansing carried out by the state, which orders burning of minorities’ religious texts and symbols. In Ghoul, horror resides in the hearts of people, in casual bigotry encouraged – and rewarded – by their country.

The show opens with the following lines: “The near future. The country has changed. Sectarian violence has reached crisis point. Secret detention centres are established. A military clampdown is in effect.” This reads like a portion from a dystopian novel. But in the India of post-May 2014 – where journalists, rationalists and politicians holding dissenting views are murdered; where the homes of human rights activists are raided; where a Hindu right group plans to bomb a music festival (the last two bits are less than two days old)  — life has dwarfed dystopia. Ghoul, in such times, isn’t just horror; it’s a mirror.

Much of Ghoul takes place in Meghdoot 31, a detention centre for terrorists. Here they’re interrogated, tortured and invariably, murdered. The definition of “terrorists” is critical here. Besides the usual face of terror – the perpetrators involved in killing civilians – it also includes “student protestors, opposition party leaders and religious fanatics”. The “near future” of Ghoul doesn’t look too distant.

Ghoul has a topical fascinating premise, but it is made all the more riveting by its protagonist, Nida Rahim (Radhika Apte). Nida, a Muslim, is treated as a second-class citizen in her country and yet, she whole-heartedly supports the state. She has no sympathy for the Muslims targeted by the police. She uses the ultimate insult in a democratic country, “anti-national”, with ease. She berates her father, Shahnawaz (S.M. Zaheer), a professor, for teaching “seditious literature”. In this North Korea-like regime, where the government encourages its citizens to report other civilians, she turns in her father to NPS, a paramilitary organisation aimed to combat terrorism.

Graham does two important things here: he introduces a protagonist that is difficult to like and dismantles the stereotype of a “good Muslim” perpetuated by well-meaning films. By doing so, the show, for the most part, isn’t doing the thinking for you; rather, it forces you to think.

Divided into three episodes of nearly 45 minutes each, Ghoul takes some time to introduce the paranormal elements. But the everyday vocabulary of horror, which has loomed large over the country in recent times, is present in the show from the beginning. Besides painting a terrifying picture of a Hindu rashtra, Ghoul defines its characters not as who they are, but what they’re not: “anti-religious”, “anti-national”, “outsiders” (the show references ‘[Ghar] Wapsi’ more than once).

The show’s genre, horror, in such a case, is not a surprise. Over the last few years, the genre has come of age. Now, horror films around the world no longer just rely on jump scares and other cheap tropes. Their directors have nailed something fundamental to memorable moviemaking: the importance of creating your own language to tell a story. The 2014 Australian indie, The Babadook, for instance, used the template of a psychological horror to examine a young widow’s guilt; the 2016 Persian language horror Under the Shadow explored the terrors of a war-torn post-revolution Tehran of the ’80s; the American movie Get Out, nominated for four Academy Awards this year, probed the racial tension in the US, ingeniously imbuing horror with humour and satire.

Horror is yet to fly in Hindi cinema, but some films have earnestly tried: Phobia, a 2016 release (starring Apte), depicted the fears of Indian women (especially with respect to public spaces) in terrifying detail; earlier this year, Pari was a comment on the refugee crisis. Ghoul, however, is easily the most satisfying piece of the lot – cinematically rich, politically aware – that, one hopes, will set a precedent.

It is also a significant entrant in another list: stories that speak truth to power – or well, going by the current climate, ‘anti-national art’. In the last few years, films peddling pop patriotism – a lot of them featuring Akshay Kumar – have hit the theatres, cashing in on a larger jingoistic mood in the country. But of late we’ve also had pushbacks and subversions. They’ve come in the form of Pa. Ranjith’s Kaala and Anubhav Sinha’s Mulk. These additions are all the more heartening not just because they tell an alternate story of India and Indians but also because they are well made.

The larger message of Ghoul – that, in times of craven media, only paranormal dissent can be effective – has shades of unlikely humour and uncomfortable truth. Ghoul’s climax can look like a stretch, but Graham and his cohorts reach there with painstaking efforts. The cinematography by Jay Oza, who has a flair for capturing grimy spaces (as evidenced in Raman Raghav 2.0), has a claustrophobic feel, locking us, along with Ghoul’s perpetrators and victims, in the hallways and rooms of Meghdoot 31. Apte, a rare Indian actor who is both prolific and versatile, plays her role in the initial portion with chilling casualness – and later changes gears with equal efficiency. Even the more linear parts played by Manav Kaul and Ratnabali Bhattacharjee never fall into a type and are always alive with penetrating nuance.

Ghoul isn’t without its flaws though – the premise and politics of the show is quite clear early on and yet it repeatedly references Islamophobia and jingoism, lines and scenes that lose their bite after a point. Even its subtext threatens to override the story, giving the impression that the director is mollycoddling its audience. These bits – even though not dealbreakers – jar because they sit awkwardly along with the show’s earlier lean narrative.

These quibbles aside, Ghoul is entertaining and satisfying. Graham has voiced the discontent and frustrations of many, made something at an opportune time that is just beyond the reach of the censor board, which is heavily controlled by the central government. It is in these times that we can be thankful for something like Netflix. Who would have thought that a company from the hotbed of capitalism could become a possible ally to the country’s dissenters? Hello India, meet irony.