'For Sama': A Personal and Political Account of Routinised Violence in Syria

A citizen journalist, Waad Al-Khateab smuggled out about 500 hours of footage she shot over nearly five years in Aleppo. 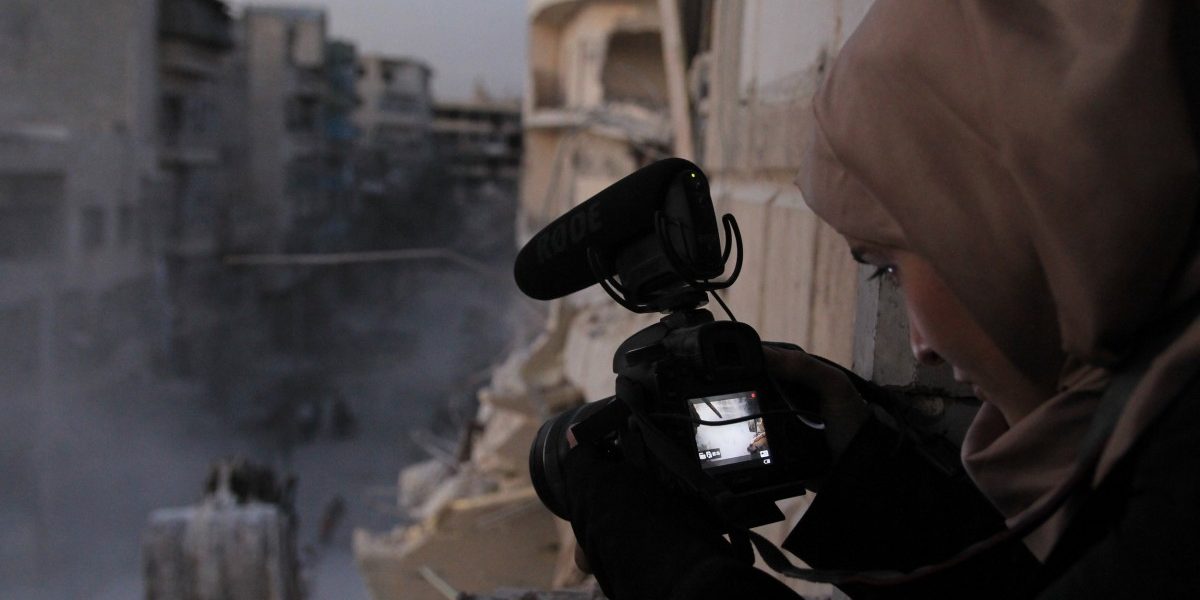 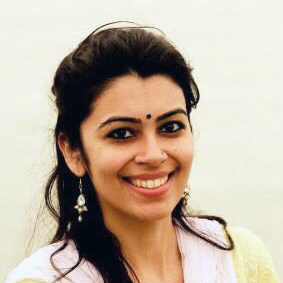 In the immediate aftermath of yet another airstrike by the Russians, two young boys bring their visibly unresponsive brother to the al-Quds hospital, their faces ashen with dust from their decimated house. No pulse is detected and the brothers collapse into tears as their mother picks up her dead son and walks through the streets of Aleppo, weeping.

After another attack, a father won’t stop giving CPR to his dead daughter even after the doctors have given up.

Another young boy is brought in, his head covered with blood and his hand all but gone, but for a mess of limp, bloody flesh. The floor of the hospital is littered with bodies of children, no one cleaning the blood off the floors because the Bashar al-Assad regime has cut off the hospital’s water supply.

Waad Al-Khateab’s heartbreaking documentary For Sama, screened last week at the Dharamshala International Film Festival, is made up of stories like these, as she navigates her life in Aleppo with her doctor husband Hamza and their newborn daughter Sama. She begins shooting in 2011 in the hopeful months of the Arab Spring, when many Syrian citizens rose up in protest against Assad, on through 2015 when the revolution seems to have become a losing battle, with the hospital where Waad lives with her husband and daughter becoming one of the last surviving spaces of hope and relief.

A citizen journalist, Al-Khateab smuggled out about 500 hours of footage she shot over nearly five years, when she and her husband were forced to leave once the president’s forces recaptured Aleppo in 2015. The 100-minute film is born out of this unrelenting record of their lives in the city they imbibed with the spirit of revolution and freedom. The film is entirely shot by Al-Khateab and told in retrospect, almost as a letter to her daughter Sama. Her diary-esque voice-over intersperses political developments with personal struggles of choosing to live in a war zone and to raise her daughter in the midst of constant death. 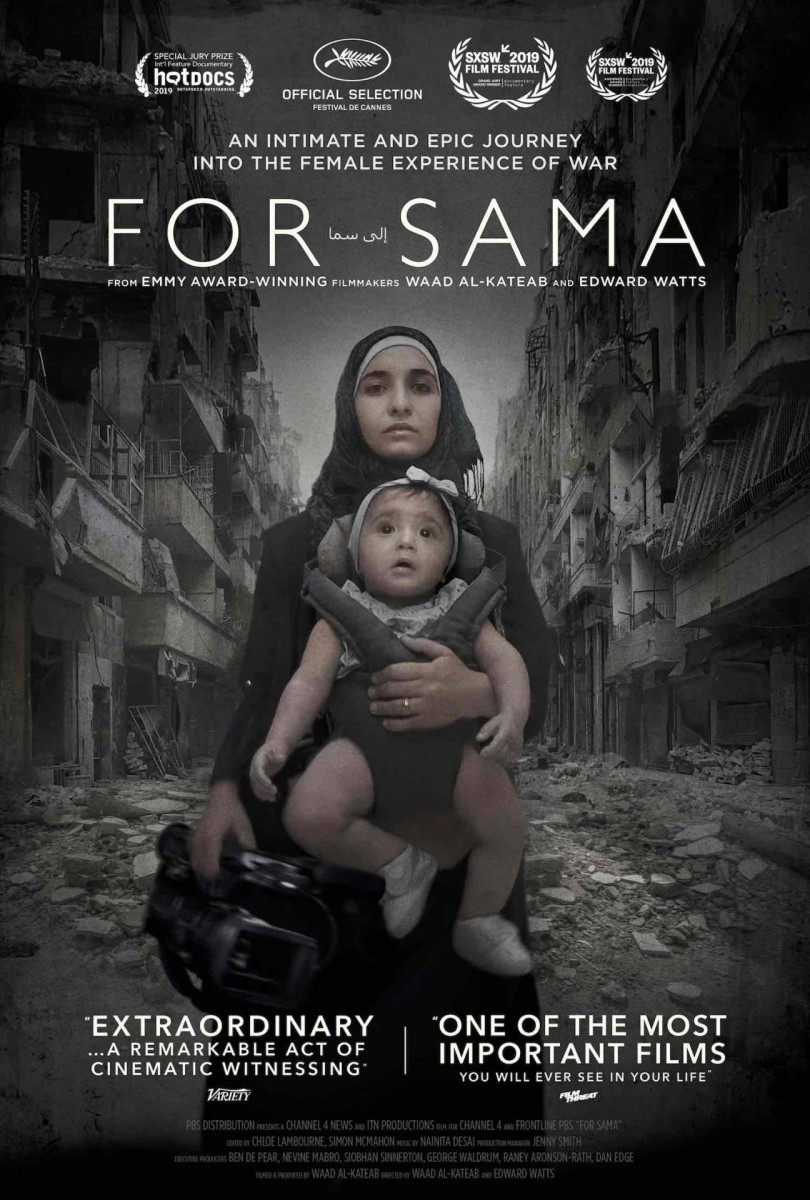 A poster for ‘For Sama’.

Al-Khateab meets Hamza, a married man, in the course of her reporting and soon they develop a close friendship. Both Al-Khateab and Hamza decide not to flee Syria like many of their peers and after the dissolution of Hamza’s marriage, the two become comrades and partners in the struggle against the regime. They are married in a tiny room filled with balloons. Sama is born in the hospital her father set up in a derelict building, where he treats Syrians ravaged by an endless war.

Their home is a room in the same hospital, where windows are packed with sandbags to protect against bombs exploding outside. Sama spends the first year of her life completely accustomed to the sound of exploding bombs. At one point her mother says, “I know you are affected by the bombs exploding all around you, I can see it in your eyes. What makes me scared is that you never cry on hearing explosions like other children do.”

The film is especially gut-wrenching in the way that it is able to make the political personal. It is impossible for someone on the outside to know what routinised violence and despair looks like. It’s impossible to know that it’s possible to laugh in the face of an airstrike, huddled in a basement, scared to death. Its unimaginable that an apparently stillborn baby whose mother is hit by a bomb could finally open its eyes with the help of doctors who wouldn’t give up.

The horrors of the war are brought home with Al-Khateab’s intuitive camerawork, sometimes done while holding Sama in one hand and her camera in the other. The visual vocabulary she deploys goes beyond merely sharing her point of view. The sense of siege, of claustrophobia almost, is juxtaposed every now and then with powerful drone shots of war-torn Aleppo, conveying the universality of such experiences to everyone inhabiting the city.

The task of building a condensed narrative from hundreds of hours of footage, of balancing the sense of fatigue and hope that Al-Khateab experiences, is achieved masterfully by Chloe Lambourne and Simon McMahon’s editing. The music by Nainita Desai subtly underscores the desperation of the situation, never manipulating the audience but softly guiding us through Al-Khataeb’s journey.

Watch: Capturing The Syrian Civil War in Words and Art

For Sama opens with Al-Khateab running around dark corridors looking for her daughter as the building they are in is bombed. The panic and sheer fear of losing her daughter the same way that she sees so many mothers lose theirs in the hospital is palpable in the really long shots we see of her searching for her daughter.

And yet, for Al-Khateab and her friends, the desire to stay in the city they love overshadows all the anxiety they might have about losing their loved ones. A friend’s young son tells Al-Khateab that he will never leave Aleppo even if he has no place to go. “I hope God forgives my friends for fleeing and leaving me here alone,” he tells her as he plays with paper cut-outs he has made of his friends who are either dead or gone.

What is truly exceptional about this film is that in a world where women are expected to choose the personal over the political, Al-Khateab doesn’t give up on her political ideals even in the face of real danger to her daughter’s life, who she very clearly loves dearly. She makes her daughter a part of her professional and political life, something that is truly revolutionary.

In the end the film leaves you with haunting questions about the children who come out of this conflict. What will it do to the boys who lost their brother so young just because he was standing too close to a window? What will become of the little girl who at age four or five can tell what a “cluster bomb” or an “air strike” is? What becomes of your life when your childhood is filled with lessons in what to do when you hear a Russian plane approaching?

These are the questions that Al-Khateab struggles with as they make their journey to Turkey, exiled from Aleppo, from Syria, where they thought they all had a role to play, “even Sama”. “Will you blame me for staying, Sama? Or will you blame me for leaving?”

Tanushree Bhasin is a New Delhi-based writer and photographer.