Set in a West Bengal village on the border with Bangladesh in the aftermath of the Babri Masjid demolition, Prasun Chatterjee's film explores the changing dynamics of everyday interactions as the country comes to terms with a fast-spreading communal divide. 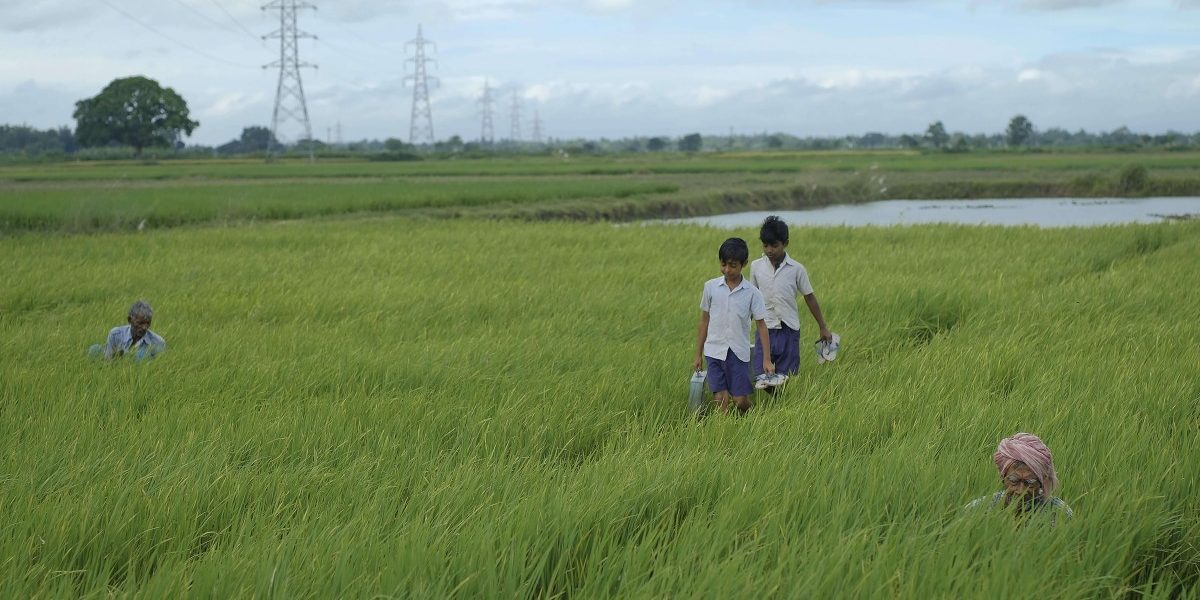 The two eight-year-old protagonists in a still from 'Dostojee'.

Prasun Chatterjee’s debut feature film, Dostojee opens with a sequence of grey skies and rain falling on a wildly lush world. It then takes us through frame after frame of rural Bengal in all its monsoon glory; water bodies, vast green fields, children playing football. It reaches a point where the beauty almost makes you apprehensive about something ominous to come.

That is when we move to the world of adults in a frontier village in the Murshidabad district of West Bengal, bordering Bangladesh. The film is set around 30-years ago; a series of communal riots have happened; the Babri Masjid has been demolished; the Mumbai blasts have taken place and the country will be in flux for years to come. The world closes in; we see little else but the people who will determine the fate of this village on a dark, rainy night.

“It was intentional. I wanted to show how the vastness of the world of two young boys, the simplicity of their thoughts, is affected by [the] smallness of religious politics,” says Chatterjee from London, where the film premiered at the BFI London film festival earlier this month.

Two eight year olds form the anchor of this story. They are the classic two-friend pair exploring the universe together; they sit together in class, attend tuition at home together, pose like Amitabh Bachchan together and together overstep the religious boundaries drawn for them with innocence – one is Hindu and the other Muslim. 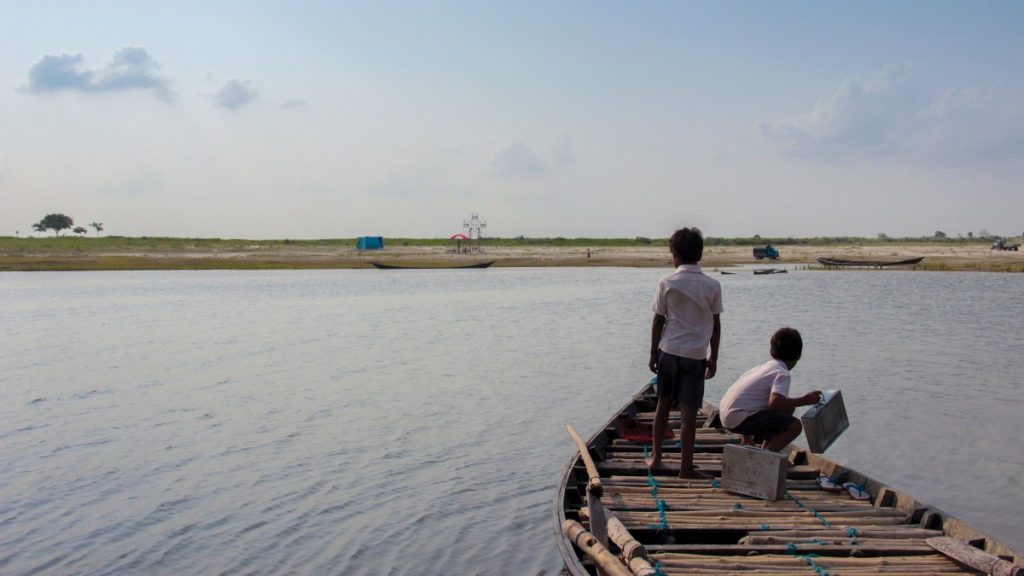 But there is more to the innocence in Dostojee than just the age of the two boys. Their village, like them, is not yet well acquainted with a polarised world and its social norms. Palash and Safikul live in houses that almost share walls, they study together at Palash’s home and attending each other’s festivals is not a taboo for them, until things change in the village.

Chatterjee said that, when he started writing the story, a village life like this was not uncommon in West Bengal at all. “For years, I have visited villages in this area and have developed a strong relationship with the place and the people; you can say it’s my second home. From the conversations we had, from the stories they told, it is apparent that the Babri Masjid demolition and the events thereafter had a lasting impact here, like everywhere. It is certainly not the case that people lived in tranquil harmony before that, but there was a balance that was lost forever,” he said.

Also read: How Falsified History Is a Ready Tool to Deepen Communal Divide

It is this gradual shift that the film captures. Though set in an era of extreme violence, the story here is tentative. It is about the changing dimension of everyday relationships or the gradual scaling up of religious events and rituals on both sides.

When the story struck him in around 2013, Chatterjee wasn’t really digging into what was going on in his own mind. But over time, he realised that being a first generation refugee has had its own effects.

“I grew up listening to stories about our ancestral home in Dhaka. My grandmother held a grudge against Muslims all her life. They were forced to leave with whatever little they could gather. It was their lived reality. These stories have been the some of the biggest creative forces in my life. They drove me incessantly after questions that need to be answered,” he said. 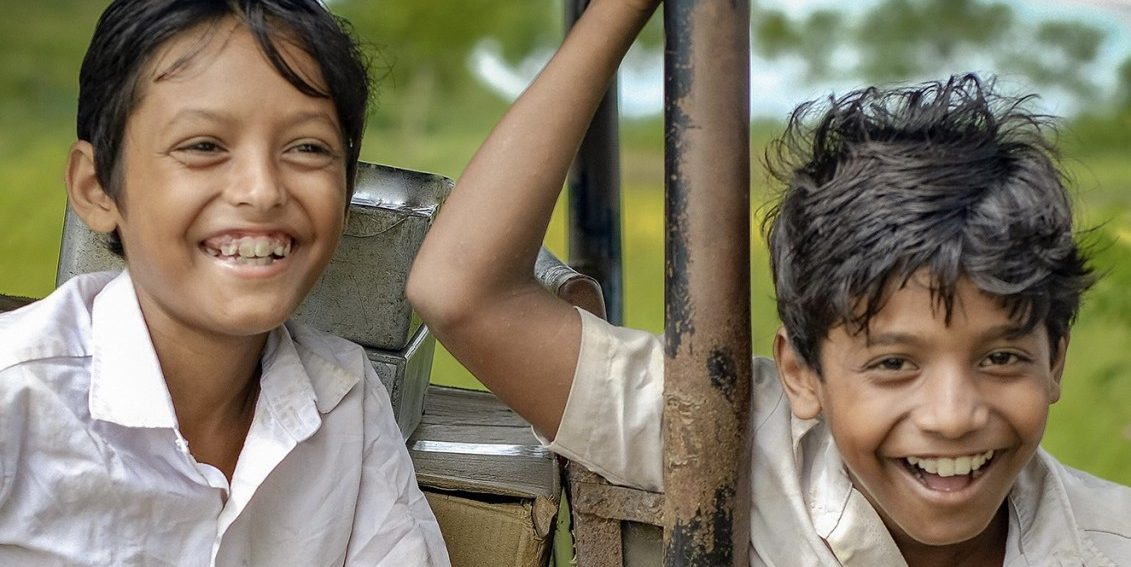 Asik Shaikh (left) and Arif Shaikh (right) on the poster for ‘Dostojee’.

His quest, though, led him to the much larger canvas of politics. “The influence of my parents and my social education meant that I was looking at this violence differently. I kept travelling, exploring experiences of shared living of different communities and how such balance is destroyed. I could see the design behind communal violence, about fuelling hatred between communities and how it eventually helps those who are in the business of power,” Chatterjee said.

This message is put across through subtle allegory in one of the film’s most powerful moments. While watching a jatra (a local open air theatre), Safikul goes backstage and sees the on-stage adversaries smoking and chatting. When he looks at them, befuddled, they tell him, “We are not enemies. We only act as enemies for the people.”

Getting the film made, too, was a struggle. Chatterjee had the script ready and was looking for a producer but even after a long struggle, a producer could not be found. It was then, in 2017, that he decided to go the crowdfunding route.

“It was an eye opener. Many, many people came forward with even as little as Rs 500 when they came to know what the film was about. It just made me even more determined to see the project through,” he said.

In London, tickets to all his shows have sold out and the response, he says, is overwhelming. “People are hugging me when they come out of the show. It is a unique experience to see how people here are connecting with this story,” he said.

Over the last eight years, Chatterjee kept going back to the village in Murshidabad. With every passing year, he saw the fissures growing. “In the last few years the divides have grown deeper. Customs like sharing Lakshmi Puja prasad or Eid simui between communities is quickly disappearing. It is as if the whole story of this village will soon become a thing of the past,” he said.

Chatterjee pointed out that this pattern is true of not just the Indian subcontinent but wherever he travels. “It disturbs me and makes me feel helpless. I used to think that cinema has a lot of influence but I am more cynical about its potential now. But what else can I do but make films, this is the only way of saying things I know,” he said.

Dipanjan Sinha is an independent journalist based in Kolkata.