And Then the Flowers Bloomed

With Dilip Kumar’s passing, we have lost not just a great actor but also a man who remained a fighter for a pluralistic, liberal and secular idea of India. 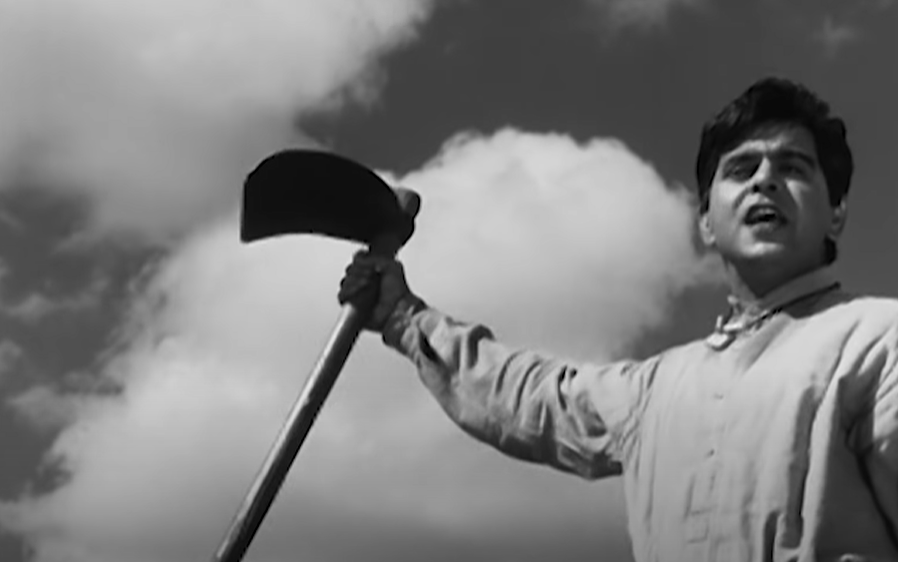 A screengrab of Dilip Kumar from the movie Naya Daur. 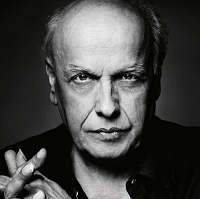 With Dilip Kumar’s passing, we have lost not just a great actor but also a man committed to the pluralistic, liberal and secular idea of India

“Who according to you, is the best Indian actor of all time?” asked the Bangladeshi train attendant to me. His wide smile lit up the cold English morning. I was on my way to Bradford from London at the crack of dawn, for the 2004 Bite the Mango film festival there, where I was to be given the immense privilege of interviewing Dilip Kumar that evening.

Without a moment’s hesitation, I said, “Dilip Kumar, Dilip Kumar and of course Dilip Kumar.”

In that instant, this stranger became a friend. He handed me the sandwich I had asked for, and when I asked him how much I owed him he said, “Nothing at all! We share the same love. Even I love Dilip Kumar. Your sandwich is free.”

Later that evening, when I sat face to face with this enigma, who had the air of an ageing gladiator, in front of an eclectic audience of British Asians in the plush National Media Museum, the electricity in the air was palpable.

“Yusuf Khan, how does it feel to be masquerading as Dilip Kumar in this lifetime?” I remember asking him. “It has been enchanting, excruciating and baffling,” he replied. And then he turned to look at a giant cut out of himself, that was towering on the stage behind us, from the film Devdas and said, “But when I look at this image of that young man called Dilip Kumar, I don’t know who he is. Nothing seems to have added up in my life for me to have deserved this kind of adulation. I don’t know why all of you want to deify me to this extent.”

“Hmm, perhaps because deifying you is profitable,” I said, and went on to explain the incident in the train that morning. The houseful hall erupted in laughter and thunderous applause. But what was uncanny about the moment was the way in which Dilip saab had been listening to the story. This icon of secular India was looking at me as if I was truly talking about someone else and he was a mere spectator. I realised that unlike most stars who are a party to their own myth-making, Dilip saab was the opposite.

Also read: Dilip Kumar and His Idea of India

On the morning of July 7, 2021, as I entered the garden to start my morning walk, there was an unusual stirring in the air. The gardener who was some distance away, cutting the hedge, and listening to bhajans on his tiny mobile, turned to me as I passed. “Saab,” he said sadly. “Dilip saab guzar gaye.” 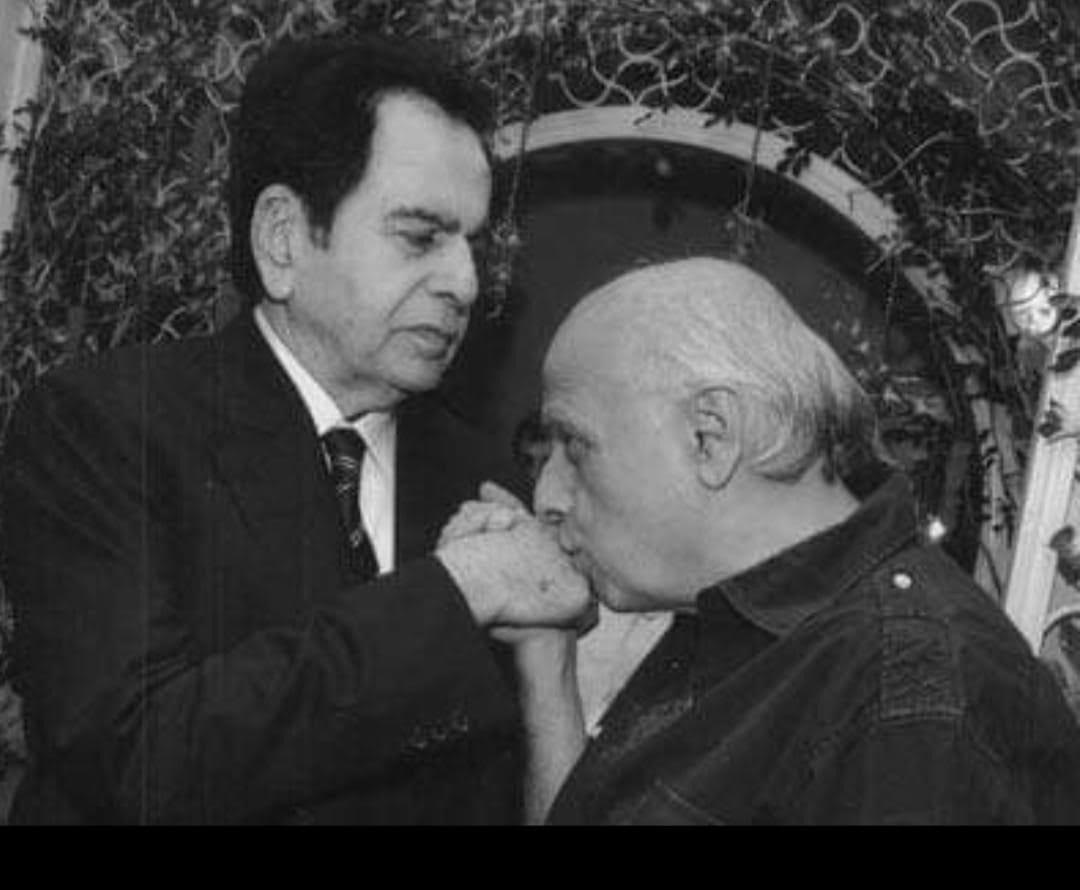 Though I had been expecting this news for a while, since he was ailing and 98 years old, it hit me like a ton of bricks. In order to cope with the finality of the news of his death, I turned towards the roaring ocean, perhaps because I instinctively wanted to escape the roaring in my own heart and drown it with the sound of life eternal.

And then the phone began to ring: from Los Angeles, Pakistan and London, all wanting to confirm whether the news was authentic.

I was staggered by the emotional ferocity with which the callers responded to me when I confirmed the news. When I returned home, a high-ranking bureaucrat from the Maharashtra government lamented the loss of this national treasure and then very respectfully added that the chief minister had decided to lay Dilip Kumar to rest with full state honours.

Don’t ask me why, but the news of him being given state honours touched the people of Pakistan deeply. My writer friend Talat Rahim, the only writer to write a book that brought Indian and Pakistani celebrities together, said that the Pakistanis were overawed with the brilliance of Dilip Kumar. They admired him for being so eloquent not only in Urdu and English but also in Punjabi and Pashto, his native language. But what touched them the most was the image of their hero’s body wrapped in the Indian tricolour.

“What a befitting state funeral was accorded to the heartthrob of millions of Pakistanis. Do you know he was also the hero of our Prime Minister Imran Khan?”

As dusk descended, and Dilip saab’s body was laid to rest, almost every television channel in South Asia beamed the funeral on prime time along with clippings of his fascinating journey in the world of movies like Andaaz, Devdas, Mughal-e-Azam, Madhumati, Ganga Jamuna and many more.

In Pakistan, Dilip saab’s interview with Malika-e-Tarannum Noor Jahan, in which he spoke in chaste Punjabi, was telecast on all their channels.

But can you capture the light of a candle by a mere photograph? As a wise man once said, “A life, measured in space and time, will take up a mere few lines, which our ignorance will abbreviate further.” For me, it is the interior life of a person that leaves its enduring mark on my consciousness. The silences of Dilip saab in his real-life moments were far more eloquent than all those fiery dialogues that one has grown up watching and applauding.

The night after my interview with him, as we sat savouring the highs one had experienced during our interaction in front of an enthralled audience, a strange silence strolled into the room between us.

Also read: With Dilip Kumar’s Passing, Hindi Cinema Loses One of Its Last Links with the Golden Era

Those were troubled times, and the idea of India that Dilip Saab and millions of others had fought for and lived for, was in peril. The politics of intolerance was walking tall in the land of the Mahatma. I turned to him and asked, “How does one align oneself with one’s deepest values, which we were brought up on. How can we renew our faith in our plural heritage, which, since the dawn of time, has been our spiritual and moral compass?”

He smiled, almost expecting this question from me perhaps.

“Mahesh,” he said, “Do you know, after the atomic bomb devastated Hiroshima, the people of Japan were seized with panic, because there was a rumour making the rounds that grass and trees and flowers would never grow there again. Everything that they had cherished and relied on had been blown to smithereens. The mother of all questions that hung in the air was whether there would ever be a possibility of renewal? Would the flowers ever bloom again in Hiroshima? You are asking the same question Mahesh. Will the idea of India which may have withered, ever bloom again?”

The questions that we ask find answers sometimes much later on. In 2014, the Bharatiya Janata Party (BJP) came back into power with a thumping majority. What surprised people like me and all those who live by secular values was that one of the first things that Prime Minister Narendra Modi did was to bestow the Padma Vibhushan honour on Dilip saab. What was even more heartwarming was that he sent Rajnath Singh, then Union home minister; Devendra Fadnavis, then chief minister of Maharashtra; along with Vidya Sagar Rao, then governor of Maharashtra, to Dilip saab’s house to hand over the award to him.

The moment was historic. By honouring Dilip Kumar, Prime Minister Narendra Modi had warmed the hearts of millions of Indians all over the world.

Sadly, by then Dilip saab’s health had begun to deteriorate.

My customary visits to him usually fell on either Eid or his birthday. And what I retain from those meetings are the memories of his passionate outbursts against the climate of intolerance that was insidiously creeping into our lives in those days. It was heartbreaking to see him so genuinely disturbed. Those were no empty words, they came from his DNA which was wedded to the idea of a secular India.

On the afternoon of July 7, I received a very moving image on my cell phone. In the room where Dilip saab lay, with a shattered Saira looking on, Uddhav Thackeray, chief minister of Maharashtra and his son, Aaditya Thackeray, were paying their respects with folded hands to Dilip Kumar.

Once again I was reminded of the question I had asked Dilip Saab in Bradford. The Shiv Sena had once fiercely demanded that Dilip saab should return Pakistan’s highest civilian award, the Nishaan-e-Pakistan, for his contribution towards better Indo-Pak relations.

Had it not been for Atal Bihari Vajpayee’s support to him, when he told Dilip saab that it was up to him to keep or return the award, as there could be no doubt about his patriotism and commitment to the nation, Dilip saab would have returned it. 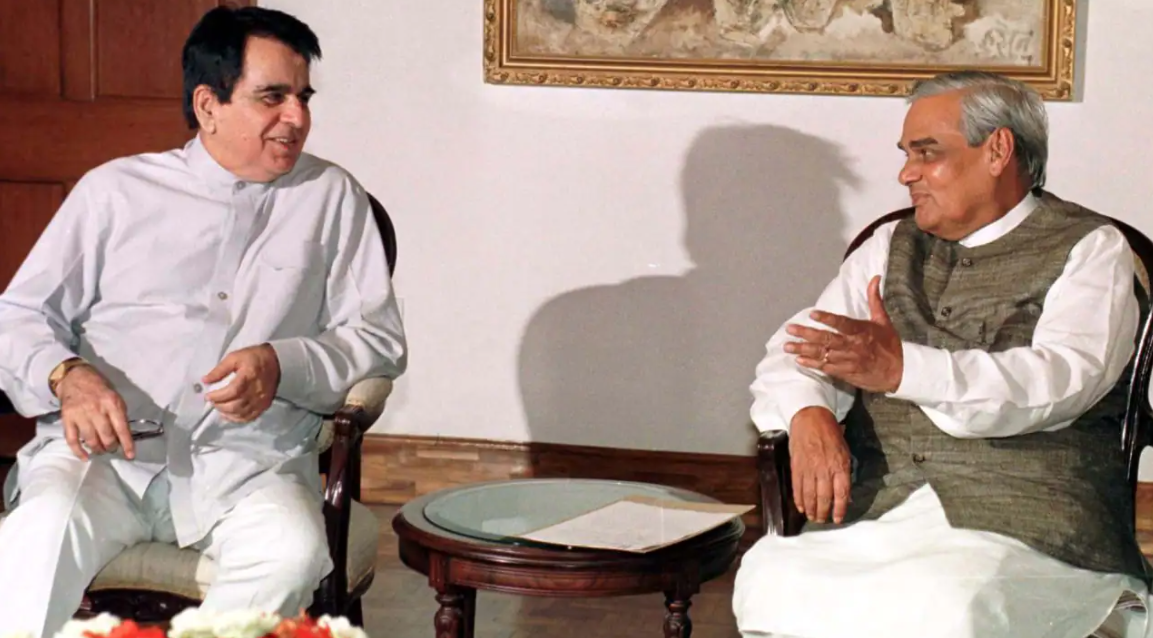 Dilip Kumar (left) and then Indian Prime Minister Atal Bihari Vajpayee, on July 11, 1999. This photo was taken at meeting in New Delhi, soon after the Shiv Sena asked Kumar to return “Nishan-E-Imtiaz”. At the meeting, Vajpayee said it was up to Kumar to return the award, and no pressure should be put on him. Photo: Sunil Malhotra/Reuters

But that was in 1998, and 23 years is a long time. The world has changed. By this humane and graceful gesture on the part of chief minister Thackeray, he has infused life into the fast-withering idea of India once again. The answer that I was thirsting for had found expression through the Sena supremo’s actions. In his death, Dilip saab has managed to bring our divided hearts a little closer together.

And yes, the flowers did bloom again in Hiroshima.

Mahesh Bhatt is a filmmaker.