Baap, Khap and Bharat Mata – 'Dangal' Has it All

Though 'Dangal' tries to have women challenge traditional male spaces, the patriarchal notions of the Khap panchayat are replicated in the baap played by Aamir Khan. 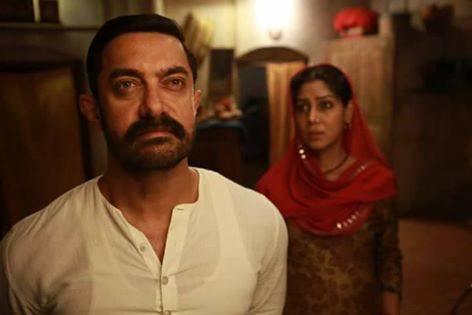 Watching Dangal in Rohtak, Haryana – a city lined with posters of Sakshi Malik (the new face of India’s women’s wrestling) with the medal she won at the recent Rio Olympics – in a cinema hall mostly filled with young men of the city was quite an experience. The aggressive nationalism and patriarchy of the film were quite well mirrored by the audience. What better ambience to watch a film apparently about women challenging traditional male spaces than a cinema hall filled with men cheering and jeering at every Haryanvi word uttered by Aamir Khan and constantly making jibes at the women in the film. Despite all this or maybe because of it, I really enjoyed watching the film and want to thank its the makers and the audience for laying bare the links between baap (father), khap and nationalism so clearly.

From the very beginning, the theme and plot of the movie are quite clear. Mahavir Singh Phogat, a former wrestler from a small village in Bhiwani district of Haryana, wants to have a son who can carry on his legacy and fulfil his ambition of winning a gold medal for the nation.

But to his disappointment, four daughters are born to him, after which he gives up his hopes. Don’t get him wrong – he is a nice man and loves his daughters. Just that he thinks they can’t fulfill his dreams. Life goes on and Geeta and Babita lead a normal life of going to school, learning and helping in domestic work and obeying their parents until one day Mahavir discovers that they also have ‘pehelwani’ in their blood – that they can also fight like men and, well, fight men.

From that day onwards, the sole aim of his life becomes completely taking over his daughter’s lives to fulfil his own ambitions and dreams. That the daughters don’t want to do it, of course, doesn’t matter. He puts them on a strict physical regime under his close supervision and is determined to do away with anything that can distract them from it, even if it is their own hair. In one of the most painful scenes in the film, he orders a barber to cut Geeta and Babita’s hair while they cry and plead with him not to. Again, don’t get him wrong – he is not a selfish man. His ambition is not for himself but for the nation. For that, he even bends the rules of patriarchy and draws the ire of the khap panchayat – breaks religious taboos and fights his whole village and his own family.

But Geeta and Babita have the fighting streak after all, and they don’t give up that easily. They cannot openly get out of their father’s regime but they don’t completely give into it either and keep trying to puncture and subvert it. Dominance has to be converted into hegemony. That is very cleverly done in the film by a female friend of theirs who makes them realise how wonderful their father is  – that he is at least thinking about them and trying to make them something. In other words, their father could have been much worse. So basically they should be grateful to him for not doing worse to them. From that day, they start owning their father’s dream and his regime.

But Mahavir’s dream reaches another hurdle. After all, Geeta and Babita are girls and how much can they learn fighting each other? A cousin of theirs is roped in who they overpower quite soon and then shame him for getting defeated by girls. Now they need to fight real men. Mahavir takes Geeta to fight other men in a public dangal in the city of Rohtak (at this point the men in the audience go berserk). What a revolutionary thing to do! Everyone is quite naturally shocked.

The entry of a woman within a wrestling space meant for men is opposed not only because they are considered unfit, but because they pose a sexual threat. The regimes of most wrestling akhadas are based on principles of strict celibacy and sexual control. A woman’s body in such a space represents a direct threat to it. But the organisers of the dangal – after ridiculing and insulting him for suggesting such a paap (sin) – finally agree to Geeta’s entry, thinking about the lucrative market prospects of displaying a woman’s body in the world of akhadas. And they turn out to be absolutely right. Huge crowds of men gather to see a woman fight men (or a man touching a woman publicly?).

They start by ridiculing her and passing lewd comments but soon, they start cheering her as they realise that she is not there as a woman in a man’s field but as a man. Not to essentialise here what being a man or a woman means or should mean, but Geeta’s body and its language in the film by now is shorn of any of its feminine traits. I have often been asked and have wondered myself, how Haryana, a highly repressive, misogynistic and masculine society, has produced so many sportswomen. One explanation I often think of is because it’s very masculinity allows and even extols women entering masculine spaces as masculine bodies. The script is, of course, never so simply followed and the battles on the ground are much more complex.

Fighting and winning every dangal like this, both sisters become national level champions. You would think that Mahavir must be a satisfied man by now, but no, not yet. His ambition of winning a gold medal for the nation still remains unfulfilled. But for that, Geeta has to go away to another city and train under another man. This is a moment of great tension and anxiety in the film. Away from her father’s rightful control and guidance, who knows what Geeta will do – she might even try to think for herself. And these fears come true. Finally, away from her father’s regime and in the company of new friendship, she finds some space for a sense of self and starts deviating – growing her hair, painting her nails and even looking at boys, dancing instead of practising, watching Bollywood films and loitering at night. Her rebellion reaches its pinnacle when back home for a holiday, she challenges her father’s techniques and overpowers him in a duel.

Such deviations and rebellion cannot, of course, be good for her and she soon gets punished for it when she loses all her international matches. In contrast, Babita, still following her father’s regime and techniques, wins all her matches and also becomes a national champion. It’s time for her to leave home as well but she assures her anxious father that she will never deviate like her sister. She also makes her sister realise her stupidity and convinces her to embrace the father’s regime and control again. This time, Geeta herself cuts her hair. Mahavir once again, defying rules, takes her under his wings and starts training her, much to the ire of her new coach. Lest one forget, Mahavir reminds his daughters and us that he is doing all this in the service of the nation – unlike the coach who just wants fame for himself.

Geeta gets an opportunity to make her father and the nation proud again in the Commonwealth games of 2010. In very real terms in the games, Geeta’s body becomes the ground on which a battle between her father’s control and that of the coach ensues – with both openly shouting and giving her directions. No points for guessing that Geeta sticks to her father’s and keeps winning match after match. In an over-dramatic twist in the final match, the coach manages to keep Mahavir away physically – but his control over Geeta no longer needs him to be physically present. Though to give some credit to Geeta in the film finally, she is shown remembering her father saying that he can only guide her but she has to win by herself. She gathers all her strength and defeats her opponent by accomplishing the most difficult move in wrestling. Are you thinking too much time has passed without a reference to the nation? Don’t worry. As soon as she wins, a young Muslim girl shouts ‘Bharat Mata ki jai’ and the national anthem starts playing. Competing with film for drama, most young men in the audience stood up (and started abusing those who did not and them calling Pakistani).

All this reminded me of the countless times young girls are told by parents, by society and by educational institutions to obey all the curfew timings, dress codes, moral codes for their own good and safety. How every day patriarchal codes of the family are replicated by every institution for making the ideal woman who can reproduce in the service of the nation. They will be punished in various forms if they deviate. Look at all these women who roam the streets at night, wear short clothes, do not listen to their parents and brothers, and get raped. If only they would learn and conform, they can also make their father and the nation proud.

So, the moral of the story is: never deviate or demand azadi from the regime and control of the baap, who replicates the controlling impulses of the Khap, all in the service of the nation.

Natasha Narwal, a feminist activist based in Delhi and Haryana, is currently associated with Pinjratod campaign