Chernobyl: The Image and Sound of Radioactivity Itself

Three days after the Chernobyl disaster in 1986, Vladimir Shevchenko was tasked to document the cleanup operations at the site. When the footage was developed, the filmmaker realised that he had captured the image and sound of radioactivity itself. 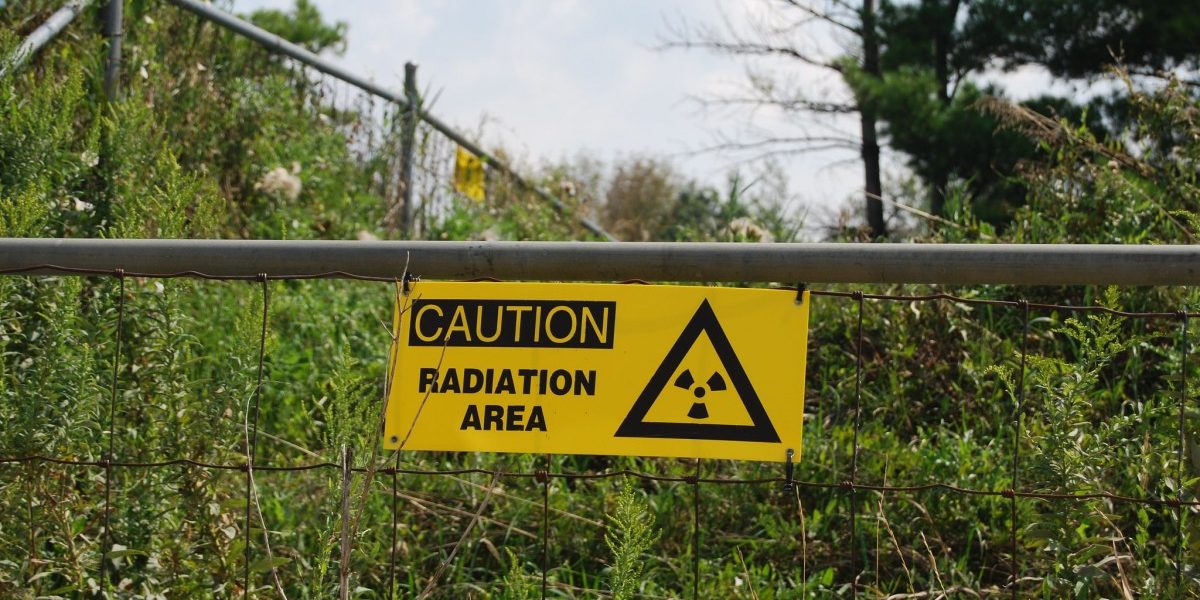 Three days after the explosion and meltdown of Chernobyl’s Nuclear Reactor Unit 4 on April 26, 1986, Soviet filmmaker Vladimir Shevchenko was granted permission to fly over the 30-square-kilometre site known as the Exclusion Zone. His assignment was to document the cleanup operations being carried out by Ukrainian workers and volunteers, most of whom would eventually succumb to the extraordinarily high levels of radiation they were exposed to while trying to contain the disaster.

When Shevchenko’s 35mm footage was later developed, he noticed that a portion of the film was heavily pockmarked and carried extraneous static interference and noise. Thinking initially that the film stock used had been defective, Shevchenko eventually realised that what he had captured on film was the image and sound of radioactivity itself.

Upon projection, small flares of light momentarily ignite the surface of the film. Sparking and crackling, they conjure a pyrotechnics of ghostly defects that are the consequence of decaying radioactive particles moving through the exterior casing of Shevchenko’s 35mm Konvas camera to activate the emulsive properties of the film. What we are witness to, in this fleeting energetic event, is the radiological conversion of a somewhat pedestrian account of the disaster into the most dangerous film in the world.

“Radiation is a fatal invisible foe. One that even penetrates steel plating. It has no odour, nor colour. But it has a voice. Here it is. We thought this film was defective. But we were mistaken. This is how radiation looks,” Shevchenko narrates over the film. “This shot was taken when we were allowed a 30-second glimpse from the armoured troop-carrier. On that April night the first men passed here – without protection or stop-watches, aware of the danger, as soldiers performing a great feat. Our camera was loaded with black-and-white film. This is why the events of the first weeks will be black and white, the colors of disaster.”

Shevchenko’s film, Chernobyl: Chronicle of Difficult Weeks, provides us with an intimate view into the space of disaster. And while its pictorial mediation allows us to remain at a safe and objective distance from the hazard, the sudden distortion of the documentary’s sound and images, and the Geiger-like interference of radiation, inaugurates a sense of dread that what we are witnessing on film is in fact the unholy representation of the real: an amorphous and evil contagion that continues to release its lethal discharges into the present and future yet to come.

The contaminated film footage thus complicates the conventional partitioning of time by hurling us unwittingly back into the contact zone of the event – not merely as viewers but also as witnesses to an event whose time has not yet passed. Even when I am watching a safe VHS copy of this film, I am reminded of the transgressive agency of the nuclear to contravene the material borders that traditionally maintain the integrity between human and nonhuman entities, between bodies and images, between past and present.

Given what we know about the radical chemistry and anarchic temporality of nuclear materials, it is impossible to fully distance ourselves from this fallout on film, regardless of how far removed we believe ourselves to be from the event in both space and time.

The detonation of the first nuclear weapon in 1945 altered the planet’s baseline levels of ionising radiation irrevocably as newly created isotopes such as caesium-134 and 137 began to supplement naturally occurring cosmic and terrestrial radiation. Although caesium-137 first appeared in the early solar system through processes of natural nuclear fission, more than 1.7 billion years would pass before it reappeared on Earth in any detectable amount — on December 2, 1942, as a result of a nuclear chain reaction produced by the first-ever human-made nuclear reactor, the Chicago Pile-1, built under the supervision of physicist Enrico Fermi.

In the decades that immediately followed Fermi’s experiment, “humanity began to significantly change the global radiation environment by testing nuclear weapons in the atmosphere,” as a sobering article charting the fallout from nuclear weapons tests explains. “By the early 1960s, there was no place on Earth where the signature of atmospheric nuclear testing could not be found in soil, water and even polar ice.”

By extension, Shevchenko’s contaminated film, whether the original 35mm print or its VHS copy, signals an intensification of an already increasingly “unnatural” radiological world where anthropogenic contamination would become omnipresent. The interference that we observe within the image field of Chronicle of Difficult Weeks is a tacit reminder that the nuclear always operates in excess of containment and is thus ontologically predisposed to breaching imposed limits, whether they are film frames, reactor units, or remote test sites.

Although radiation is effectively everywhere, events around Chernobyl unfolded in such a way as to negate the scale and extent of the accident, and even initially to deny that it ever happened. As one Polish protestor would scrawl months later on his placard, in an anti-nuclear demonstration held after the USSR reluctantly admitted that an incident had occurred in the Ukraine: “Chernobyl is everywhere – except in the East.”

Also Read: When Chernobyl’s Radioactive Residues Were Thought to Be in Mumbai’s Butter

The irradiated image matter of Shevchenko’s documentary offers a paradigmatic account of a material witness in which trace evidence of an external event – the nuclear accident at Chernobyl – is registered directly by changes in the material composition of the artifact, producing information that opens up the artifact to further analysis and critical reflection.

In the case of Shevchenko’s defective film stock, there can be no dispute that the radioactive isotopes released into the atmosphere by the reactor meltdown – at a magnitude 400 times greater than that of the atomic bomb over Hiroshima – were the source of the film’s contamination, and thus offered compelling evidence as to the scale and migrating nature of the disaster. Indeed, subsequent radiation readings also confirmed that all of his film equipment, including his Konvas and cherished Arriflex cameras, had been severely exposed, thus requiring their immediate decommissioning and disposal. Shevchenko himself died less than a year later, in March 1987.

The public contexts in which Chernobyl’s contaminants would come to feature as evidence that a major nuclear accident had occurred largely took place outside of the Soviet Union. Only when Sweden – after picking up unusually high levels of radiation – threatened to file an official alert with the International Atomic Energy Agency did the Soviet Union admit privately that there had been some sort of incident at Chernobyl. In the political aftermath of the tragedy at Chernobyl, the failure to inform its citizens served to expose the hubris of the Soviet State, which hid the disaster from the public, acted far too slowly in disclosing and managing the risk, covered up negligence in the reactor’s operational procedures, and ultimately exposed millions to unnecessary poisoning, especially as the contaminating winds blew northwest across the Ukrainian border into Belarus, and onward into Poland and Sweden.

Activities were underway for May Day celebrations throughout the USSR; Soviet officials felt that it would dampen festive spirits if news of the nuclear meltdown and potential health hazards were publicised during this period. As a result, atmospheric molecules carrying ionising radiation entered into the respiratory systems of thousands of unsuspecting hosts. Children, it turned out, were the most susceptible to this migrating airborne malevolence. Radiation affects cells in the thyroid gland above all, which in young people are in an active state of duplication or growth. Consequently, irradiated cells were turned out at unprecedented metabolic rates, spawning, in turn, statistically abnormal increases in the incidents of thyroid tumours among children.

Today, an estimated 3.5 million Ukrainians are still plagued with maladies linked to Chernobyl; many of them have received little or no compensation for their suffering. The situation in Belarus, recipient of 70% of Chernobyl’s airborne contaminants, is even grimmer.

Reactors 3 and 4 after the Chernobyl disaster. Photo: Soviet Authorities, Fair use, Wikimedia Commons

A subsequent legal trial was organised entirely around procedural failings rather than the admission of any evidential artifacts of a material nature. In this regard, State silence around the various material expressions of nuclear contamination could more aptly be described as disclosing the management of the disaster as a “nonevent.” If the material witness’s dual obligation is to act as a registration system that archives trace evidence of events as well as accounting for the appearance of such evidence within the contested spaces of public discourse, then the willful lack of public acknowledgment for 19 harrowing days – the length of time before Soviet newspapers registered publicly that a major nuclear accident had taken place – could be said to constitute an event in and of itself. Silence, secrecy, and the withdrawal of the conventions of public speech should be understood as modes of evidence-making in their own right.

Within this context of denial, Shevchenko’s film is a material witness, and a hostile one at that, in both the literal and legal sense of the term. As a materially compromised artifact the film inadvertently offered up damaging testimony that was willfully antagonistic to the narratives of nuclear containment and crisis management that were being advanced by the state via their commissioning of the documentary, with its focus on cleanup operations.

As the airborne malevolence of Chernobyl moved beyond the borders of the Ukraine in the days immediately following the accident, the failure of the State to discharge its civil obligations was an act of malfeasance; one in which political silence was eventually reconfigured as evidence of gross negligence, and rematerialised in the form of public protest and anger. Today Chernobyl is regarded as the political catalyst that led to the collapse of the Soviet Union on December 26, 1991.

Susan Schuppli is director of the Centre for Research Architecture in the Department of Visual Cultures at Goldsmiths, University of London. She is the author of Material Witness: Media, Forensics, Evidence, from which this article is adapted.

This article was first published on The MIT Press Reader.