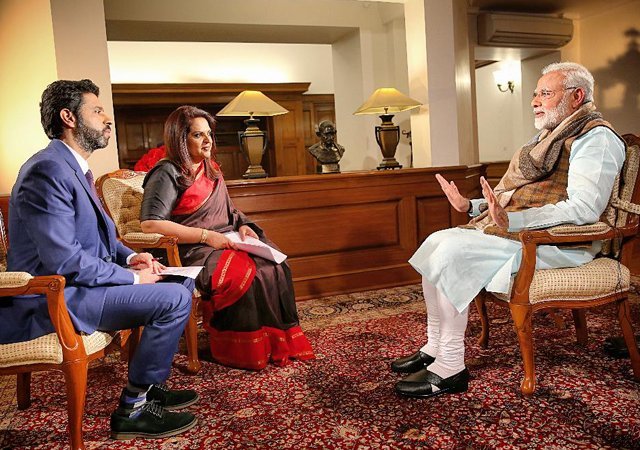 Last week, as the flames lit by the Karni Sena over Sanjay Leela Bhansali’s critically panned film, Padmaavat, swirled through the streets of Gurugram and Ahmedabad, a short excerpt from Shyam Benegal’s, ‘Chittor ki Maharani’, part of his Bharat Ek Khoj series, which was shown on Doordarshan in 1988, arrived on my phone. In it, Om Puri, as Alauddin Khilji coveted Padmavati and mouthed lascivious intent as convincingly as only he could. That no one at that time had wanted to smash a school bus full of children (‘Anti-‘Padmaavat’ Protests: SC to Hear Contempt Pleas; Bajrang Dal Workers Clash With Police’, January 25) in order to protect the fair name of the Chittor queen after seeing this, indicates how far down the road to a narrow, repressed hell we have travelled. Have our skins become thinner or have our agendas grown thicker?

Such serendipitous comparisons between the old and new are reminders of the need to revisit the past in order to understand how much we have lost over the years in cynical shuffles, sneaky compromises, and instructions to ourselves to “adjust” to the power wielders. Among the things we in the media have frittered away most emphatically is the art of interviewing those who rule us, although interviews we know are often the core of information gathering.

Recently two channels, Zee News and Times Now, were bestowed the supreme honour of being allowed to interview the prime minister. Unfortunately, as a columnist in The Wire, ‘Rough Edges: How Not to Speak Truth to Power’ (January 25) put it, “What could have been turned into a razor-sharp exercise in journalism, aimed at prising difficult answers from the head of a government, tragically plummeted to the depths of a bad experiment in public relations.”

One only has to pit these two prime ministerial interactions with the one conducted by Karan Thapar in 2007 to realise how the forensic interrogations of past journalism in this country have been well and truly replaced by the approving head-nodding of today. Zee News editor Sudhir Chaudhary was the picture of smiling acquiescence throughout his interview; Rahul Shivshankar of Times Now appeared so overawed by the man he was interrogating that he sat at the edge of his chair through the course of the interview. One reader response in The Wire did a great wrap of both sessions: “Navika Kumar’s sari is exquisite. Rahul Shivshankar’s shoes really smashing. The carpet is elegant” (not to speak of the PM’s footwear!).

It’s the nature of the questions posed that can make or break an interview. The difference between the supposed “hard” and “soft” question in a political interview is actually a false dichotomy because every question posed to the subject has to pass the test of relevance and the necessity of drawing out information that is of public import. Sometimes “soft” questions have extremely “hard” political ramifications.

Most of the questions that figured in the Zee News and Times Now interviews were framed in an “open-ended” way which allows respondents to bring in information that they want placed in the public domain. In this instance, we heard plenty about simultaneous elections and Mudra Yojna in both interviews, precisely because that is what Prime Minister Modi wanted his audiences to hear.

Both these interviews were, consciously or unconsciously, following a script: priming the prime ministerial image for the forthcoming elections, state and national. In fact, a quick look at the few interviews Modi granted Indian journalists in his three-and-a-half years of rule have all been littered with open-ended queries. The PTI interview of May 2015 began with this gem: “Sir, you have completed one year as prime minister. Can you please sum up your experience?”

Arnab Goswami, when he was with Times Now, was granted an interview in June 2016 (unfortunately, as the top honcho at Republic TV, he has yet to make the grade it seems). His questions were marked by a certain prolixity, but pared them down they too were essentially open-ended: “I would like to start by taking you back to May 20, 2014. The results came on May 16. Four days later, you gave a historic speech in the central hall of parliament and you were speaking to the members of parliament. You had said four days after the results that an era of responsibility has begun. And that you said that in 2019 before the elections, I will come back to this parliament, I will come back to the MPs and I will give my report card. Forty percent into your tenure, how much have you achieved of your own targets?” A dead giveaway of this style of questioning is that there are rarely any follow-up questions and it is the subject who always gets the last word.

What was also striking that the attempts to decode editorially what the prime minister said, apart from a few – notably cyber portals – were also largely superficial. The Wire’s dissection of the Mudra scheme is an instance where dodgey claim-making was called out with data (‘No Prime Minister, Earning Rs 200 a Day By Selling Pakodas is Not Employment’, January 22). But what really took the pakoda, I thought, was the video, ‘Pakoda-wallahs respond to Modi’s statement on employment’ (January 25), where one seller in particular said all that had to be said on the subject, “I educated my son but he has no job…I don’t want him to end up selling pakodas like me.” Full marks to whoever came up with the idea in The Wire team. The feature certainly unleashed unsuspected depths of wit in respondents: “Indians making pakodas under Make in India”, “Pakodanomics”, and the like. Little wonder that the prime minister, always a canny man, dropped the pakoda reference in his Times Now interview.

The last few days have been full of worrying developments for the media. The slow but sure hollowing out of the right to information (‘In Another Blow to Transparency, Government Restricts Access to Secretariat Information’, January 18), the predilection of our members of parliament to deploy their enormous power of parliamentary privilege against journalists whom they accuse of defaming them (‘Lok Sabha Bags Apology from Hindustan Times, But Should MPs Use Privilege Motion to Police Media?’, January 20). The disturbing knowledge that in 2017, not only were journalists killed but 27 of them were are the receiving end of police action (‘Eleven Journalists Killed, 46 Attacked, 27 Cases of Police Action: Report on Press Freedom 2017’, January 20), going by The Hoot’s ‘India Freedom Report’. But amidst this scenario of gloom, the words of one judge held out hope that perhaps all is not lost. Commenting editorially on the judgment that revoked the gag on media coverage of the Sohrabuddin fake encounter case, The Wire underlined that “Justice Mohite-Dere’s is a landmark judgment on press freedom that comes at a time when the media is under tremendous pressure.”

Of all the names of countries around the world, it is possibly the Philippines that gets mangled the most.  Not only are the people of the Philippines, Filipinos and Filipinas (note there is only one ‘P’ here!), depending on their gender, they are often ‘Philippinos’ and ‘Philippinas’. The article that is attached to the name is invariably dropped; instead of a double ‘P’, it gets written with a double ‘L’, and sometimes it is deprived of the ‘S’ that ends it, as if it were a plural form for ‘Philippine’. I notice however that it is now okay to use ‘Philippine’ (‘Philippine’s Duterte Tells Troops ‘Shoot Me’ If I Become a Dictator’). Nice to know this, although I suspect Philippines’ would have worked just as well.

So the Guardian goes the way of the Sun. By turning tabloid, it will certainly trim its losses, but will it end up trimming the depth of its content to keep up with the width of its pages? Now with more and more newspapers downsizing, will it be “All the news that fits” rather than “All the news that’s fit to print”, the old New York Times slogan?

Abin Varghese A.M. writes that he is a “huge fan” of The Wire but, as a South Indian, cannot understand programmes in Hindi like ‘Jan Gan Man Ki Baat’ and other Hindi video fare. He has come up with a good suggestion but one that would take some doing: The Wire, he says, should provide subtitles to these programmes, or release an English version simultaneously.

Meanwhile, Keyur Vanpariya from Rajkot, Gujarat, offers his services to this news portal as a researcher and data collector on a given subject. What’s more, he is willing to do this pro bono because he feels “you guys are worth helping”.