After Seeking Veto Over 'The Accidental Prime Minister', Congress Holds Its Horses

The trailer of the film has sparked a row with Youth Congress alleging distortion of facts and asking for a prior screening.

Mumbai: The Congress’s Maharashtra youth wing which raised objections to Anupam Kher-starrer The Accidental Prime Minister, the trailer of which was released on Thursday, December 27, has been asked to pipe down as the party scrambled to play down what it said was a “propaganda” film backed by the BJP.

On Thursday, the trailer of the film, based on the eponymous book by former Prime Minister Manmohan Singh’s media advisor Sanjaya Baru, sparked a row with Congressmen alleging distortion of facts. The trailer shows Singh as the ‘victim’ of inside politics of the Congress ahead of 2014 general elections, which the United Progressive Alliance lost. The film is set to release on January 11.

Raising objections against the “incorrect representation of the facts”, the Congress party’s Maharashtra youth wing dashed off a letter to the producers of the films demanding a special screening.

In his letter, Satyajeet Tambe Patil, president of the Maharashtra State Youth Congress, threatened to stop the screening of the film across India if cuts suggested by the office bearers of the Youth Congress aren’t made.

“If the said movie is released without prior screening for our office bearers and without making necessary changes recommended by us that we find out after viewing the movie then it will be understood that you are doing this deliberately and we have other options to stop the screening of the same across India for which you and your team would be completely held responsible,” read the part of the letter.

While the film’s messaging may well have overt political overtones – perhaps that is the reason the BJP’s official handle tweeted the trailer – the Maharashtra Youth Congress’s stand flew in the face of attempts by Congress leaders nationally to target the saffron party and parivar for its intolerance towards different points of view.

The BJP made its approval of the film known on Twitter on Thursday:

Riveting tale of how a family held the country to ransom for 10 long years. Was Dr Singh just a regent who was holding on to the PM’s chair till the time heir was ready? Watch the official trailer of #TheAccidentalPrimeMinister, based on an insider’s account, releasing on 11 Jan! pic.twitter.com/ToliKa8xaH

By Friday afternoon, the Congress appears to have decided the film was best ignored and Tambe too quickly fell in line. In a tweet, he said he had withdrawn his demand for a special screening since “it is now evident that [the movie] is BJO’s propaganda/campaign movie”.

As BJP has tweeted trailer of #TheAccidentalPrimeMinister movie from their official Twitter handle… it is now evident that it is BJP’s propaganda / campaign movie … hence we don’t even want to see this campaign movie of BJP and we withdraw our demand of special screening.

It is not clear if the organisation’s threat to disrupt screenings of the film has also now been called off. “We had a discussion. We are trying to understand what is in the movie,” Keshav Chandra Yadav, Youth Congress president, told the Indian Express. “First we should know what is in the movie… what is right and what is wrong. A final decision would be taken only after that…”

The film, based on Baru’s book by the same name, deals with Singh’s stint as the prime minister from 2004 to 2014. It also features former Congress chief Sonia Gandhi, present party head Rahul Gandhi and Priyanka Gandhi as characters.

Kher plays Manmohan Singh in the film, while German actor Suzanne Bernert will be seen as Sonia Gandhi. 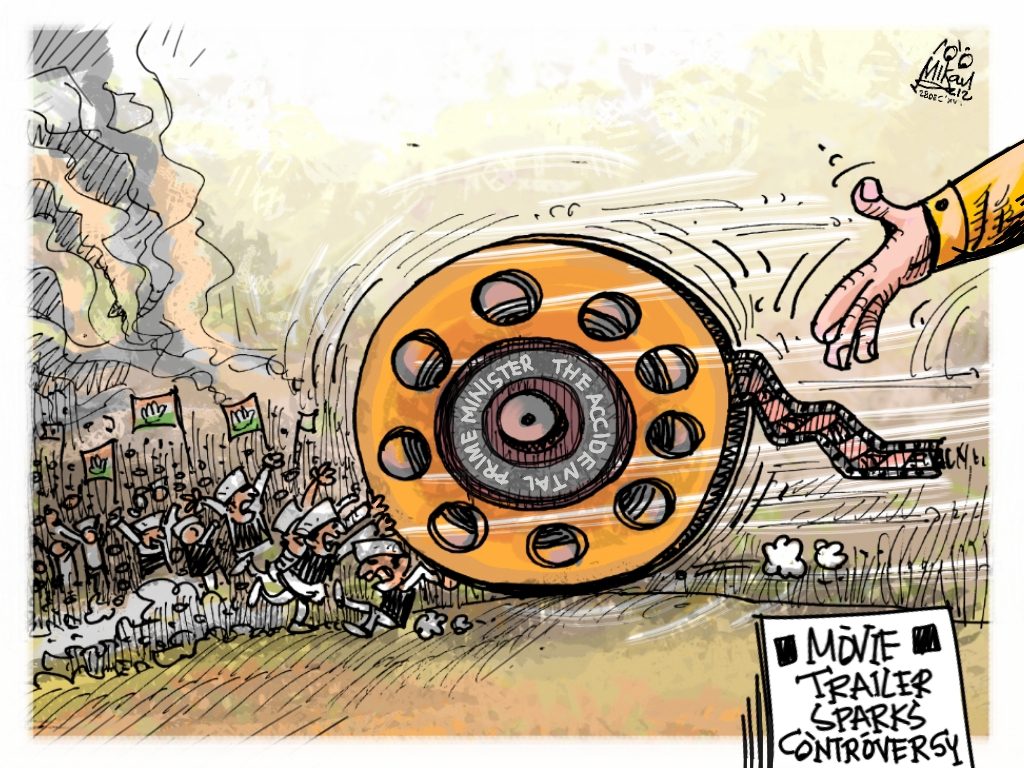 The film is directed by Vijay R. Gutte, son of Ratnakar Gutte, an MLA from the BJP-allied Rashtriya Samaj Paksha. In August Vijay was arrested by the Directorate General of Goods and Services Tax Intelligence for a Rs 34-crore GST fraud.

Congress has in the past accused the Gutte family of siphoning off over Rs 300 crores as part of a sugar factory scam which involved fraudulently taking loans worth the same amount in the names of farmers without their knowledge and later diverting it to films.