Rendering the Invisible Visible – the Magnificence of Alfonso Cuarón's 'Roma'

By placing a maid's perspective at the centre, Cuarón achieves an essential filmmaking feat: he transfers the story’s ownership to her, using art to claim a right life had denied.

Mexican filmmaker Alfonso Cuarón is as interested in the background – the mute elements outside the margins – as in the foreground, their counterparts driving the story, demanding our attention. His 2001 drama, Y Tu Mamá También, a coming-of-age road movie, had a voiceover explaining the social and political realities of rural Mexico; the camera, momentarily detached from the main story, gave a glimpse of hinterland violence and poverty. In Children of Men (2006), set in the United Kingdom of 2027, the camera often moved sideways to highlight the plight of refugees in an authoritarian regime.

By caring for the background, Cuarón’s films interrogate our privileges, our narrow fields of vision rendering the visible invisible. His latest, Roma, a Netflix release, is the ultimate culmination of his preoccupation: the movie’s foreground – the life of a lived-in housekeeper – has been historically considered background by the members of the affluent class, including the filmmakers.

Partly inspired by his own childhood, which had the comfort of a round-the-clock nanny, Roma is an attempt to revisit the past, see it with the clarity of an outsider and, in the process, express gratitude and acknowledge injustice. It is a final lunge at an apology, perhaps decades late, in the language Cuarón’s most comfortable in: cinema – his adoptive home devoid of a caretaker.

Roma unites these three once again.

Set in the early ’70s of Mexico City, Roma opens to Cleo (Yalitza Aparicio), a maid in an upper-middle class household. The family consists of the breadwinner (a doctor), his wife, their four children, her mother, and another maid. They look like a progressive, well-adjusted bunch, treating Cleo with affection and respect. Cleo, too, looks happy with them. She plays with the children, banters with her colleague and, when time permits, goes on dates. By placing Cleo’s perspective at the centre, Cuarón achieves an essential filmmaking feat: he transfers the story’s ownership to her, using art to claim a right life had denied.

But Cleo, by virtue of her class and profession, has always been a passive participant – a watcher in a crowd of doers. How does this agency – the apparent freedom to steer a story fundamentally controlled by others – look like then? Quite uncomfortable, like a wallflower struggling for words when suddenly handed a mic.

Cuarón is perhaps aware of this and uses the device to help the audiences understand Cleo better – examining her worries, dignifying her hesitation, and, more importantly, staying with her. Some of the most discomfiting moments in Roma unfold casually, affecting no one but Cleo, as if chaos were embedded in her natural state of order. At one moment, for instance, she is laughing with the family, watching a comedy with them, but the illusion of kinship is soon shattered with, “Cleo, can you get tea for the doctor?” She gets up and leaves. 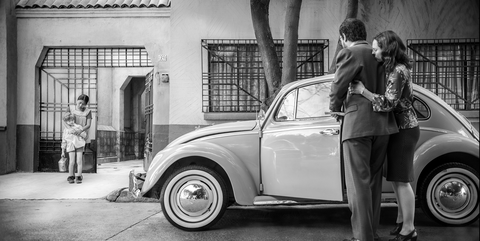 A still from ‘Roma’. Credit: Netflix

In the same vein, Roma shows us Cleo at work: waking up before everyone else, sending the kids to and picking them up from school, entertaining them when they’re bored, mopping floors, washing dishes, cooking food, dusting the house, feeding the dog, cleaning his shit – and among all this, always staying prepared for impromptu demands: “Cleo, can I have a smoothie? Do we have Twinkies?”

Cuarón doesn’t depict the family members as callous, hard taskmasters – the mother asks Cleo to accompany them on a trip; the kids frequently express their fondness for her; the grandmother consoles a pregnant Cleo, and rushes her to the hospital when she’s in pain. And yet, the power differential here is so pronounced that this relationship, even at its best, looks manufactured, like a list of correct things to say, making us wonder about the kind of bond that can be everything but perhaps not love. And that is so because this set-up deprives Cleo of her most basic right: the space to grieve for herself. The accommodating maid has to always step aside for bigger, more urgent worries: a wife left by her husband, children abandoned by their father.

Also read: ‘One Cut of the Dead’ Is a Wonderful Ode to Moviemaking

Roma is at once both a familiar terrain for Cuarón and a crucial departure from his oeuvre. There are several references to his earlier films – especially Children of Men and Gravity (2013) – linking, and paying homage to, his professional and personal lives. Besides, making his feature film debut as a cinematographer, Cuarón retains his love for the long takes, using them to convey momentary liberation or prolonged suffocation. And inevitably, there’s a constant interplay between the background and the foreground. But unlike his previous films which, despite their bleakness, were lit with hope and a sense of rebirth (almost literally in Children of Men and Gravity), Roma is devoid of any grand gestures or optimistic ambiguity.

And yet, Cuarón’s fondness for Cleo, accompanied by his guilt, forbids her to become a whole. In the filmmaker’s memory (and life), Cleo must have been a constant reassuring presence, but it is odd to find out that she hardly changes even in his telling, which sees her from different perspectives: as a young woman wanting to fall in love, a friend, a daughter. Cleo is always calm and composed, even when she’s alone or with her friend, expressing no displeasure or exasperation (not even towards the family who often takes her for granted). If at the end of a film, you find a character who doesn’t have even one flaw, then you’re probably looking at a projection, not a person.

But this quibble gets relegated to the sidelines by the time the end credits roll. “Para Libo [for Libo]” – the name of Cuarón’s nanny – comes on screen, as Cleo disappears into the terrace with a bundle of clothes. A plane flies across a bright Mexican sky, taking people to different destinations and loved ones, and right below it, numerous Cleos toil on roofs with clothes, water, and detergent, replaying a routine, living yet another day as if it didn’t even exist.