Albert Speer and the Myth of 'the Good Nazi'

A new documentary explores how one of Hitler's right-hand men attempted "to lull the world into forgetfulness".

Albert Speer during a visit to a munitions factory in May 1944. Photo: Bundesarchiv, Bild/Wikimedia Commons, CC-BY-SA 3.0

“I found a man who embodied evil and for whom human life had no intrinsic value,” said Israeli director Vanessa Lapa of Albert Speer, who was one of Hitler’s close allies. Her documentary, Speer goes to Hollywood, which premiered at the most recent Berlinale, “is about my personal awakening, as well as Speer’s attempts to lull the world into forgetfulness,” she explained.

Albert Speer, the highest-ranking Nazi in Nuremberg to be spared the death sentence, continues to be met with great interest in Germany and the rest of the world.

Born in Mannheim in 1905, he was one of Adolf Hitler’s closest confidants. A trained architect, he joined the Nazi party in 1931 and rose quickly in the ranks. Hitler appointed him as General Building Inspector for Berlin, a role in which he was responsible for the Central Department of Resettlement that evicted Jewish residents from their homes in Berlin. He was also Minister of Armaments and War Production and claimed to be responsible for revolutionizing the German war machine.

After the war, he narrowly escaped a death penalty sentence at the Nuremberg trials and instead received 20 years of jail time for war crimes and crimes against humanity, particularly for the use of slave labour.

The highest-ranking Nazi to be spared the death sentence: Albert Speer at the Nuremberg Trials

After jail, a career as an author

After his release in 1966, he published several works in which he described “his” view of things, which came to be known as the “Speer myth.” At the core was the claim that he had remained apolitical and known nothing about the mass murders of the Nazis and “only did his duty.”

His memoirs, especially Inside the Third Reich published in 1969 and Spandau: The Secret Diaries that followed six years later, became bestsellers, earning Speer a great deal of money. How could it be that a close confidant of Hitler could claim he had known nothing and then become a successful author?

Vanessa Lapa is by no means the first to take on the topic of the life of the high-ranking Nazi. One year after his death in 1981, historian Matthias Schmidt published the book Albert Speer: The End of a Myth, which detailed his carefully constructed myth of innocence. Other books followed, including Albert Speer published in 2017 by Magnus Brechtken, which also described how Speer denied his role in the Holocaust and how many people fell for it.

In fact, Speer played a central role in the Holocaust and contributed to the deaths of many people in concentration camps. As Minister of Armaments and War Production, he is said to have perfected the system of forced labour: 12 million forced labourers worked under him and many toiled to their deaths. 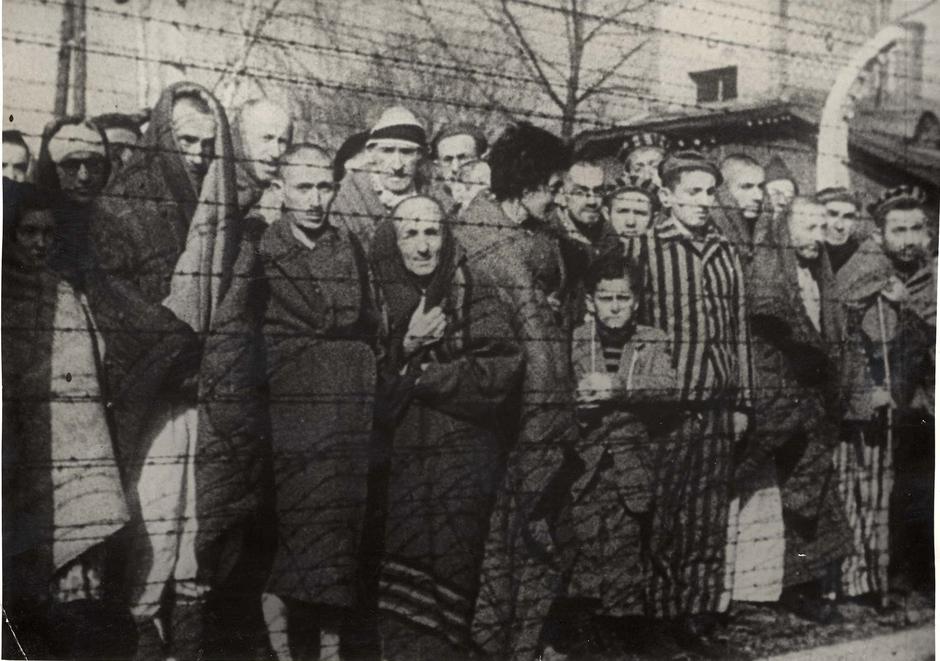 Holocaust survivors stand behind a barbed wire fence after the liberation of Nazi German death camp Auschwitz-Birkenau in 1945 in Nazi-occupied Poland. Courtesy of Yad Vashem Archives/Handout via Reuters

Yet despite the amount of proof by researchers and historians that Speer whitewashed his past, the myth of Speer as the “innocent” Nazi persisted even after his death in 1981.

The film industry has even supported the view of his innocence through movies like the Oscar-nominated German feature film Downfall (2004), which portrayed Speer and other members of Hitler’s cabinet in a favourable light.

Debunking a myth too late

Very slowly and only in recent years has the myth of Speer as a “good Nazi” been debunked in the public sphere. Speer goes to Hollywood also brings another aspect of this story to light.

In 1971, Hollywood movie studio Paramount Pictures planned to film Speer’s bestseller Inside the Third Reich. The temptation of bringing the topic of National Socialism to the screen with one of its most prominent leaders in the spotlight was too great to resist. Tasked with conducting the interview was 26-year-old Andrew Birkin, who would later become a successful director and screenwriter responsible for films such as The Name of the Rose. Birkin met Speer to discuss a potential film adaptation of Inside the Third Reich.

Lapa used the conversations between the two, a total of 40 hours of recorded audio, as the basis of her film. She shows Speer in the years after his release when he lived as “a semi-reclusive country gentleman,” as she describes him, yet she also ads footage from the Nuremberg Trials, pictures of the concentration camps and scenes from the Nazis’ armament factories, which Speer was in charge of. The heart of the film, however, is the long conversation, which was partly reenacted by actors for Speer goes to Hollywood.

Through the film it becomes clear why Speer succeeded in seducing his interlocutors: “In 40 hours of audio recordings never intended for release, Speer opens up about his life to a promising 26-year-old screenwriter,” the director states in her description of the film. “He speaks freely, with no inhibitions, correcting the past as he talks. The aura he exudes is that of an elegant man, more akin to a country squire than the mass murderer of millions.”