Some of them had attended preservation workshops in India and were cautiously hopeful about the future.

Late last week, Sahraa Karimi, an Afghan filmmaker, wrote an impassioned open letter to “all film communities in the world” spotlighting the current state of Afghanistan. “The Taliban massacred our people, kidnapped children, killed a woman in the name of dress, tortured and killed one of our favourite comedians, and killed a prehistoric poet,” a part of it read. “They killed people associated with the government, some of us were hanged in public, and they displaced millions of families. After fleeing from these provinces, the families are in camps in Kabul, where they are in dire straits.”

She spoke about the children dying due to lack of milk, Afghan families living in unhygienic conditions, and the camps being looted. “It is a humanitarian crisis,” she wrote, “and yet the world is silent.” She followed it up with a self-shot video: the camera is shaky, she’s out on the streets, and her eyes are brimming with dread. She also shared a video on Twitter, where she’s on the verge of tears, saying, “Hey people of this big world, please do not be silent. They are coming to kill us.”

Taliban surrounded Kabul, I were to bank to get some money, they closed and evacuated;

I still cannot believe this happened, who did happen.

Please pray for us, I am calling again:

Hey ppl of the this big world, please do not be silent , they are coming to kill us. pic.twitter.com/wIytLL3ZNu

Karimi has gone incommunicado; her location is unknown and an email to her from this reporter went unanswered. Her friends in India are concerned about her safety. “If they find her, they will definitely kill her,” said one; the ‘they’ refers to the Taliban.

For Shivendra Singh Dungarpur, an Indian film archivist and restorer, Karimi’s online messages brought back memories. In December 2019, he had got a call from Kabul, a few days before his Mumbai-based Film Heritage Foundation (FHF) — a non-profit organisation dedicated to archiving, preserving, and restoring India’s cinematic legacy — was about to host a workshop in Hyderabad. Ten Afghans were expected to join the programme, including film archivists and students. But they had run into a frustrating roadblock at the last moment: they were struggling to get visas. Some of those attending had past connections with the Taliban; many had never travelled outside the country; and the visa officer, unaware of film preservation and restoration, had more than one reason to be suspicious.

To circumvent such a politically loaded situation, Dungarpur had an unlikely solution. He procured the contact of the Indian ambassador in Kabul and sent him a video over WhatsApp: of Amitabh Bachchan emphasising the importance of film preservation and restoration and urging people to apply for the workshop. Bachchan, who had visited Kabul and Mazar-i-Sharif to shoot Khuda Gawah in the early 1990s, is a popular figure in the country. “In less than four minutes – the duration of Bachchan’s video appeal – the visa officer was convinced.” That began the FHF’s relationship with Afghan filmmakers and archivists that has continued to this day.

Karimi was to be part of the delegation but dropped out at the last moment. “When I met the delegates in Hyderabad, I was struck by their sincerity, dynamism, and inquisitiveness. We found the commitment of Afghans towards saving their heritage incredible,” he says. There was a sense of urgency among them. “They knew that they had lost so much. They knew that they were far behind,” Dungarpur adds. He noticed a sense of hope among them — “they were looking forward”. “Afghan cinema was trying to get revitalised,” he says. “The archiving had found its fore. They were on the verge of digitising a lot of their material. And that was something which is all now — I just feel where is it going to go, what’s going to happen?”

The team was led by a woman. “My conversations were with three strong women who led the charge and initiated the workshop,” says Dungarpur. 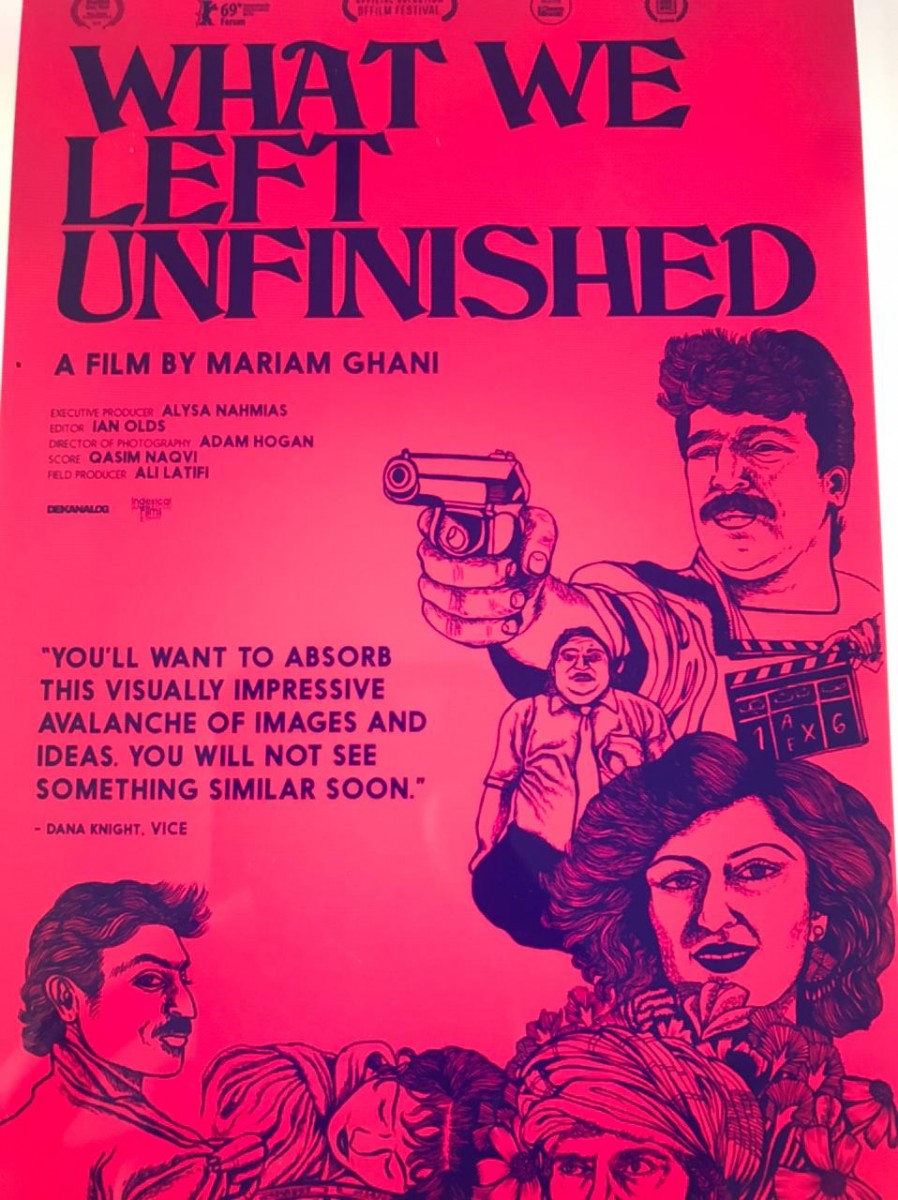 A poster for ‘What We Left Unfinished’.

One of them was Mariam Ghani – the daughter of Afghanistan’s last president, Mohammad Ashraf Ghani – a filmmaker, visual artist and social activist whose first documentary feature, What We Left Unfinished (2019), told the story of five incomplete Afghan films shot during the country’s Communist regime, from 1978 to 1992. It premiered at the 69th Berlin International Film Festival in February 2019. Five months later, it screened at the Il Cinema Ritrovato, in Bologna, a renowned festival of film restoration. It was there that Dungarpur met Mariam for the first time, and their interaction sparked the idea of inviting Afghan applicants to the workshop. (In a cruel ironic twist, the documentary saw a theatrical release in the US less than two weeks ago.)

The Wire’s email to Ghani too has gone unanswered.

It has never been easy to be an Afghan filmmaker. The state-run Afghan Film, for instance, was only established in 1968. The first colour films didn’t enter the country till the early 1980s. The filmmakers struggled to find their voice in the next decade, especially during the civil wars, but something more disastrous happened in 1996: the Taliban came to power. It banned all forms of popular entertainment, including cinema, television and music. It destroyed theatres, burnt film stocks. But some Afghans cared for cinema so much that they risked their lives to save it.

Dungarpur heard one such story from a workshop attendee. In 1996, the Afghan film archivists knew that the Taliban were intent on destroying every film reel available, so they had identified and selected significant movies at the film archive – ranging from documentary footage from the 1920s to state-produced features in the ’70s. They hid those reels in a small room in the Afghan Film building, covering them with wood and painting them with the same wall colours. They buried some reels underground, hid some in fake ceilings. When the Taliban raided the building, the archivists handed over the reels of inconsequential films. The Taliban burned each one of them, but did not search further.

The Afghan archivists had managed to save 7,000 movies totalling up to 32,000 hours of 16mm film and 8,000 hours of 35mm film. Hidden amid them is a story of Afghanistan that not many know: the Farsi and Pashto-language dramas telling stories of friendship, romance, and Afghan culture. The documentary footage, ranging from the ’20s to ’70s, depict a peaceful Afghanistan, yet to be ravaged by the Soviet invasion, the civil wars or, of course, the Taliban rule.

Sahraa Karimi is an award-winning Afghan filmmaker. Her 2009 feature, Afghan Women Behind the Wheel, a feminist documentary commenting on the gender inequality in Afghanistan, was screened at film festivals around the world, collecting nearly two dozen awards. A decade later, she made a fictional drama – Hava, Maryam, Ayesha, centred on the challenges faced by three pregnant Afghan women – that premiered at the Venice Film Festival and was nominated for an Orizzonti prize. In the same year, she became the first woman chairperson of Afghan Film.

Since December 2019, after the FHF workshop, Dungarpur, attendees and Afghan film archivists continued to remain in touch. On December 30, 2019, in response to Dungarpur’s email, the same person who had shared the 1996 Afghan archivists’ story updated him about the film restoration plans in the country. “We want to restore and preserve these films and make them accessible to researchers and film makers,” an attendee had written, “showing our achievements to present and future generations.” In the past, the archive had faced some problems in restoration – with respect to laboratory, digitisation and lack of professionals – “but now it is improved and well equipped”.  She sounded optimistic. “We are working on our collections in accordance with the international standards such as the FIAF [International Federation of Film Archive] manuals.” She was hopeful that the “archive could become a source of income to the Afghan government”.

By then, all the old film prints had moved from Afghan Film to the Presidential Palace archive. More than 36,000 hours of moving images — most of them historical films — had been entered into its database. The government had established a public relations office in mid-2018 allowing people to access the archive through its website. Things were moving, plans were materialising – everything, after a really long time, was finally coming together. With the Taliban taking over the palace, their fate is uncertain – the fear is all film reels will be destroyed and a precious part of Afghan history will be lost.

The above email exchange between the two sides exemplifies the long relationship between the two film industries. A bond that had its imprints on the first Indian talkie, Alam Ara (1931). While assisting Gulzar, Dungarpur found out that the first song in Indian cinema, De De Khuda Ke Naam, was sung by an Afghan actor, W.M. Khan. Superstar Dilip Kumar traced his roots to the country — as did a few others. Films such as Kabuliwala (1961), Zanjeer (1973) and Khuda Gawah (1992), among several others, featured Afghan characters in major roles (played by noted Bollywood figures: Bachchan, Pran, Balraj Sahni) — the Bachchan starrer was even shot in the country, and the then Afghan president, Mohammad Najibullah, a fan of the superstar, provided security to him from the Afghan Air Force during the 18-day shoot.

Indian movies were massively popular before the Taliban’s clampdown. “When I saw Mariam’s film [featuring footage of old Afghan films],” says Dungarpur, “it reminded me of the India of the ’80s and the ’90s. It was like our masala movies.” Dungarpur adds that the video parlours were “very popular” in Kabul. “People used to tell me how they used to sneak in videos even during the Mujahideen times. The Mujahideen people themselves used to watch a lot of Bollywood films.”

So, it didn’t surprise Dungarpur that the Afghans showed a sustained interest in the FHF workshops. A few of them even attended it online last year. Less than one-and-a-half months ago, even amid perilous times, the FHF attendee emailed Dungarpur inquiring about it. “I obviously understand that the COVID-19 situation may not allow for a face-to-face interaction, [but] would there be an online session this year?” In that same email, the attendee detailed the dire “security situation” in the country. Yet one of its last lines read, “We are very hopeful and optimistic for the future of Afghanistan.”

Dungarpur also got an email from a professional at the Presidential Palace archive three days ago. “The Taliban promises to follow human rights, not take revenge from or torture anyone, but people have their own problems and fear death,” read its final few lines. “Unfortunately, I don’t have any information about the Archive. I don’t know what is going to happen. I hope everything will be fine, as they’ve promised. I hope it will be saved from destruction. Please pray for us for things to get better.”