'A Call to Spy': A Sobering Look at War Without Exaggeration or Dramatic Twists

While the look at the lives and work of three female spies is smart and shorn of tokenism, it lacks an overarching question, and is tepid in parts. 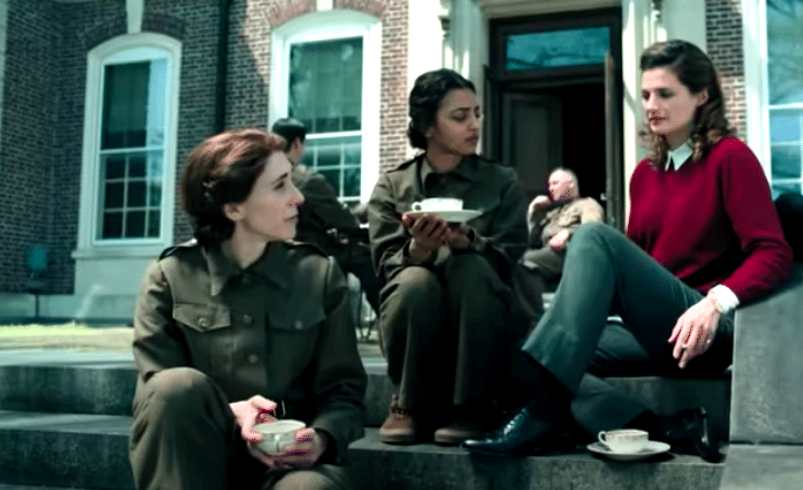 Lydia Dean Pilcher’s A Call To Spy, set during the World War II, tells the story of three individuals who contributed to the Allies victory without being on the frontlines.

In a war spearheaded by men, three women — Vera Akins (Stana Katic), Virginia Hall (Sarah Megan Thomas), and Noor Inayat Khan (Radhika Apte) — held their own, outwitting the Nazis, inspiring a legion of followers. The war flared via bullets and bombs, guns and grenades, but it was helped to halt by stealth and code. A Call To Spy excavates a significant slice of history, showing a different facet of heroism, presenting a more rounded picture of a long bloody struggle.

The thriller opens in Britain in late 1941. The Nazis have occupied France, and Winston Churchill turns to his new spy agency, the Special Operations Executive, for help. The German army is on a relentless march, fighting an aggressive, masculine war for the Fatherland. The Allies solicit assistance from an unlikely quarter: women, to be sent to France as spies to “subvert and sabotage” Nazi plans — people who can remain unnoticed for who they are, escape scrutiny for what they do.

If this group stokes intrigue, then its members heighten it. Helming the collective is Vera, an Intelligence officer, born to Jewish parents, who emigrated to Britain in the late-’30s due to widespread anti-semitism in her home country, Romania. A key member of British Intelligence, Vera has still not received her citizenship and, worse, her lineage is occasionally a cause for suspicion. Stana Katic in a still from ‘A Call to Spy’.

Virginia, an American, has tried for years to be a diplomat and failed, because women are rarely considered for such a position. Accompanying her emotional wounds is a physical impediment: she has an amputated leg — a disability that removes her further from her abiding desire.

Then there’s Noor — the daughter of an Indian Muslim father, a teacher of Sufism born in a noble family, and an American mother — who joins the war, hoping that her effort would bring the British Empire and the Indians closer. Radhika Apte in a still from ‘A Call to Spy’.

A pacifist who appreciates music and literature, Noor seems like a misfit in a world where death and destruction are daily realities. Yet she’s crucial to the mission, an expert wireless operator relaying information from the field about the resistance operations.

Written by Thomas, also the film’s lead actor and producer, A Call To Spy is smartly plotted. The commonalities among the protagonists are evident — each of them, unsettled in their current lives, working on their most unsettling mission — and yet they’re not exaggerated.

There’s also some sexism at the workplace, which is again not hammered; Thomas subtly makes her point and moves on, directing our attention to the lesser known parts of the story. For instance, how Section F’s spies worked on field.

That segment is the highlight of the film, showing with preciseness and the thrills and perils of espionage — identifying danger, guarding oneself, providing assistance. It is the kind of assignment where not getting killed is a full-time job. Besides that, both Virginia and Noor have to constantly look for safe houses, relay messages, thwart the enemy’s plans.

Unlike other similar films, A Call To Spy doesn’t have a fixed end-goal — there’s no one thing to crack, there’s no ticking clock. Life goes on, so does the war — a series of endless stealth and manoeuvre that gets complicated with each passing day.

There’s no plot twist as such, either — the first and the only one pops up after 86 minutes. By structuring her film as a series of constant daily struggles — devoid of obvious dramatic moments — Pilcher accurately encapsulates the experience of an on-field spy.

Also watch | A Call to Spy: In Conversation with Radhika Apte and Lydia Dean Pilcher

One of the most memorable segments in the film is one that, on the surface, looks commonplace: Noor on the road, suitcase in her hand, moving from one safe house to another. Despite all the assurances from British Intelligence, the spies are on their own-they can be arrested, tortured, and shot any minute. Yet no matter what, they must remain tight-lipped. Pilcher and screenwriter Thomas nail the inherent cruelty of the war. The spies care for the Allied Forces, for the collective victory, but that compassion doesn’t run both ways.

This is a commendable approach to the subject, but one that lends the film an occasional narrative stasis. At a runtime of 124 minutes, A Call To Spy lacks a larger dramatic question, making the drama tepid in parts. Further, some crucial plot turns — such as Virginia fleeing France in broad daylight when her posters are plastered all over the city and her associate breaking the jail with a smuggled wrench — even though inspired by true events, strain credibility. Unlike the rest of the film, these scenes are devoid of texture and finesse, lacking the ability to meld fact and fiction. A Call To Spy, elsewhere, relies on the performance of its ensemble, and there it shines. Each character is neatly developed, and the acting furthers that distinction.

Thomas’ Virginia, for instance, enduring years of frustration, has learnt to hide her disappointment in an impassive face, a trait that makes her a good spy too. Katic, as Veera, is initially deferential to her boss — almost grateful to her adoptive country for sheltering her — but that feeling evaporates, when she notices F Section’s inability to protect its own. Noor however, a poet in a battlefield, is the most fascinating character of the lot, and Apte plays her with impressive tenderness and resolve. At the start of the film, Noor has a distinctive soft visage and a pleasant demeanour, making her almost unfit for the job, but as the film progresses, she hardens into a seasoned spy who remains undeterred in face of all threats.

A compelling and sobering account of lives that impacted the World War II, A Call To Spy is a tribute to the numerous sacrifices — many of them unknown — that helped topple the Axis Powers. It is also a significant reminder of the multi-headed nature of grit, and that people, irrespective of their backgrounds and dispositions, can find it anywhere, surprising the enemy — sometimes surprising themselves.