The Many Fallacies in the Modi Govt's Arguments for Simultaneous Elections

The need of the hour is not simultaneous elections, but a drastic change in the whole election process. 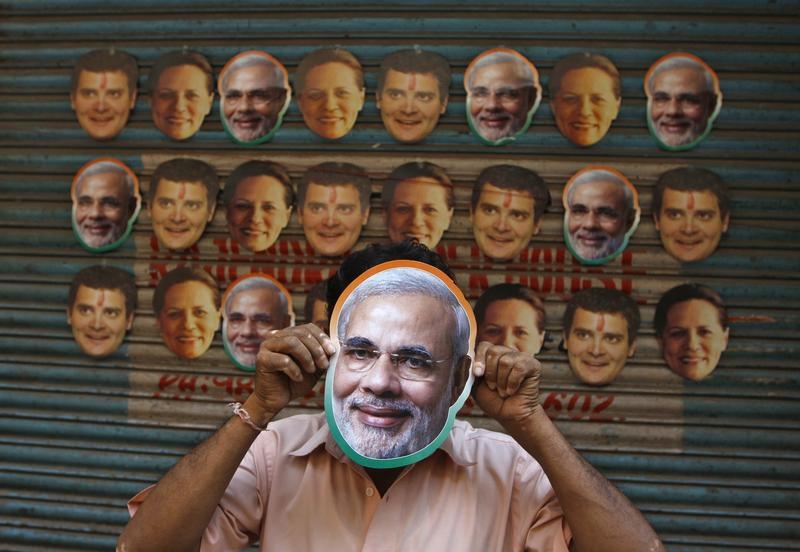 A vendor wears a Narendra Modi mask in Chennai in April 2014. Credit: Reuters/Babu

The present Narendra Modi government has been harping on simultaneous elections for parliament and state assemblies. Top government and constitutional heads have talked about the need for simultaneous polls on historic occasions like the Constitution Day (November 26) or Republic Day (January 26).

However, a look at India’s electoral history shows how flawed such an argument is. The leaders issuing calls for simultaneous polls may need to be reminded that between November 1989 and September-October 1999, India witnessed five parliamentary elections.

Consider the situation that would have arisen if the policy of simultaneous parliament and assembly election had prevailed in such a context. States across India would have had to go through two extra elections in the span of just one decade. Consider the exorbitant expenses such a poll schedule would involve. The fact is that simultaneous polls are only practical if a five-year term is fixed for parliament and all state assemblies.

The present discussion raises another crucial question: what kind of implications does this system have for a democracy? The Modi government is arguing that frequent elections hamper development work. The question is – how then did the United States (which has a system of holding more frequent elections that India) become the world’s most developed nation?

For instance, elections to the US House of Representatives take place every two years while the Lok Sabha has a term of five years. The US president can occupy the presidency only for four years. No president is allowed can hold office for more than two terms. Not only that, the US poll system also has space to seek people’s opinion on a wide range of issues (for instance, gay marriage, abortion etc).

Clearly elections are a regular feature in the US political structure. But they don’t hamper development work.

The same situation prevails in many other democracies in the world. In the United Kingdom, which has a parliamentary system like that in India, elections were held twice in just two years (2015 and 2017). The second election could easily have been avoided had the government not chosen to hold a referendum on Brexit. Then UK prime minister David Cameron was forced to quit after the country voted in favour of Brexit. Theresa May, who took over the reins from Cameron, opted for mid-term elections, seeking a fresh mandate. Fresh polls were held even when there was no apparent need for it. A vote of confidence in Parliament would have been enough to settle the issue.

Also read: Past Continuous: History Shows Simultaneous Polls for Parliament and States Is a Bad Idea

Nobody in Britain made a hue and cry about wasting money. Nor did anyone argue that elections were a hurdle in the path of development. It may also be useful in this context to remember that in 2014, Britain held a referendum on the question of independence of Scotland from the United Kingdom. Or consider for instance, the repeated change of governments and frequent polls that took place in several European democracies (for example in France and Italy) in the post-World War-II years. As had been the case with Japan and Israel. Even at the height of post-war reconstruction, these countries held regular elections.

Elections are at the heart of every democracy. Governments cannot fall back on lame excuses to dodge such a critical aspect of democracy. Floating unrealistic ideas if only to distract people’s attention from pressing problems is one thing – trying to push through simultaneous elections at the centre and in states is quite another.

It may be argued that if the government were really serious about saving money it should have scheduled simultaneous polls in Himachal Pradesh and Gujarat. More ironic is that the very government now proposing simultaneous polls, was then stoutly defending the Election Commission’s decision to have different poll schedules in the two states whose assembly tenures were ending around the same time.

The need of the hour is not simultaneous elections, but a drastic change in the whole election process.

Former Chief Election Commissioner T.N. Seshan, in the early 1990s, initiated some bold moves to reform the poll process. But these reforms later turned out to be cosmetic in nature. The political class, for instance, has continued to spend lavishly on elections. Besides, violating the model code of conduct has become a regular part of the poll process.

The process of election was not always so long-drawn. It was only by the mid 1990s that elections became a prolonged and protracted process. Prior to that, the whole poll process was much shorter. For instance, the 1989 Lok Sabha elections were held in three phases on November 22, 24 and 26. And V.P. Singh became the prime minister by December 1.

One seriously wonders why the process has become so much longer now. Especially when we have technologically-advanced electoral machinery to conduct the polls. If the present government rushes into dissolving all state assemblies – even of those which recently held polls – the process is likely to be as detrimental to the people as demonetisation and the Goods and Services Tax (GST) have been.