Evaluating the Success of the Swachh Bharat Abhiyan

The success of such cleanliness programmes cannot be measured through factors like waste disposal and no open defecation alone; its role in reducing epidemic outbreak is equally important. 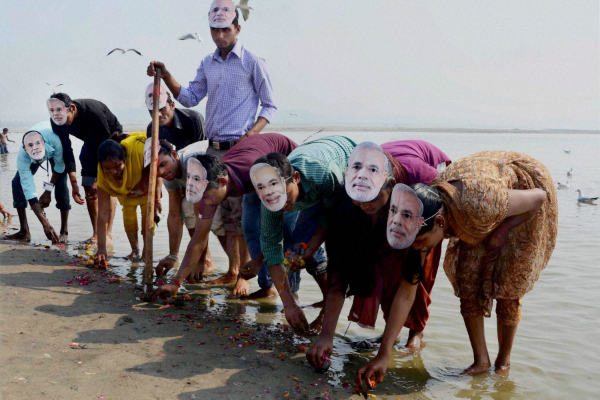 The SBA is one of the largest cleanliness drives in the world, with a workforce of three million government employees who are directly or indirectly attached to the programme. Credit: PTI

October 2, 2017, the birth anniversary of Mahatma Gandhi, also marked the third anniversary of the Modi’s government’s flagship scheme, the Swachh Bharat Abhiyan (SBA). The SBA is one of the largest cleanliness drives in the world, with a workforce of three million government employees who are directly or indirectly attached to the programme. With the SBA now completing three years, it is imperative to evaluate its achievements.

The Swachh Survekshan 2017 was undertaken by the Quality Council of India to check the progress and impact of SBA. The parameters of evaluation included waste collection (sweeping and transportation), municipal solid waste processing and disposal, open defecation and toilets, capacity building and information, and education and behaviour change. For a programme as diverse in impact as the SBA, these parameters will give us an idea of how it has been implemented but to think that they can tell us how the programme has done within a community is illogical.

Simple logic tells us that the single most important impact of the SBA should be on the health of the community. From the era of English physician John Snow, we know that cleanliness drives away diseases and promotes health, and therefore the success of such a programme should also be evaluated using some health parameters. The health of a community is undoubtedly influenced by a clean environment but multiple factors play a vital role in its acquisition and maintenance. Hence, it is essential to use parameters that are objective and yet tell us the short-term outcomes of a cleanliness drive like the SBA.

One such parameter could be the reduction in the number of epidemics after the launch of the programme. Epidemics, particularly vector-borne epidemics (like malaria and dengue) and water-borne epidemics (like cholera and hepatitis) are considered by public health experts to be the most important determinant of cleanliness of the environment vis a vis its impact on the health of the community. Hence, an effective cleanliness drive should be impactful enough to reduce the number of epidemics reported from within the community.

The Integrated Disease Surveillance Program run by the National Centre for Disease Control (under the Directorate General of Health Services) maintains an epidemic outbreak web portal that is regularly updated and, since 2009, any outbreak is reported on a weekly basis. An analysis of this data reveals some interesting facts. Selecting random years and random weeks, the data was divided into before and after October 2, 2014 (the launch date of the SBA), and was evaluated for epidemics that are directly related to cleanliness of the surroundings. Most epidemics fall in this category barring few (like measles) and these were thus not considered in the final evaluation. An evaluation of the weeks 1, 16, 32 and 48 were done for 2011, 2012, 2013, 2015, 2016 and 2017 (2014 was not evaluated as it was the year of inception and week 48 in 2017 was also not evaluated); 2011-2013 were considered as “before” and 2015-2017 as the “after” groups. Statistical evaluation revealed that there is a difference in mean number of alerts/outbreaks of 7.7 in week 1, 11 in week 16 and 0 in week 32 of the respective years between the two groups. The data shows that there is no decrease in incidence of outbreaks/alerts in the studied weeks in the “after” group. In fact, there is an increase in week 1 and week 16 in the “after group”, which is not significant statistically.

This epidemic outbreak data raises important questions about the success of the SBA and the logic behind it. If the massive cleanliness drive has not been able to control epidemics on a short term, what long term outcomes can we expect from it? Controlling epidemics like dengue, chikungunya and hepatits-E is directly related to cleanliness and hence any the success with the SBA should have made some dent in the outbreak of these epidemics, but the current data shows otherwise.

The SBA’s lack of success in reducing the number of epidemic outbreaks can be related to multiple factors like poor management of the programme on ground, inability to identify areas of thrust, and a poor prioritisation of aims and targets within the programme itself. It appears that the main aim of the SBA is to reduce open defecation in the community, which is important. But had this too been achieved to a measurable degree, the outbreak of epidemics should have gone down.

The SBA is an ambitious project that aims to change people’s perception of and behaviour towards cleanliness. The success of such programmes hinges on its ability to undergo scrutiny and constant audit so that the shortcomings can be addressed. By not using tangible and reproducible statistical parameters of health in the audit cycle of the programme, we are subjecting it to falsehood and therefore reducing its worth in bringing about any perceptible change. The SBA in its present form can be best viewed as a “toilet training” of the Indian masses with no significant contribution to their health, or so it appears from the data on epidemics. Reports from across the country have shown that toilets have been constructed as part of the programme but their use remains elusive for various logistical and social reasons. To improve the outreach and acceptability of the SBA it is necessary that people are clearly shown what good it can do to their health. It is unfortunate that in the very year in which the SBA was launched, the government slashed the health budget by around 20%. It is essential to understand that swachta and health are complementary to each other and therefore a horizontal approach to link the two is vital.

Shah Alam Khan is a professor in the Department of Orthopaedics at AIIMS, New Delhi. Views are personal.