Bhupen Hazarika Setu and the Politics of Infrastructure

Celebrations around the Bhupen Hazarika Setu, connecting Assam and Arunachal Pradesh, are nothing but a thin veil to cover the uncertain future of a remote place called Sadiya. 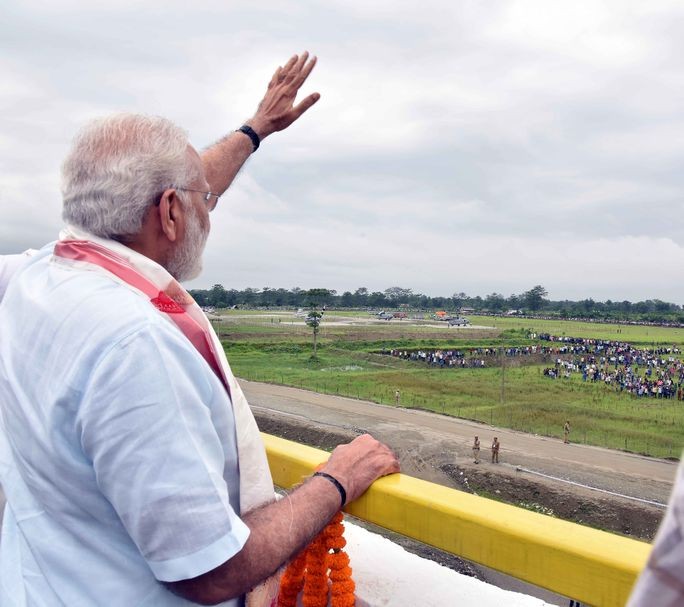 Infrastructures are intriguing things. They always represent more than they actually are. Histories of infrastructures are replete with such examples. While integral to nation-building processes, they also represent flows of capital and resources. In doing so, they carry a ‘developmentalist’ or ‘people-centric’ cover. A recent example of this is the bridge named Bhupen Hazarika Setu, inaugurated by Prime Minister Narendra Modi.

Constructed over the Lohit river, the bridge is supposed to give impetus to the people of Sadiya, a sub-division of Tinsukia district, and neighbouring areas of Arunachal Pradesh. It also aims to boost the country’s economy, hydropower and defence. It is ironic that until a decade ago there was immense anxiety and fear about the downstream impact in Sadiya by the mega dams proposed to be built on multiple rivers of Arunachal Pradesh. The inauguration of the bridge, however, ignited hope of mobility. Consequently, it also doubly increased the risk of further downstream impact on Sadiya, for the main purpose of the bridge lay elsewhere.

The politics of a bridge

Anthropologist Brian Larkin argues that rather than seeing infrastructures as neutral objects out there, one needs to understand the epistemological and political commitments that go into making of infrastructure. The hype created around the bridge is an interesting case of this politics. Before the inauguration, the transport ministry of the central government released a video of the bridge with deliberate misinformation of its location and purpose. While, the video depicts the bridge across Brahmaputra, it is in fact located on river Lohit. It is situated upstream to the point where the rivers Lohit, Siang and Dibang join to become the Brahmaputra, and it is due to its location that the bridge is also known as the Dhola-Sadiya Bridge. Additionally, even though this bridge has been hailed as an infrastructural marvel, it is not the first of its kind on the river Lohit.

On January 10 last year, the 2.9 kilometre long Alubari bridge on the same river was inaugurated in Lohit district of Arunachal Pradesh. Constructed by the Navayuga Engineering Company – which also undertook the construction of the Bhupen Hazarika Setu – the Alubari bridge involved laying out a new five kilometre-long approach road. The construction of this bridge went almost unreported. Yet another reinforced concrete bridge is being constructed over the river Sissri, a tributary of Dibang, which will connect Roing to Pasighat via Aohali-Dambuk road in eastern Arunachal Pradesh. In terms of connectivity within Arunachal Pradesh, more than the Bhupen Hazarika Setu, these two bridges hold more significance for the people of the state. This was reiterated in the words of the state’s chief minister, late Kalikho Pul: “The bridge is extremely important as it will connect rest of the eastern part of the state with the state capital… During summer, the entire Lower Dibang belt gets cut off and also frequent bandhs in Assam adds to the communication woes.” 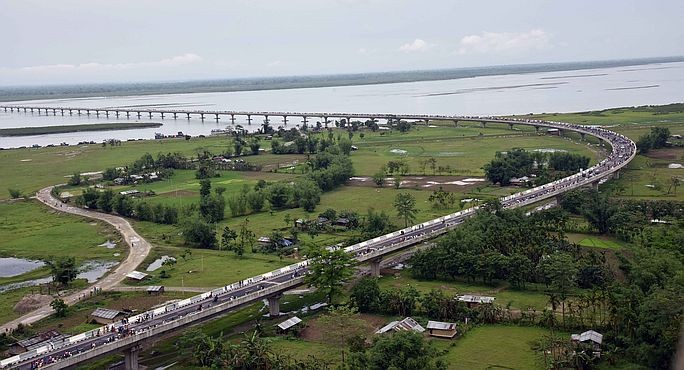 Along with increasing connectivity, giving strategic benefit to the Indian army has been cited as a major advantage of constructing Bhupen Hazarika Setu, giving them access to remote areas along the Indo-China border. Given the continuous tensions between India and China over Arunachal, this may seem temporarily plausible, but questions do arise. If connectivity through this bridge was so important for internal security, why was its construction taken up only in 2011? Besides, even after crossing this bridge, one has to cross hazardous terrains and fast flowing rivers before reaching areas bordering China.

The construction of such massive infrastructure, in such a short time, can be more closely associated with the development of large hydropower projects in Arunachal Pradesh. The purpose of constructing this bridge in the second decade of the 21st century is spelt out more clearly in the press release issued by the transport ministry when it was inaugurated.

It stated: “…besides facilitating numerous hydro power projects coming up in the state, as it is the most sought after route for various power project developers.” The argument that this bridge drastically reduces the distance between Dibang valley districts of Arunachal Pradesh (Upper and Lower Dibang valley) and Assam, needs to be understood in the context of the 18 large hydropower projects that are proposed to be constructed on the Dibang river basin with a projected capacity of nearly 10,000 megawatts. These hydropower projects also include the 2,880 megawatt Dibang Multipurpose Project, which is one of India’s largest multi-purpose dam projects.

The uncertain future of a remote place called Sadiya

Ever since the inauguration of the bridge, Sadiya, otherwise unknown to most Indians, has attracted a lot of attention. But this newfound fame may be shortlived. The New Ganga Bridge on river Ganga in Bihar, with a length of 9.18 kilometres, upon its completion, will soon overtake this bridge to become India’s longest bridge.

However, it is the downstream impact of the proposed hydropower projects in Arunachal Pradesh that poses greater threats to the material existence of Sadiya. Sadiya falls in the downstream region of two of the largest dams on Dibang and Lohit rivers – the 2,880 megawatt Dibang Multipurpose and 1,750 megawatt Demwe Lower Project. Incidentally, the probable impact of peaking power operations of these two dams along with the 2,700 megawatt Lower Siang Project on Dibru-Saikhowa National Park, an area downstream of Sadiya, had forced the Ministry of Environment and Forests to conduct an individual impact assessment study. Peaking power operation of a hydropower project implies running the project turbines during those hours of the day when electricity demand is high. Such peaking operations lead to extreme variation in the flows of a river on a daily basis.

There has, however, been a collective silence in the case of the likely downstream impacts of dams on Sadiya. According to the Dibang Basin study, if the Dibang multipurpose project is constructed, Sadiya will witness floods on an everyday basis in winter. The report says that against an average natural flow of 477 cumec in the winter season, due to peaking power operations of Dibang Multipurpose project, there will be only 114 cumec of water for 16-18 hours a day, while for the rest of the time the river will be flooded with 1,282 cumec of water.

Contrary to popular narratives in the national and state media, the bridge solves neither the existing problems of Sadiya, nor of the dwellers in the adjacent districts of Arunachal Pradesh. During the months of torrential rain, flood causes havoc and submerges the whole of Sadiya. After the flood water recedes, the silt, at times, covers up half of the bamboo and mud houses, and even entire tubewells, in places like Panch-mile, a village very close to where the bridge meets in Sadiya.

That apart, the inauguration of the bridge has led to a flow of tourists from the other side of Assam and northeast. Tourists often cross over to experience nature and most of them carry back cheap alcohol from Arunachal, as it is tax free. The majority of these tourists belong to the middle class who own four-wheelers. The Centre argues that the bridge will help in opening up economies, not only in Sadiya, but also in Arunachal. However,  in the backdrop of the complex socio-ethnic setup in the area and the contested resource usage, the bridge might open up certain historic binary relations between the hills and plains, its antagonisms and absences.

Apart from radio news broadcasts in Bangla from BBC Dhaka, and the reporting of the Sadiya massacre, the national media has remained apathetic towards the people of Sadiya and the nearby districts of Arunachal. (In 2000, 28 ‘non-Assamese’ people were gunned down by United Liberation Front of Assam (ULFA) near the Assam-Arunachal border in Sadiya which came to be popularly known as the Sadiya Massacre. The national print media like Hindustan Times dated December 9, 2000, reported of 28 people being killed, but the total numbers touched 40 plus.) The media’s recent vigour to report does raise questions about why and how such an out of the way place has become so intrinsic to the narrative of nation-building. There are several ways to answer this. For us, the people of Assam, the politics of infrastructure stands out as the most prominent one and we believe that celebrations around the Bhupen Hazarika Setu is nothing but a thin veil to cover the uncertain future of a place called Sadiya.