The priorities of the central and state governments seem to be misplaced in Assam. 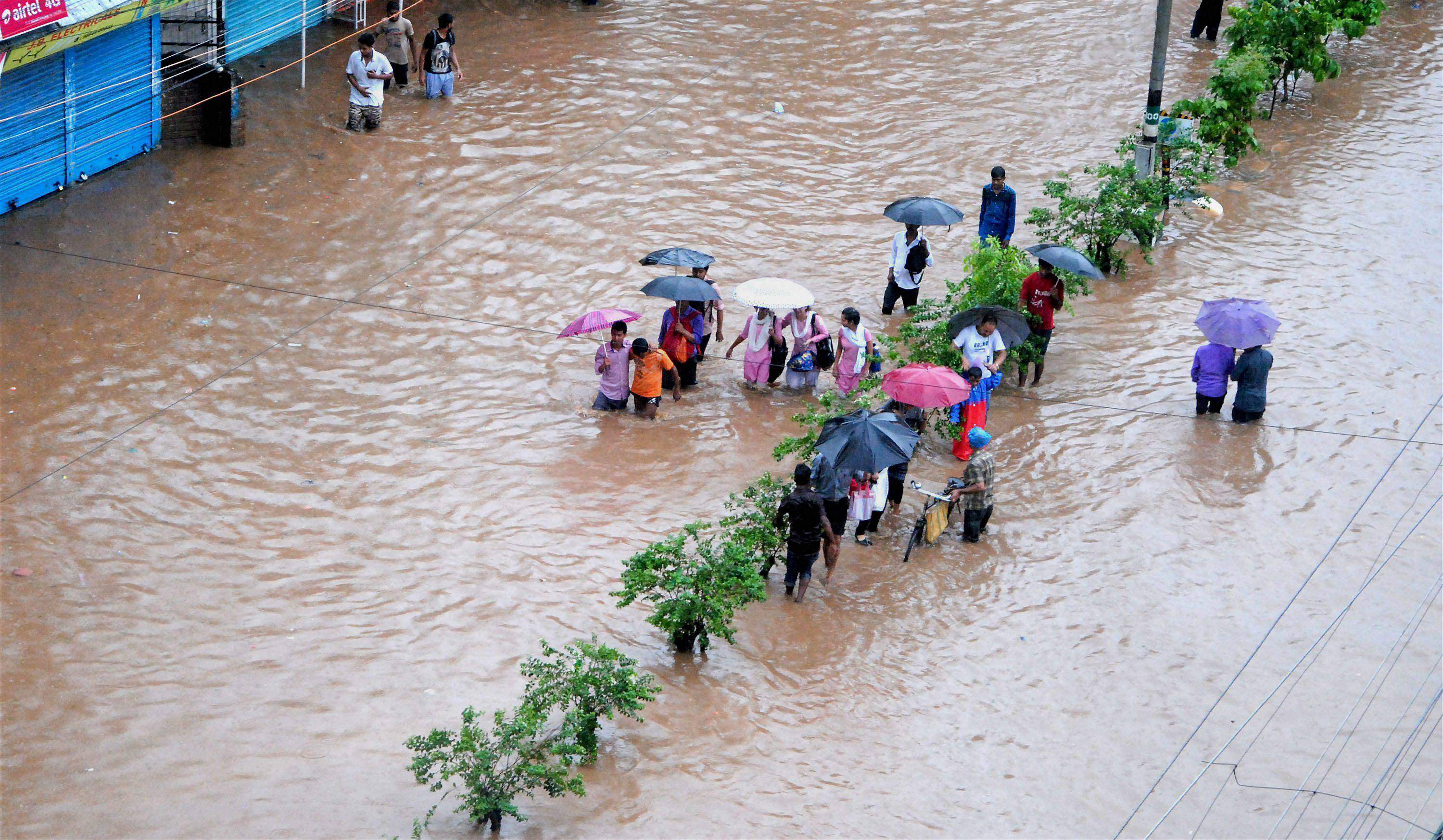 File picture of people wading through water after the floods in parts of Assam in June 2017. Credit: PTI

Incessant rains have taken the situation in Assam from bad to worse in the past one week. Though the water levels have receded below the danger level in a few districts, the situation continues to be forbidding. As many as 1,100 villages are still under water, 65 people have died of drowning or electrocution and over 17 lakh people have been affected across the Brahmaputra and Barak valleys. Poultry and agriculture have been adversely affected and, with close to 80% submersion, the Kaziranga National Park has undergone unprecedented damage. Mainstream Indian media devoted little attention to the floods in 2016 that affected about 16 lakh people, and the extent of coverage has only marginally improved this year. Having said that, the government’s callous approach to this almost annual calamity is equally, if not more, alarming and is rarely held up for scrutiny.

Most reports in the media speak of statistical facts around water levels, the number of villages and people affected, the death toll and so on. The idea of floods and consequent deaths in Assam every monsoon has been so normalised in the minds of the government, the media and a significant portion of mainland India, that a deeper inquiry into the reasons for the state’s plight seldom finds discussion on public platforms.

Breached embankments form a significant cause of the floods in Assam. The water released from the Ranganadi dam in Arunachal Pradesh recently caused the breach of about a 50-metre portion of an embankment in Lakhimpur, submerging several acres of land. The Lakhimpur district serves as the catchment area for the water released from this 450 MW hydroelectric project. Similar embankment breaches have occurred in the Majuli district. The Assam government has taken some action, sanctioning Rs 62 crore for the affected regions according to The Telegraph.

However, the indifference of the central government is beginning to show and priorities of the state government too appear to be misplaced. The recent ‘Namami Brahmaputra’ celebration is perhaps one of the starkest demonstrations of this fact.

In April this year, Guwahati hosted what is being publicised as the biggest river festival in India, ‘Namami Brahmaputra’. It was a five-day celebration, claimed by the ruling BJP government to have been organised in honour of the river Brahmaputra, to showcase Assam’s “cultural strength and economic importance” to the world and promote tourism. It was an extravagant multi-crore project with activities spread across 21 districts, marked by elaborate Varanasi-esque aartis conducted by priests specially brought in from Varanasi and attended by several state dignitaries. The event was inaugurated by President Pranab Mukherjee, with Union ministers including Babul Supriyo, Nitin Gadkari and Mahesh Sharma in attendance. The event was also attended by the Dalai Lama and Baba Ramdev (who briefly demonstrated his yoga moves as part of the cultural celebrations) amongst others.

Presumably, significant expenses were incurred for the publicity activities of the event, which included a high-definition music video featuring artists from across the country including Amitabh Bachchan, Kailash Kher, Usha Uthup, Vishal-Shekhar, Arijit Singh, Zubeen Garg and Papon, to name a few. While at first glance, Namami Brahmaputra may seem like a harmless, well-meaning effort to connect the state of Assam with the rest of the country, given the prevailing socio-political conditions of the state, such a celebration becomes problematic for a number of reasons. Believed to be modelled after the ‘Namami Gange’ mission aimed at cleaning and protecting the Ganga, the Assamese equivalent had no apparent environmental cause in mind. The name of the event itself ran in to controversy for its Sanskrit roots (“namami” translating to “I worship thee”), which is arguably an invisibilisation of the state’s indigenous heritage and a rather political implantation of North Indian Hindutva notions. The method of worshipping through aartis does not find resonance with a significant fraction of the Assamese population, especially the kshatriya culture which does not believe in idol worship. According to a local priest, traditional Assamese practice has been to revere the river but not worship it the way the Ganga is worshipped in North India. Given how little the locals could identify with the festival and the video that promoted it, it was seen by some as a patronising, Hindutva-heavy representation of mainland India’s fantasy of the river. 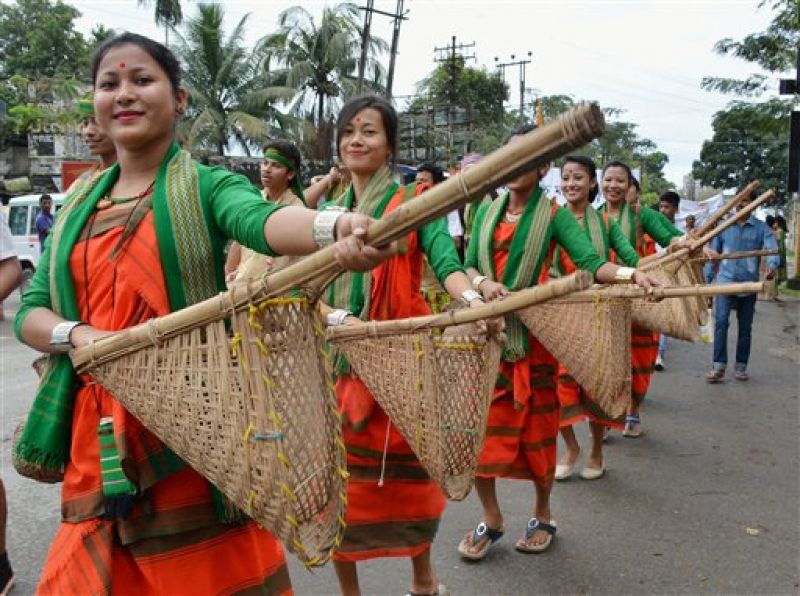 For all its emphasis on drawing mainland India’s attention to Assam, the response received by the state’s present condition from the mainstream media or even the government is appalling. More importantly, given Assam’s annual tryst with floods from an overflowing Brahmaputra, the Namami Brahmaputra festival, which met its expenses with taxpayers’ money, is symptomatic of a general disregard for the state’s needs and a blatant lack of prioritisation on the government’s part. During its state election campaign in 2016, the BJP represented by Sarbananda Sonowal promised specifically to look into flood-related issues and to dredge the river bed to increase the depth of the river and consequently reduce flooding.

Another significant cause of concern for the region arises from the mega-dam projects planned to be constructed in Northeast India, specifically Arunachal Pradesh and Assam. Given its geographic orientation, a significant fraction of Assam will be affected by the water released from these projects. During the BJP’s election campaign in 2014, the prime minister had categorically vouched to honour the region’s movement against large dams and focus on smaller projects to generate energy. Soon after the elections, the central government gave the nod to the 3000 MW Dibang valley mega dam in Arunachal Pradesh which once built, will sweep away approximately 4,500 hectares of forest area and displace indigenous people, particularly the Idu Mishmi community. It is particularly noteworthy that once functional, a significant portion of the power generated will be channeled out of the Northeast. Pending forest clearance after a recommendation issued by an Expert Appraisal Committee, the 3097MW Etalin hydropower project also continues to be a major environmental concern to Northeast India. In the past, the government has openly stated that with respect to the Northeast, environmental concerns may take a back seat as compared to the country’s strategic interests. While the promises won the BJP government sweeping victories on both instances, they were not subsequently honoured.

Quite evidently, there are issues that the government needs to prioritise and channel its spending towards. Given its enthusiasm to participate in the Namami Brahmaputra celebration, it is ironic that it took a good one week of incessant rains and accompanying loss of life and property before the central government extended its support to the state. Recently, Kiren Rijiju, Union minister of state for home affairs, visited Assam to review the situation in the state. It is about time we recognise that the region needs more than just ex post facto efforts on the part of the government. The present situation is demonstrative of the lackadaisical attitude of the authorities both at the state and the central levels – while the state government is visibly distracted, the central government unsurprisingly metes out a second-class treatment to the region, not considering promises made to voters worth honouring.

It is futile to celebrate the Brahmaputra if no active measures are taken to contain its annual wrath. Even after the floods recede, the state is plagued by various diseases, shortage of food supply and a serious lack of medical facilities. Embankment breaches must be minimised and rainwater effectively drained out so that the loss incurred during the monsoon can be tackled before it wreaks havoc. These are infrastructural expenditures that need to be undertaken on priority. There is no denying that efforts at enhancing the region’s connectivity with the rest of India and enhancing tourism are commendable; however, there are more alarming concerns that have not yet been tackled. It is not justifiable by any stretch of the imagination that money collected from the people is spent on celebrations they cannot understand or relate to, while hundreds of villages drown every year. In other words, Assam cannot afford the extravagance of Namami Brahmaputra. For the resources it holds and the exploitation it is subject to, the Northeast is yet to receive its due national attention, both in terms of governmental action and public awareness. Namami Brahmaputra is a textbook example of these misplaced priorities.