The public broadcaster has had to pay the salaries of its employees for January and February out of a contingency fund, says Surya Prakash, chairman of the Prasar Bharati board. 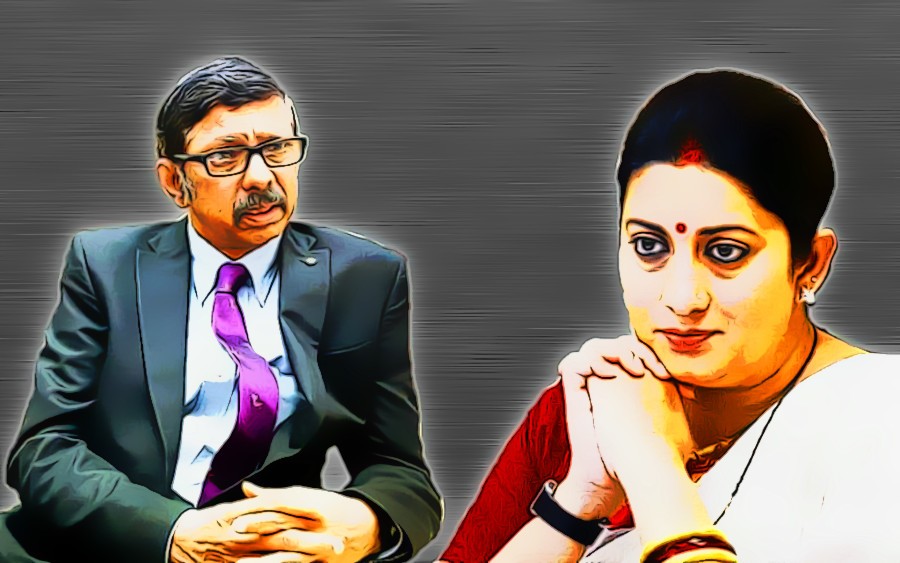 New Delhi: At war with Prasar Bharati over its refusal to pay nearly Rs 3 crore as fees to a private company at the cost of national television channel Doordarshan, I&B minister Smriti Irani has taken the unprecedented step of withholding funds the public broadcaster needs to pay the salaries of its employees.

As a result of her punitive action – unparalleled in the history of the government of India – Prasar Bharati (PB) has had to pay staff salaries for January and February out of a contingency fund, Surya Prakash, chairman of the PB board, told The Wire. If the standoff continues, the broadcaster will run out of money by April.

It’s a bit like finance minister Arun Jaitley making it hard for the RBI to pay its staff because he does not like the interest rates.

The Union government earmarked around Rs 2,800 crores in budget 2018-19 towards Prasar Bharati. The allocation is routed through the I&B ministry, which releases money to PB on a month-to-month basis for the salaries of its approximately 5,000 employees.

Prasar Bharati sources say that every month the ministry has been raising queries and creating problems before releasing the money. But since December, it has not released money for salaries, forcing a drawdown of contingency funds.

The crisis, they say, began after Surya Prakash, who heads the ‘autonomous’ institution, started questioning some of Smriti Irani’s actions.

Apart from rejecting the ministry’s demand that Doordarshan pay a private company Rs 2.92 crore for an assignment it says was unnecessarily outsourced, Prakash and his board angered Irani by blocking a move to fill two key editorial posts with journalists whose salaries would have been much higher than PB could bear.

Though the journalists were nominated by a search committee, Irani is said to have personally backed their selection. One of the nominees functions as her “unofficial media advisor”, ministry sources said.

At the Prasar Bharati board meeting on February 15, the I&B ministry’s representative, Ali Rizvi, allegedly threatened to withhold the money for employee salaries. “How dare you talk like this on a budget allocation?”, Prakash is said to have shouted, leading to heated arguments. “The monthly transfer of salaries to government staffers working in Doordarshan and All India Radio is a budget commitment … it does not come from your home,” Prakash said, sources familiar with what transpired in the meeting told The Wire.

DD and AIR have around 1000 of their own staff including casual and contract employees. Their salary bill has to be met from Prasar Bharati’s own revenue. But there are more than 5000 Central government employees whose emoluments come from Central funds.

Controversy over selection of private firm

While the appointments issue has gone on to a back-burner for now, the ministry’s insistence on DD paying a private company for the footage it provided from the International Film Festival of India (IFFI) held recently in Goa has led to an open revolt in Mandi House, where Prasar Bharati is headquartered.

Right from the time the film festival started, Doordarshan has always covered the inauguration and the closing ceremony. But in 2017, soon after getting the coveted I&B portfolio, officials say that Irani abruptly “snatched” this away from DD. She did not even bother to give any reasons for this on file, senior officials familiar with her decision told The Wire. She also transferred the management of IFFI from the ministry’s directorate of film festivals to the public sector National Film Development Corporation (NFDC). The NFDC then gave exclusive telecast rights for IFFI to a Mumbai-based company, SOL Production Private Ltd, an independent production house run by Fazila Allana and Kamna Nirula Menezes, both of whom had earlier worked for the Ronnie Screwvala production house, UTV. SOL was set up in January 2003 and some of its shows include Koffee with Karan season 1 and 2 and Nach Baliye season 1 and 2.

Ministry sources say that since Irani has known the two women from her days as an actor, the award of the contract raised eyebrows. The Wire repeatedly asked Irani to clarify her relationship, if any, with SOL’s owners and why they had been awarded exclusive telecast rights to IFFI. Despite three detailed questionnaires and text reminders, she chose not to reply. A questionnaire to I&B secretary N.K. Sinha also went unanswered.

SOL was promised an exorbitant fee of Rs 2.92 crores for its filming of IFFI despite there being no need for coverage which had always been mandated to Doordarshan. “DD has the capacity, equipment and staff to do the work,” an unnamed Doordarshan official was quoted by the Indian Express as saying. “We cover big events like Republic Day and International Yoga Day with more than 40 cameras. The event required only 15 cameras. So there was no need to hire an outside agency to do the work. That’s why the Board was told that it was not justifiable for Prasar Bharati to pay for such an activity and this could also invite audit objections.”

When Irani’s nominee on the PB board, Ali Rizvi, tabled an item on the need for SOL to be paid at the February 15 meeting, the broadcaster finally rejected the demand citing the reasons given above.

Though Irani saw red, several ministry officials told this correspondent that they agreed with DD’s stand that it was wrong to hire a private company, that too at well above industry costs, and then expect Doordarshan to foot the bill. Says a senior official who was tasked with ensuring that payment to SOL happens, “Why should private players benefit at the cost of the public exchequer? Why should Mumbai industry people gain at Doordarshan’s cost? Prime Minister Modi should have seen the clear cut potential for conflict of interest before appointing Irani as I&B minister.”

Rizvi came on to the PB board in October 2017 after Irani removed additional secretary Jayashree Mukherjee.  Sources say this was done because Mukherjee refused to act as a “pliable instrument” on the board.

Other Irani-induced transfers include Bharti Vaid, a senior Indian Information Service officer, who was additional director general at the Press Information Bureau in Srinagar. She was forced to resign on November 24 last year after a run in with the minister. Vaid had two more years of service left but decided to quit. Vaid refused to comment for this story.

Currently, all Indian Information Service officials are up in arms against Irani and have written a memorandum to Modi on “mindless transfers”.

In their letter, the association has pointed out that Irani has issued a number of transfer orders affecting one-fourth of the IIS cadres – around 140 officers out of less than 500 group A officials – in the past two months. Transfers, say ministry sources, is Irani’s favourite weapon. The moment she is displeased with an official, a transfer order is on its way. Says another official who plans to put in his papers after repeatedly being humiliated, “She is like the queen in Alice in Wonderland – it’s ‘off with your head’. I have never in my entire service of more than 25 years dealt with a more whimsical and arrogant minister.”

Irani transferred the IIS officers association’s president Anindya Sengupta on February 28 with immediate effect after he complained to the PMO about her “mindless transfers”. Sengupta was working as director of Doordarshan News in Delhi and has been sent to the ministry’s Publications Division – perceived as a “punishment” for speaking out against Irani.

After she took over in July 2017, Mandi House sources say that Irani has acted as a “super censor”, pulling up Doordarshan for its coverage and criticising it for not splashing stories which are “reflecting the success of the GOI”.

With Prasar Bharati now rising up in revolt, brace yourself for a re-run of the soap opera the nation witnessed during Irani’s contentious tenure as education minister when students from Jawaharlal Nehru University were labeled “anti national”.