The epidemic began in October and grew until December. It then dwindled but was never brought fully under control and cases have been surging since April. 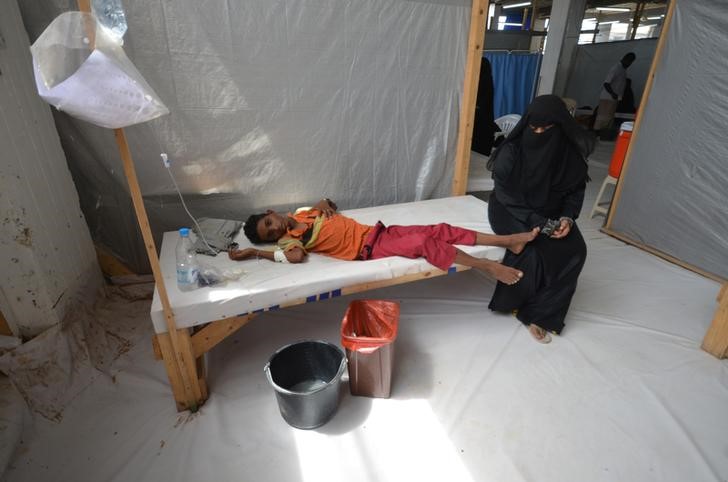 A woman sits next to her son who is infected with cholera at a hospital in the Red Sea port city of Hodeidah, Yemen May 14, 2017. Credit: Reuters/Abduljabbar Zeyad

Geneva: The number of cholera cases in Yemen has leapt, a World Health Organisation (WHO) document showed on Tuesday, May 23, with 35,217 suspected cases since April 27, when the outbreak began to spread rapidly.

That represents a 50% increase in the reported incidence compared with figures given last Friday by the WHO representative in the country, Nevio Zagaria, who said at that point there had been 23,425 cases since April 27.

A WHO epidemiology bulletin covering the period up to May 22 said 361 deaths had been reported, mainly in western governorates of Yemen. That is a rise of more than 100 since Friday, when Zagaria said 242 people had died.

The epidemic began in October and grew until December. It then dwindled but was never brought fully under control, and a new surge in cases began in April, worsened by the collapse of the economy and the health system.

The total number of cases reported since December stands at 61,000, the bulletin said. Zagaria said last week that the total could reach 300,000 in the next six months.

Caused by ingesting the Vibrio cholerae bacterium from water or food contaminated with faeces, cholera usually manifests itself with a sudden onset of acute watery diarrhoea and can kill within hours, although three-quarters of infected people show no symptoms.

The short incubation period means outbreaks can spread with explosive speed, especially in places without safe water and proper sanitation, according to the WHO.

Yemen has been ruined by two years of civil war, with 18.8 million people needing humanitarian aid, many of them on the brink of famine. Less than 45% of the country’s health facilities are fully functional.