What the Refugee Crisis Tells Us About Europe

Overwhelmed by the prospect of granting refugee status to tens of thousands of West Asian Muslims, most European countries have reacted by simple throwing their moral compass away 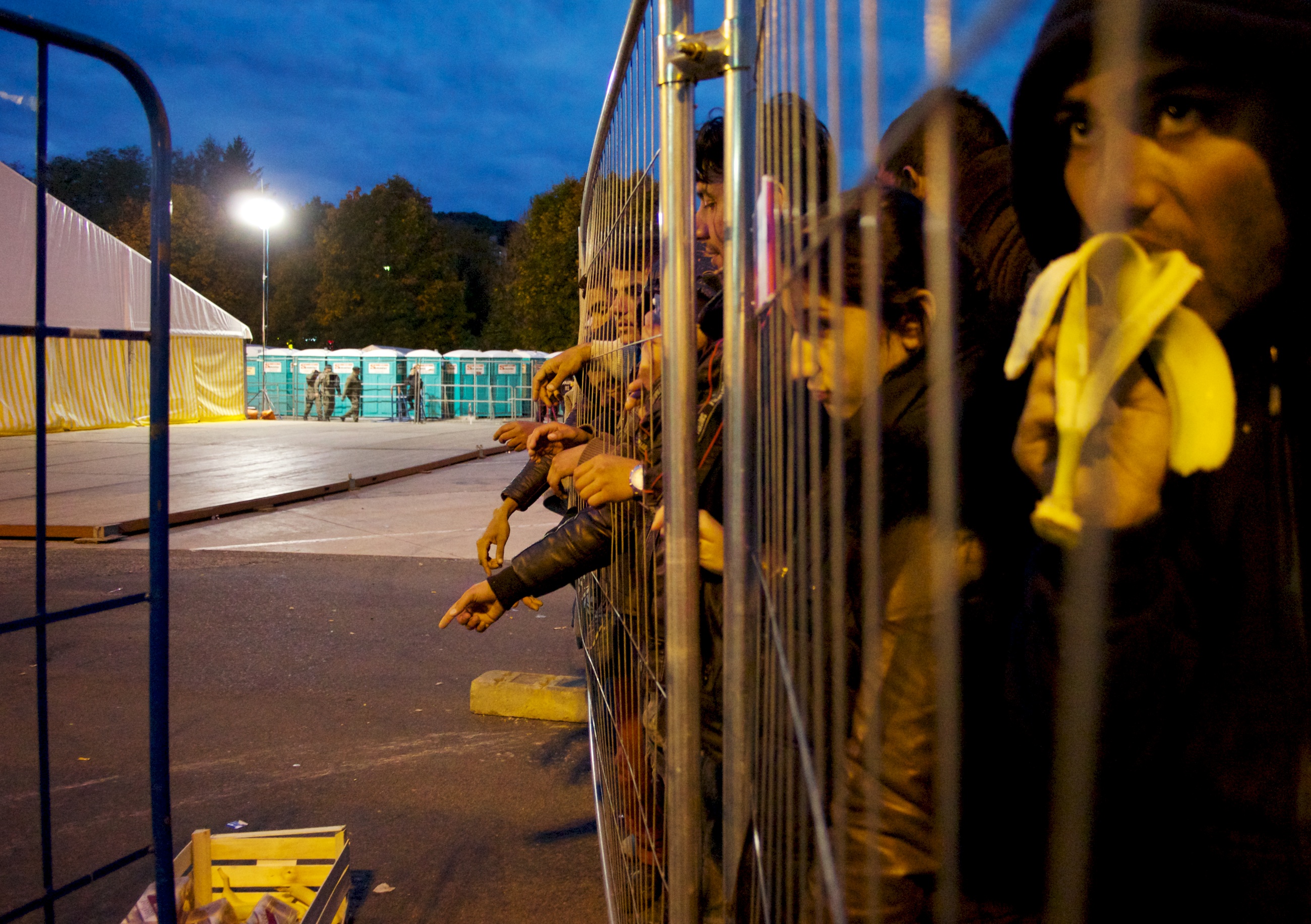 Refugees in the reception camp on the border with Slovenia at Spielfeld. Credit: Michael Gubi/Flickr CC BY-NC 2.0

The manner in which most countries of the Global North have responded to thousands of Muslim refugees fleeing conflict hot-spots in the Middle East raises deep questions about their liberal and democratic credentials. Much of Europe but also Australia and North America’s response to the refugee crisis is discriminatory and borders on unstated racism. It is a response that exposes their inability to be comfortable with idea of a multi-racial, multi-religious democracy.

Since the end of World War II, these countries owned the human rights narrative as a proprietary feudal asset. They lectured the Global South on human rights. They used it as a tool of their foreign and economic policy. They spoke passionately about the universalisation of human rights. But in 2015, as refugees from West Asia stream into Europe, all these fine princples have been cast aside.

The Western media has conveniently supported the narrative of their governments by calling the refugee crisis “a migrant crisis” – terminology that, as Al Jazeera rightly noted, “dehumanises and distances” the plight of people fleeing from violence. But why is the debate over words so desperately important? Because European countries want to escape all accountability under international law.

A refugee is a person who is outside the country of his nationality and cannot return to it for ‘fear of persecution’ on grounds of race, religion, nationality, membership of a particular social group or political opinion. This ‘fear’ must be ‘well-founded’ for the grant of refugee status by international organisations like the UN. If the “fear of persecution” is unfounded then a person who is seeking refugee status can be deported.

There is a civil war raging in large tracts of Syria, Iraq and Libya. So under the UN definition, all people ‘fleeing’ conflict hot-spots in West Asia and North Africa are doing so ‘owing to well-founded fear of persecution’ and thus should be given refugee status. Especially since Western countries cannot escape responsibility for engineering these bloody civil wars through their regime change geo-politics.

Stunned by the scale of the refugee influx and shocked by the prospect of granting refugee status to tens of thousands of West Asian Muslims, European countries – most of whom are narrowly focused on ensuring social cohesion – would rather call this a “migrant crisis” and stick to their Fortress Europe immigration policies. Europe wants to keep Muslim refugees out. They have done this simply by throwing their moral compass away.

Instead of embracing this principle, the consensus in the corridors of powers in Europe has been to put the fleeing Muslim refugees at risk by closing their borders. Article 33 of the UN Refugee Convention, 1951, enjoins states not to “expel or return (refouler) a refugee in any manner whatsoever to the frontiers of territories where his (or her) life or freedom would be threatened on account of his race, religion, nationality, membership of a particular social group or political opinion.” Many Europeans leaders, despite the sensitivity some of them have demonstrated towards the plight of the refugees, have decided to stand the application of this international law principle on its head.

The current refugee situation is now also a global crisis of responsibility and the UN system and all leaders of the world need to come together to ensure that those fleeing war and repression are treated in a safe, orderly and dignified way. As Prime Minister Stefan Löfven of Sweden – the largest per capita receiver of asylum seekers in Europe – told the General Assembly’s 70th session, “We should dramatically increase the number of resettlement places, expand legal avenues for migration, and base all our efforts on the principle of non-refoulement and the right to seek asylum. And it is extremely urgent that all countries of the European Union treat the people seeking refuge in the Union in a spirit of humanity, solidarity and shared responsibility.”

However, other EU states have either refused to take part in allocation schemes, or, like Hungary and Bulgaria, have put up fences around their borders to keep refugees out. Tens of thousands of persons have entered Hungary in recent months, mostly en route to Germany and other northern European countries, but Hungarian law makes it illegal for civilians in Hungary to help them get there, prohibits offering free rides to people who’ve entered the country illegally and without a visa and even grants Hungarian police and military extraordinary powers to search private homes if they suspect someone of harbouring illegal migrants. Refugees at Keleti station, Budapest. In the background is a poster celebrating ’25 years of the picnic that changed Europe’, a reference to the opening of eastern European borders following the collapse of the Warsaw Pact Credit: Michael Gubi/Flickr CC BY-SA 2.0

Clearly, European governments are seeking to deflect from what is their collective responsibility – and failure. The Common European Asylum System (CEAS), which was created in the 1990s, was not equipped to handle such large numbers. The 1997 Dublin Regulation – which compels asylum seekers to ask for protection in the first EU country they enter – has resulted in countries like Greece and Italy playing host to thousands of refugees as they happen to be the easiest and closest to reach by sea. Besides, it disregards the fact that many countries of first asylum may lack the political will and institutional capacity to provide asylum seekers what they deserve. The EU urgently needs to create a new paradigm for division of responsibilities as the quota system is failing. Hungary has announced it could join Slovakia in mounting a legal challenge to the EU’s flawed refugee quota system, which was approved despite opposition from the Czech Republic, Hungary, Romania and Slovakia. Meanwhile Croatia has banned Serbian citizens and cars from entering the country after Serbia banned Croatian cargo traffic in a growing dispute over migrants. Europe desperately needs a comprehensive refugee policy which incorporates the dimension of cooperation beyond national borders.

What the mirror is reflecting today is the utter failure of political leadership and collective political imagination in the face of nativist anxieties over possible demographic and cultural change. Germany was the only country that showed some signs of moral leadership by agreeing to suspend application of the Dublin Regulation for arriving Syrian refugees but that too was short-lived. It is the only country which has opened its doors and borders to all those searching for refuge and a safe haven and is now expecting to take in about 800,000 asylum seekers by the end of this year – more refugees than the 626,000 the entire European Union took in last year. Ordinary Germans in cities like Munich donated so much that the police had to ask them to stop because they were overwhelmed with the sheer volume of aid items.

But Europe’s status quo remains unfriendly to refugees. The problem today has assumed unmanageable proportions because Europe is struggling to bridge the huge gap between political realism and the need for a policy response embedded in empathy. While the EU made a collective resettlement commitment for 20,000 refugees, this adds up to only 10 per cent of the total Syrian refugee population, as the latter, according to UNHCR statistics, may be as large as 400,000.

The sheer inadequacy of the international legal framework on refugees is accompanied by the timidity of agencies like the UNHCR, which quietly noted that it “continues to be greatly concerned by forcible returns or barriers placed by some countries preventing the entry of asylum-seekers and refugees” but is unwilling or unable to say or do more. The entire world is witness to the European unwillingness to implement Article 33 of the Refugee Convention. This failure is magnified when seen in the context of another fact – poorer countries in Asia and Africa carry the bulk of the world’s refugee burden.

The recent EU emergency summit only succeeded in throwing money at aid agencies and transit hosting countries and will perhaps help in stepping up the identification and finger-printing of refugees in Italy and Greece by November. Where the EU has failed is in agreeing on ways of offering asylum seekers legal protection, in being unable to create more legal pathways for refugees to reach safety in Europe. In his statement, UN Secretary General Ban ki-Moon also appealed to the EU to acknowledge the rights of refugees and migrants and to provide them with protection, calling on European leaders to do more to ensure a dignified and humane reception and claim processing of the thousands of men, women and children seeking protection in Europe. He also recalled that refugees, asylum-seekers and migrants have inalienable rights that must be respected, including the right to claim asylum, and that states must abide by their international obligations, especially the principle of non-refoulement.

India, despite being a non-signatory to the Refugee Convention, has traditionally been a generous host country to refugees spilling onto its territories across its international borders. India has historically maintained an open door policy for refugees and even granted long term visas and work permits to them. In the absence of national asylum legislation, the UNHCR conducts registration and refugee status determination (RSD), and facilitates the resettlement of vulnerable groups. But India’s refugee policy has been ad hoc and politically expedient. While third generation Tibetans living on Indian soil even have voting rights today, many Sri Lankan refugees languish in prison-like conditions in camps. Refugee groups like Rohingya Muslims have a hard time finding homes and jobs on Indian soil and with the recent securitisation angle, tend to be looked at through the lens of suspicion. Nonetheless people from mostly all neighbouring countries – Hindus from Pakistan, Afghanis, Bhutanese, Nepalese, Bangladeshis, Burmese Rohingyas and Sri Lankan Tamils – have sought and received de facto sanctuary on Indian soil for years now.

If there was ever a moment when the entire architecture of modern international law has been so summarily put to disuse, then this is it. Now is the time for developing countries to take the lead in co-creating new approaches in international law, upholding existing guidelines for refugees while pushing for even more humane standards.

Priyanca Mathur Velath is an alumnus of the Refugee Studies Programme at the University of Oxford and currently teaches Political Science at St. Joseph’s College, Bangalore & Shashikumar Velath is a journalist and currently a Leadership Group Member in Ashoka – Innovators for the Public