The Yemeni population shall be, subject to "the largest famine the world has seen for many decades with millions of victims", if humanitarian aid is not urgently provided. Shi’ite Muslim rebels hold up their weapons during a rally against air strikes in Sanaa March 26, 2015. Credit: Reuters/Khaled Abdullah 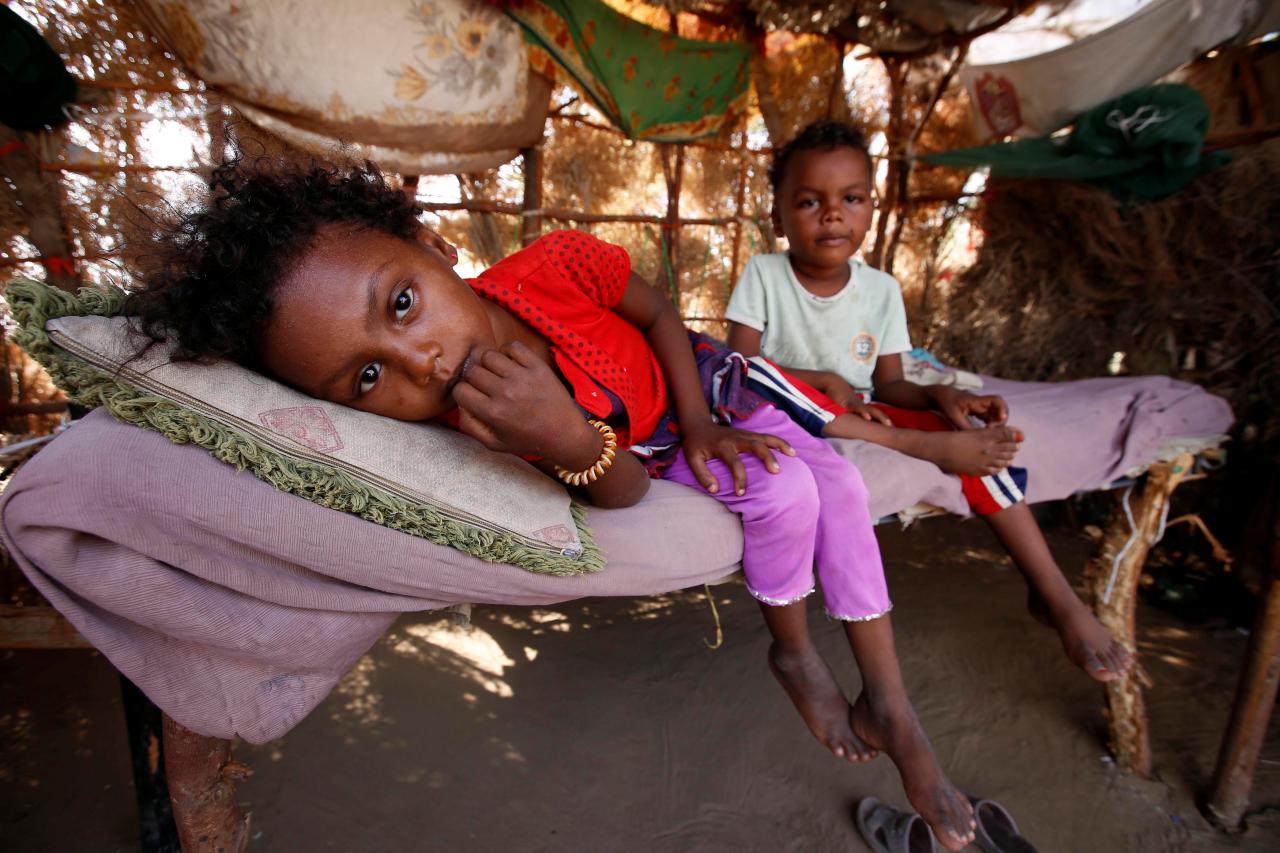 Children rest on a bed at their family hut at a poor neighbourhood on the outskirts of the Red Sea port city of Hodeida, Yemen November 12, 2017. Credit: Reuters/Abduljabbar Zeyad

On December 26, a crowded market in the Al Hayma district in Yemen was hit by airstrikes from a Saudi-led coalition that left 54 civilians dead, including eight children with 32 others injured.

It was the latest bloody episode in a conflict that has been raging for a thousand days and claimed 10,000 victims with 20 million more (from a population of 28 million) in dire need of assistance.

The UN Humanitarian Co-ordinator for Yemen, Jamie McGoldrick, has described the conflict as “absurd” and “futile”, characterised by “the destruction of the country and the incommensurate suffering of its people.”

The Saudi Coalition airstrikes began in March 2015 in response to Houthi rebels’ seizing control of much of Yemen in late 2014. There was widespread disillusionment in Yemen with Saudi-backed president, Abed Rabbo Mansour Hadi, whose transitional administration was dogged by corruption, unemployment and food insecurity.

The Houthi uprising forced Hadi to flee abroad in March 2015 which signalled the start of Saudi airstrikes. On the larger canvass of Middle-East relations and current tensions, the Sunni Saudis accuse the Houthis of being proxies for Shia Iran, their main regional rival.

Yemen’s impoverished civilian population has been caught in the middle of this contagion of hostilities with Human Rights Watch finding in 2016 that 60 per cent of civilian deaths resulted from air strikes.

It reported that “[a]irstrikes have damaged or destroyed numerous civilian objects including homes, markets, hospitals, and schools, as well as commercial enterprises” which “appear to be in violation of international law.”

This assessment is based on the monitoring of attacks that “do not discriminate between military targets and civilian objects.” “Taken together”, the report argues, “the attacks on factories and other civilian economic structures raise serious concerns that the Saudi-led coalition has deliberately sought to inflict widespread damage to Yemen’s production capacity.”

The effects of the conflict have been compounded by an air, land and sea blockade of Yemen imposed from November 2017 by Riyadh allegedly “to stem the flow of arms to the Houthis from Iran.”

The blockade of Yemen’s Hodeida port in particular has been disastrous for a country “90 per cent dependent on imports“, 70% of which came through the port.

The war and blockade has pushed some seven million people to the brink of famine and left nearly 900,000 infected with cholera.

Mark Lowcock, who co-ordinates humanitarian affairs and emergency relief for the UN, has said that without urgently needed humanitarian aid, Yemen would be subject to “the largest famine the world has seen for many decades with millions of victims.”

Jamie McGoldrick has denied that Yemeni rebels are smuggling arms through Hodeida port saying that a UN verification mechanism had “never found any weapons” on arriving ships.

As with the Israeli ten-year siege of the Gaza Strip, we are witnessing the collective punishment of a civilian population in Yemen for political ends.

The blockades of both Gaza and Yemen are causing enormous humanitarian suffering, are man-made disasters and could easily be lifted with political will.

Western governments have been fuelling the Yemeni crisis through lucrative weapon sales to Riyadh used in Saudi’s three year bombing campaign. Amnesty International has argued that:

“Countries such as the USA, UK and France, which continue to supply coalition members with arms, are allowing Saudi Arabia and its allies to flagrantly flout international law and risk being complicit in grave violations, including war crimes.”

Amnesty urges these countries to: “immediately halt the flow of arms and military assistance to members of the Saudi-led coalition for use in Yemen. This includes any equipment or logistical support being used to maintain this blockade.”

The UK has licensed $4.6 billion worth of arms sales to the Saudi regime, a relationship described as ‘shameful’ by Campaign Against Arms Trade, given Riyadh’s record as “one of the world’s most authoritarian regimes.”

And the US has “designed and negotiated a package totalling approximately $110 billion” with Riyadh in 2017 following on from a total of $115 billion approved in arms sales by the Obama administration in 2009-2016.

Su-ming Khoo has argued that “[i]n conflict situations, the deliberate, indiscriminate and criminal targeting of civilians and civilian structures such as hospitals and schools marks an all-time low in respect for the most basic humanitarian norms and laws.” This is underscored by the Human Rights Watch World Report 2017 which warns against a “global assault on human rights.”

Yemen appears to be a prime example of this deterioration in the climate for human rights which, perhaps, really took root in the ‘war on terror’ that followed the September 9, 2001 attacks on Washington and New York.

Even in the context of new ‘lows’ in the application of international laws and norms, the scale of the Yemeni crisis should cause international alarm and provoke immediate action to end hostilities, particularly the Saudi airstrikes and blockade.

A besieged and starved population has been pushed to the brink of famine and is already subject to malaria, dengue fever, diphtheria, and cholera. This is a moment when the UK, US and France should re-evaluate its relationship with Riyadh and the diplomatic and humanitarian poisoning caused by their trade in arms.

Stephen McCloskey is Director of the Centre for Global Education, a development non-governmental organisation based in Belfast.