The fast-escalating political showdown in Venezuela has taken over 100 lives and injured thousands more since the anti-government unrest began in April. 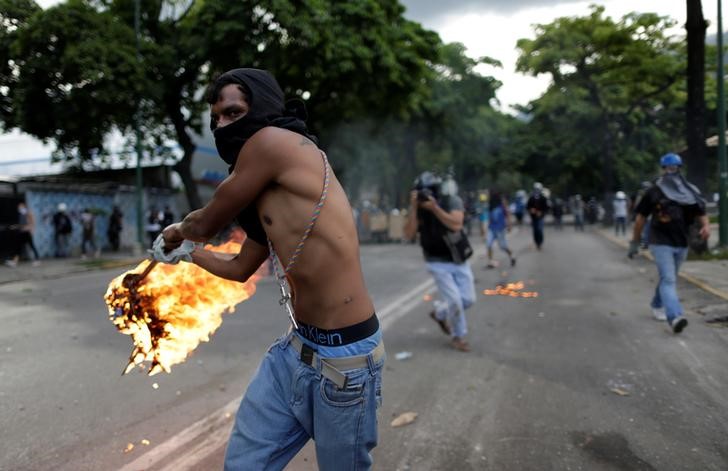 Caracas: Venezuela’s opposition called a two-day national strike against President Nicolas Maduro after another day of violent clashes on Saturday where the injured included a violinist famous for his musical protests.

The opposition coalition – which organised a 24-hour shutdown this week that was heeded by millions and paralysed large swathes of the South American nation – said the next strike would be on Wednesday and Thursday.

Mass marches were also planned for Monday and Friday in an effort to force Maduro into aborting a controversial July 30 election for a new congress.

The fast-escalating political showdown in the South American OPEC nation comes after more than 100 people have died and thousands more been injured in anti-government unrest since demonstrations began in April.

“The Venezuelan people are not giving up, they are valiant, they will come out to defend democracy and the constitution,” opposition lawmaker Simon Calzadilla said at a news conference flanked by other coalition officials.

Foes accuse Maduro of turning Venezuela into a dictatorship and wrecking what should be a prosperous economy. They want free elections and an end to two decades of socialist rule.

Maduro, 54, calls himself a flag bearer for the international left, up against right-wing “terrorists” seeking a coup with the connivance of the United States and foreign media.

On Saturday, several thousand protesters sought to march on the pro-Maduro Supreme Court in support of alternative magistrates appointed by the opposition. But security forces blocked them with armored cars and riot shields.

The injured included musician Wuilly Arteaga. The 23-year-old has become famous for playing the national anthem on his violin in front of security lines as battles rage around him.

Paramedics attended Arteaga in the street as blood poured down his face. He later tweeted a video from hospital with a bandaged face and clutching his violin.

“Neither rubber bullets nor pellets will stop our fight,” said Arteaga. “Tomorrow I will be back in the streets.”

The opposition is stepping up street tactics in what it dubs “hour zero” for Venezuela to try and block the new Constituent Assembly that Maduro wants to create next weekend. The opposition is boycotting that vote, calling it a sham and demanding conventional elections instead.

The Constituent Assembly, whose election rules appear designed to guarantee a majority for the government even though it has minority popular support, could re-write the constitution and disband the existing opposition-led legislature.

At rival pro-government rallies on Saturday, candidates for the Constituent Assembly said it was the only way to bring peace to Venezuela. “All of us united are going to tell the right wing ‘We’ve had enough of terrorism’,” Maduro’s wife Cilia Flores, who is running for an assembly post, told a rally.

As well as domestic protests, foreign pressure has been growing on Maduro, including a threat from US President Donald Trump to apply economic sanctions.

But the government is showing no sign of backing down, announcing that it will put 232,000 soldiers on the streets to protect voters. “In eight days, we will have the Constitutent Assembly,” Maduro said on state TV on Saturday night, where at one point he sang along to John Lennon’s “Imagine”.

He accused his foes of plotting a coup similar to the brief 2002 toppling of his predecessor Hugo Chavez, and said his government was ready for “any scenario” that may arise.

“I would like to have good relations with Donald Trump, shake his hand, hold a conversation, and tell him that we are in the 21st century not the times of colonialism,” Maduro added.

Also on Saturday, the government’s intelligence service arrested lawyer Angel Zerpa, one of 13 people sworn in as Supreme Court magistrates by the opposition in defiance of the government.

Confirming the detention, Venezuela’s state prosecutor’s office, which has broken with the Maduro administration, called it “illegitimate”. Opposition leaders were outraged.

Earlier at the protests in Caracas, National Guard forces could be seen firing tear gas canisters horizontally at demonstrators in contravention of international norms.

At least a dozen people were injured, the opposition said.

“The repression has been brutal,” opposition leader Maria Corina Machado said. “The world has to understand what we are living through in the streets of Venezuela.”