US SC Rejects Trump Bid to Include Grandparents Under Travel Ban

But in a partial win for Trump, the court gave the government more leeway to enforce a separate ban on refugees included in a March 6 executive order. 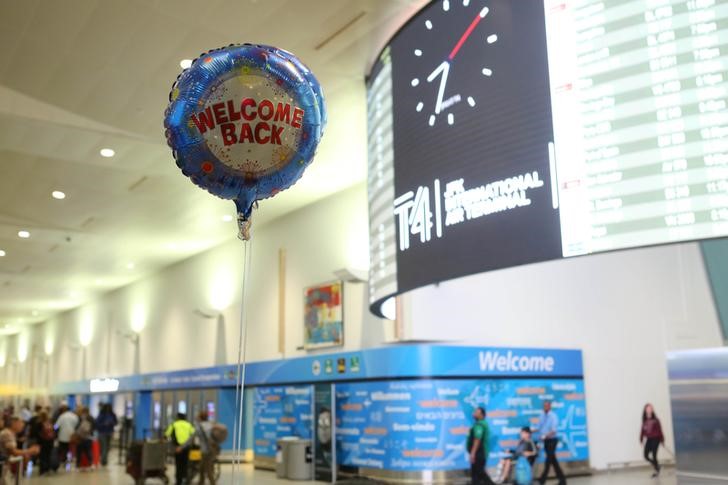 A balloon reading "Welcome Back" is seen at the arrival hall at Terminal 4 of JFK airport after US President Donald Trump's limited travel ban was approved by the US Supreme Court, in New York City, US, June 29, 2017. Credit: Reuters/Joe Penney

Washington: The US Supreme Court rejected on Wednesday a bid by President Donald Trump to include grandparents and other relatives of Americans in his travel ban on people from six Muslim-majority countries.

But in a partial win for Trump, the court gave the government more leeway to enforce a separate ban on refugees that was included in a March 6 executive order the president said was necessary for national security.

A federal judge had ruled against the government on the scope of both bans last Thursday, prompting the administration to seek Supreme Court intervention.

The high court‘s mixed decision means that, for now, grandparents, grandchildren, aunts, uncles, nieces, nephews, cousins and siblings-in-law are not covered by the 90-day travel ban on people from Iran, Libya, Somalia, Sudan, Syria and Yemen who want to enter the US.

The court‘s action on refugees could block entry of up to 24,000 refugees who have a connection to a US resettlement agency, according to court papers. The Trump administration has said that even if all 24,000 were able to travel, not all of them would have been able to do so during the 120 days the refugee ban is in effect.

The brief order said the court‘s decision is temporary while the San Francisco-based 9th US Circuit Court of Appeals considers a separate appeal on the same issue. Three of the conservatives on the court of nine justices noted that they would have granted Trump‘s request in full.

In a statement, the US Department of Justice said it “looks forward to presenting its arguments” to the 9th Circuit.

Hawaii attorney general Douglas Chin, who challenged the bans in court, said in a statement that his office also is preparing arguments for the appeals court on the refugee issue. Chin said the Supreme Court had validated Hawaii’s position “that the Trump administration over-reached in trying to unilaterally keep families apart from each other.”

Naureen Shah, senior director of campaigns at Amnesty International USA, said in a statement that the decision on refugees “jeopardizes the safety of thousands of people across the world including vulnerable families fleeing war and violence.”

The Supreme Court also announced on Wednesday that it has scheduled oral arguments on broad questions on the lawfulness of the ban for October 10.

The Trump administration last Friday asked the high court to overturn a decision on Thursday by US District Judge Derrick Watson in Hawaii, which limited the scope of the administration’s temporary ban on travellers and the 120-day ban on refugees.

The latest round in the fight over Trump‘s executive order began after the Supreme Court intervened last month to partially revive the two bans. Both had been blocked by lower courts.

The Supreme Court said then that the bans could take effect, but that people with a “bona fide relationship” to a US person or entity could not be barred.

The administration had narrowly interpreted that language, saying the ban would apply to grandparents and other family members. Hawaii asked Judge Watson to expand the definition of those who could be admitted and he ruled in favour of the state.