The affair took on a more political flavour than usual with a hostile administration in the White House which has shown scant concern towards queer issues. 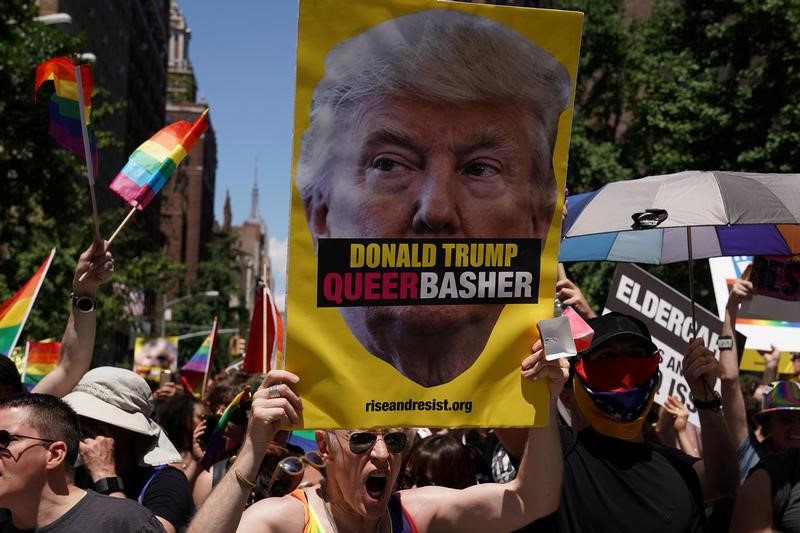 New York/San Francisco: Large crowds turned out for Pride marches on Sunday in New York City and San Francisco, the two US places most associated with the lesbian, gay, bisexual and transgender rights movement, with the East Coast city bringing a more political flavor to the event sparked by events there almost 50 years ago.

“Honored to represent the ACLU at this years NYC Pride March,” Manning said on Twitter, posting a photo of her riding in a red convertible. “Started to lose my voice from screaming so much,” Manning, who was released from a military prison in May, added.

A group of marchers heading down New York’s Fifth Avenue carried photographs of US President Donald Trump and his press secretary, Sean Spicer, as others waved banners bearing the word ‘RESIST’ and the rainbow flag of the Pride movement.

In contrast, a smattering of anti-Trump signs in San Francisco was drowned out by a desire to let loose. “It’s too good a day to be upset about Trump,” said Richard Babb, 66, of San Francisco.

In New York, Brad Hoylman, a Democratic lawmaker in the New York State Senate, said lesbian, gay, bisexual and transgender people were “under assault” by the Trump administration.

“He already rolled back rights for transgender students, for example, and the list is on and on,” he said. “So we have a lot more work to do, that’s why we are here today.”

As a candidate, Trump promised to protect gay people. But his move in February to revoke the Obama administration’s guidance letting transgender students choose which gender bathroom they use, and his executive order last month to promote religious liberty have been seen by some as discriminatory.

The New York march’s grand marshals this year include the American Civil Liberties Union, which was chosen for its history of litigation defending gay rights; Brooke Guinan, a transgender woman who works as a firefighter in the city; and Geng Le, a gay rights activist in China. 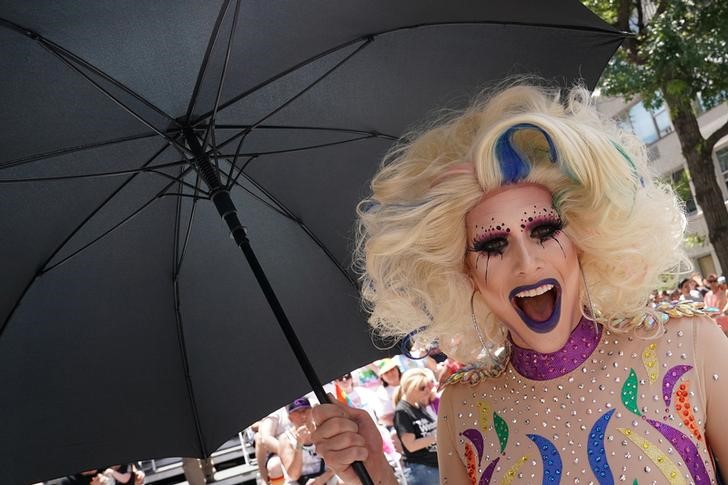 “Pride this year is showing that we are here, we are queer, and we are not going to sit down for anything less than full rights, full equality,” said Austin Anderson, a 28-year-old advertising worker at the New York event.

The march route ends on Christopher Street in Manhattan’s West Village to commemorate the riots that broke out there in 1969 after police raided the Stonewall Inn, a gay bar, in an event seen as a turning point in the gay rights movement. New York’s first Pride march started close by a year later.

In San Francisco, revellers had to pass through one of dozens of metal security detectors to get into the main plaza.

“Happy Pride everyone!” a security monitor yelled to the crowd, as people cheered and saluted. “Have fun today.”

“We see this as a party, not a political protest,” Qiaira McPeters, 18, said. Despite that, McPeters said that she feels things for gay people have been getting worse.

“Gay people are getting beat up all the time,” she said.

In Seattle, hundreds of people marched downtown in unusually hot weather, many in skimpy outfits and carrying pink balloons. A rainbow flag was hoisted to the top of the city’s iconic Space Needle.

Seattle Mayor Ed Murray, the first openly gay person to hold that job, joined the parade with his husband, Michael Shiosaki. “Today we celebrate our unity,” he said in a video posted on Twitter.

The Seattle Police Department, which put rainbow-coloured decals on their patrol cars, said a group of people blocked the parade route for about 30 minutes to hold a sit-in in honour of Charleena Lyles, the black mother slain by city police a week ago. There were no arrests, police said.