Amid US Pressure, Palestinians Blacklisted at the UN

US ambassador Nikki Haley has said would block any appointment of a Palestinian official to a senior role at the UN because Washington “does not recognise Palestine” as an independent state. 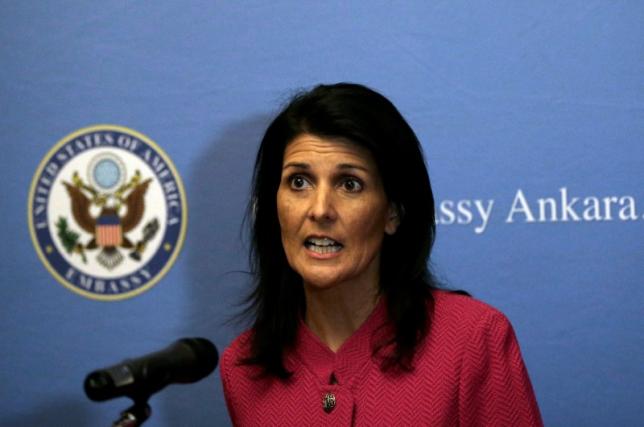 US Ambassador to the United Nations Nikki Haley speaks to the staff at the U.S. Embassy in Ankara, Turkey, May 23, 2017. Credit:Reuters

UN: When Secretary-General Antonio Guterres proposed the appointment of former Palestinian Authority Prime Minister Salam Fayyad as UN’s Special Representative in Libya back in February, the proposal was shot down by US ambassador Nikki Haley, purely because he was a Palestinian.

And speaking in front of the US House Appropriations State and Foreign Operations Subcommittee in June, Haley went even further down the road when she indicated she would block any appointment of a Palestinian official to a senior role at the UN because Washington “does not recognise Palestine” as an independent state.

Suddenly, the Palestinians, for the first time, seem blacklisted – and declared political outcasts – in a world body where some of them held key posts in a bygone era.

Nadia Hijab, Executive Director of Al-Shabaka: The Palestinian Policy Network, told IPS: “As the US administration appears to be steering a breakneck course towards a nuclear war with North Korea, it is little short of remarkable that its representative at the UN can find time to continue her vendetta against the Palestinian people while Israel, a serial violator of the international law the UN was created to uphold, is able not only to sit at the UN but to serve on key committees.”

Instead of blocking Palestinians from their rightful place in the community of nations, ambassador Haley would do better to push for an end to Israel’s occupation of Palestinian land conquered in 1967 and welcome a fully sovereign state of Palestine to the UN, said Hijab, who is of Palestinian origin, and once served as a senior staff member of the UN Development Programme (UNDP).

“I wonder if ambassador Haley is aware that, because Israel has colonised their country, Palestinians carry the nationality of many other countries around the world, including the United States. How far will she take her crusade against this beleaguered people?” she asked.

In most instances, Palestinians working at the United Nations have been nationals of UN member states, acquiring citizenship in countries such as UK, US, Jordan, Canada, Kuwait, Saudi Arabia and Lebanon, among others.

Since 2012, Palestine has been a “non-member observer state” at the UN – as is the Holy See (Vatican).

As one Arab diplomat speculated: “If Fayyad, who was educated at the University of Texas, was in fact also a US citizen, Haley may have blocked the appointment of an American, not a Palestinian.”

“But that’s a question only Fayyad can answer. If true, it will be an irony of ironies,” he added.

Guterres, who apparently relented to US pressure by stepping back on Fayyad’s appointment plucked up courage to tell reporters: “I think it was a serious mistake. I think that Mr Fayyad was the right person in the right place at the right time, and I think that those who will lose will be the Libyan people and the Libyan peace process.”

And, he rightly added: ““I believe that it is essential for everybody to understand that people serving the UN are serving in their personal capacities. They don’t represent a country or a government – they are citizens of the world representing the UN Charter and abiding by the UN Charter,” he said, pointedly directing his answer at Haley.

Samir Sanbar, a former UN Assistant Secretary-General who headed the Department of Public Information, told IPS that “traditionally, UN staffers need not renounce their loyalty to their home country, but they will have to take an oath of exclusive loyalty to the UN Secretary General which in effect places them as international civil servants, a once unique category recently, and systematically eroded.”

Other senior officials later served with Jordanian, Lebanese, Saudi, Syrian and other papers in addition to those like Assistant Secretary-General Khaled Yassir, who headed the audit department of UNDP and who apparently carried a Palestinian “Stateless” card at the time, said Sanbar, who served under five different UN secretaries-general.

He said a number of US/UN officials were flexible on their own government’s position on politically-sensitive issues such as Under-Secretary General Joseph Vernon Reed – former Protocol Chief of US President George Herbert Walker Bush – when he attended a General Assembly meeting in Geneva with the participation of PLO Chairman Yasser Arafat when he was rebuffed in New York.

As to the approach of Secretary-General Guterres, Sanbar said: “I am not on the inside to comment; yet it seems not yet clear whether he is bowing to pressure or exercising extra care, while undertaking extensive travel, in making consensus senior appointments, including those for heads of departments, some of whom were given short term extensions and others who are yet to be firmly designated.”

“Perhaps by the middle of next year, an informed perception will be clearer. Inshallah!” he declared.

Admittedly, to be frank, he said, there were occasional cases where certain individuals tried to exploit the rightful plight of the Palestinian people to their personal advantage. Yet, generally, most international civil servants, made a special effort to demonstrate impressive performance,” said Sanbar.

Meanwhile, after a visit to Lebanon last week, Haley was gunning for the head of the UN Interim Force in Lebanon (UNIFIL), Force Commander and Irish Major-General Michael Beary, and expressing regrets that he is not pursuing his mission of aggressively moving against the militant group, Hezbollah.

Asked for his comments, UN spokesman Stephane Dujarric told reporters: “First of all, I would say that we obviously stand by the Force Commander in UNIFIL and we have full confidence in his work. I think the men and women of UNIFIL are doing work in a very delicate area. They report regularly and faithfully on what they, on what they see and on what they observe.”

“I understand there is a debate ongoing within member states regarding the renewal of the mandate of UNIFIL. We will let that debate play out. It’s in the hands of the Security Council. It’s done under their authority,” he added.