North Korea's foreign minister likened US President Donald Trump to a "barking dog" on Thursday, after Trump warned he would "totally destroy" the North if it threatened the US and its allies. 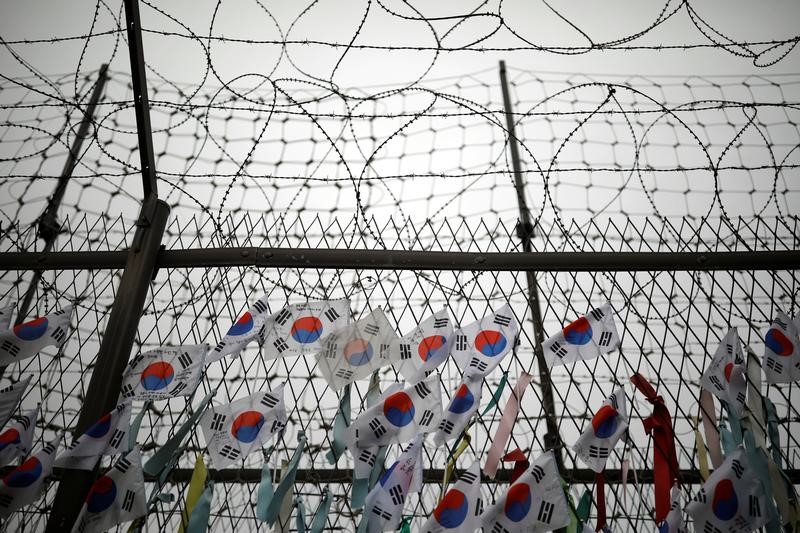 Seoul: South Korea approved a plan on Thursday to send $8 million worth of aid to North Korea, as China warned the crisis on the Korean peninsula was getting more serious by the day and the war of words between Pyongyang and Washington continued.

North Korea‘s foreign minister likened US President Donald Trump to a “barking dog” on Thursday, after Trump warned he would “totally destroy” the North if it threatened the US and its allies.

Chinese foreign minister Wang Yi said the situation on the Korean peninsula was getting more serious by the day and could not be allowed to spin out of control.

“We call on all parties to be calmer than calm and not let the situation escalate out of control,” Wang said, according to a report from the state-run China News Service on Thursday.

Meeting separately with his South Korean counterpart, Kang Kyung-wha, Wang reiterated a call for South Korea to remove the US-built THAAD anti-missile system, which China says is a threat to its own security.

The decision to send aid to North Korea was not popular in South Korea, hitting President Moon Jae-in’s approval rating. It also raised concerns in Japan and the US, and followed new UN sanctions against North Korea over its sixth nuclear test earlier this month.

The South‘s Unification Ministry said its aid policy remained unaffected by geopolitical tensions with the North. The exact timing of when the aid would be sent, as well as its size, would be confirmed later, the ministry said in a statement.

“We have consistently said we would pursue humanitarian aid for North Korea in consideration of the poor conditions children and pregnant women are in there, apart from political issues,” said Unification Minister Cho Myong-gyon.

UNICEF’s regional director for East Asia and the Pacific Karin Hulshof said in a statement before the decision the problems North Korean children face “are all too real”.

“Today, we estimate that around 200,000 children are affected by acute malnutrition, heightening their risk of death and increasing rates of stunting,” Hulshof said.

“Food and essential medicines and equipment to treat young children are in short supply,” she said.

The last time the South had sent aid to the North was in December 2015 through the UNPopulation Fund (UNFPA) under ex-president Park Geun-hye.

Although the approval rate is still high, those surveyed said Moon had fallen out of favour due to North Korea‘s continued provocations and the government’s decision to consider sending aid to North Korea, Realmeter said.

Moon will meet Japan’s Prime Minister Shinzo Abe and Trump later on Thursday on the sidelines of the UN General Assembly, where North Korea was expected to be the core agenda item.

In an address on Tuesday, Trump escalated his standoff with North Korea over its nuclear challenge, threatening to “totally destroy” the country of 26 million people if the North threatened the US and its allies.

“There is a saying that goes: ‘Even when dogs bark, the parade goes on’,” Ri said in televised remarks to reporters in front of a hotel near the UN headquarters in New York.

“If (Trump) was thinking about surprising us with dog-barking sounds then he is clearly dreaming,” he said.

North Korea conducted its sixth and largest nuclear test on September 3rd and has launched numerous missiles this year, including two intercontinental ballistic missiles and two other rockets that flew over Japan.

Such provocations have sparked strong disapproval from the international community, especially from the US and Japan.