Who’s Blaming Whom: US Government Shutdown Over Immigration Reform

Both the Democrats and the Republicans see this time as extremely important in framing the upcoming elections for the House of Representatives. 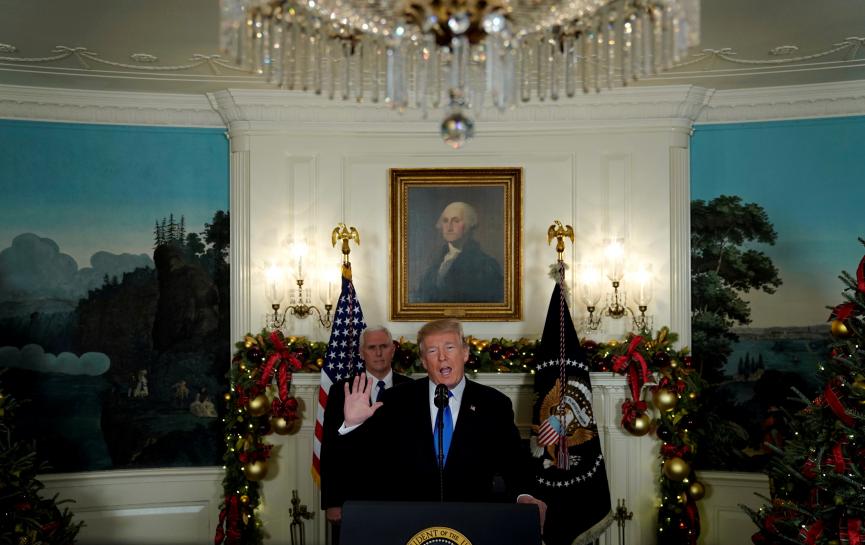 Trump said the Democrats were playing “shutdown politics” and ignoring the needs of the US military and safety “at our dangerous Southern Border” by not signing the deal the Republicans offered in the US Congress. Credit: Reuters

Washington: It’s not the best marker of a one-year anniversary but US President Donald Trump wants to blame the government shutdown solely on the Democrats, painting them as defenders of illegal immigrants while he works to limit their numbers.

It is a wildly ironic debate in a country founded by immigrants and one that has excelled in luring the world’s brightest at practically no cost. But these are very different times and the US may be at the cusp of a major shift in how it treats immigrants, especially those of the non-white stock.

If you are from a “shithole” country, a term reportedly used by Trump and then denied, and you are illegal, you might want to reconsider your future plans.

Illegal immigration has become such a hot political issue that it has shut the US government down. Neither of the two political parties is truly innocent if you cut through the thick layers of “messaging”.

Trump said the Democrats were playing “shutdown politics” and ignoring the needs of the US military and safety “at our dangerous Southern Border” by not signing the deal the Republicans offered in the US Congress.

Democrats in turn blamed Trump’s fluctuating stand on the fate of more than 700,000 potential immigrants brought to the US illegally as children as the main reason for the legislative war that led to the shutdown.

The number includes an estimated 7,000 Indians. South Asian advocacy groups such as South Asian Americans Leading Together (SAALT) are in the forefront of highlighting the plight of the young workers and students who have grown up in the US but don’t have a formal status.

Indian American lawmakers such as Congressman Raja Krishnamoorthi and Pramila Jayapal, both Democrats, have become increasingly vocal about defending their rights.

Although the Democrats are trying hard, many newspaper headlines on Saturday blamed the shutdown on them because technically, they did block continuation of government funding because they wanted concessions on immigration issues. But the Democrats insist on Twitter that it’s a #TrumpShutdown while the Republicans have the hashtag #SchumerShutdown.

At the heart of the debate is a programme designed by former president, Barack Obama, to protect children of illegal immigrants who grew up in the US and know no other country. The Deferred Action for Childhood Arrivals, or DACA, shielded the young from deportation at least temporarily until a long-term solution could be found.

Also read: Factbox: What is the Impact of the US Government Shutdown?

Immigration reform has been explosive even at the best of times – when more of a bipartisan spirit prevailed on major issues and before the Republican Party became hostage to its fringe right wing and the Democratic Party started drowning in identity politics.

Trump dialled up the debate many notches during the campaign and has stuck to his anti-immigrant stance. In his first year in office, he tried to slap a ban on some Muslim countries, started phasing out DACA, gave customs and immigration officials full authority to crack down and forced Americans to face the question of illegal immigration.

Today, even the debate terminology is weaponised. The Democrats call the DACA beneficiaries ‘Dreamers’, the Republicans label them as ‘illegals’. Is it “family reunification” when an Indian American sponsors his siblings and aged parents for a green card or is it “chain migration”? The branding – that unique American determinant – is an important part of the debate.

When Trump says the Democrats want “Amnesty for all”, he is hitting them where it hurts. The right-wing press made hay from a recently circulated memo co-written by Jennifer Palmieri, communications director of Hillary Clinton’s 2016 presidential campaign, which argues that protecting the Dreamers was a “critical component of the Democratic Party’s future electoral success.”

“If Democrats don’t try to do everything in their power to defend Dreamers, that would jeopardise Democrats’ electoral chances in 2018 and beyond,” Palmieri argues. She referred to mid-term Congressional elections three times in her memo that has gone viral in Trump land. 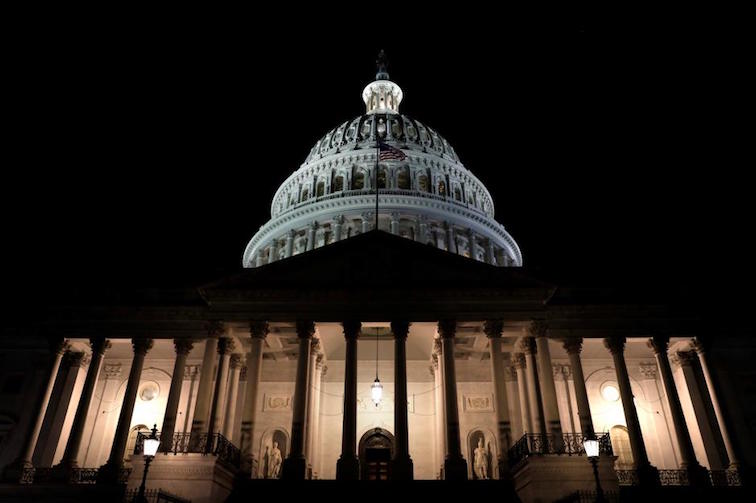 Illegal immigration has become such a hot political issue that it has shut the US government down.  Credit: Reuters

In this ferocious battle over immigration, the Republicans released ads and videos within hours of the shutdown on Friday, claiming that the Democrats only cared about illegal immigrants. Should the Democrats have forced the issue over the fate of undocumented immigrants, no matter how wrenching their plight?

A comment by Kevin Bryant, the Republican lieutenant governor of South Carolina, was typical. He mocked Schumer on Twitter with this: “Mexico isn’t a state. Why are you representing it?”

Hey, Chuck Schumer and Dick Durbin: Mexico isn’t a state. Why are you representing it? #SchumerShutdown https://t.co/n4qNWsSWnh

While it was typically hyperbolic, the subject has more resonance today than when Obama called Clinton a senator from Punjab.

Scratch the surface and many Americans, including Democrats, agree that illegal immigration is a serious problem. When asked about how the use of Spanish was replacing English in certain parts of California, a Democrat who is a practicing psychoanalyst agreed it was not a healthy trend because it would create enclaves that could ultimately lead to problems. Another talked about a town populated mostly by Indian Americans where kids in school had no other friends besides other Indians.

An Indian American involved in the IT sector said that people coming to the US for work have begun to look at temporary work visas as a right to immigrate. Complaining about long waits for a green card – sometimes as many as ten years – while working on a H1-B visa was “ridiculous”.

Krishnamoorthi, the Congressman from Illinois, passionately defends the H-1B visas on sensible economic grounds and calls the long waits many suffer as being in an “H1-B jail”. At a recent breakfast meeting with Indian journalists, he said that the Indian community in the US must be careful. “No matter how many times this White House celebrates Diwali or Trump says he loves India, his policies are targeting Indians and Chinese Americans.”

Trump is not really bothered because he has framed the debate cleverly. He says he wants “merit-based” immigration, and his audience agrees. His administration is also determined to stop what it calls “fraud” in the allocation of H-1B visas and has taken several measures to toughen the implementation of existing laws. Again, the average American does not disagree with Trump’s idea even if he cringes at some of Trump’s vocabulary.

No surprise that Trump and the Republicans smell blood. They sense that a significant percentage of the population no longer favours open doors. They want and increasingly can paint the Democrats with one brush as a party that cares more for illegals – an impossible label to fight off – than for “mom and apple pie”.

The Democratic leadership, which seems not to have fully absorbed the lessons of the shock defeat in 2016, still thinks it can win by pointing out Trump’s inconsistencies on policy positions. They seem to be fighting yesterday’s battles with day before yesterday’s tools while Trump stays a step ahead. They are frustrated by Trump’s shifts on issues.

“Negotiating with this White House is like negotiating with Jell-O. It is next to impossible,” Chuck Schumer, leader of the Senate Democrats, vented this weekend. Schumer met Trump a few times to negotiate a deal only to have the president walk back on the understanding.

Schumer even offered funding for building the infamous wall – anathema for Democrats – if Trump agreed to protect young undocumented immigrants. He thought he had a deal only to discover a few painful hours later that he didn’t.

Earlier this year, Trump actually seemed to cheer for a government shutdown, saying it would be good for the Republicans. Jesse Ferguson, a Democratic strategist and former Clinton campaign official, said Trump is like “the arsonist who hopes you come home and blame the neighbours for the blaze.”

Congressman Krishnamoorthi says he “relates to the dreamers whether they are Indians or Mexicans”. He came here very young with his parents – both legal immigrants but who had a tough start creating the American dream. He sees the undocumented Dreamers as a key to a brighter American future.

“Our workforce is aging. They are absolutely necessary for our economy.” A Princeton and a Harvard Law School graduate, Krishnamoorthi is seen as a rising star in the Democratic Party. His main plank is fighting for the middle class and a realistic and humane immigration policy.

A political compromise is surely possible but both sides see this time as extremely important in framing the upcoming elections for the House of Representatives. If the rest of the world wonders why the US government shut down for the third time in 25 years, so be it.