Created by Trump's predecessor, the DACA provides protection from deportation and work permits. 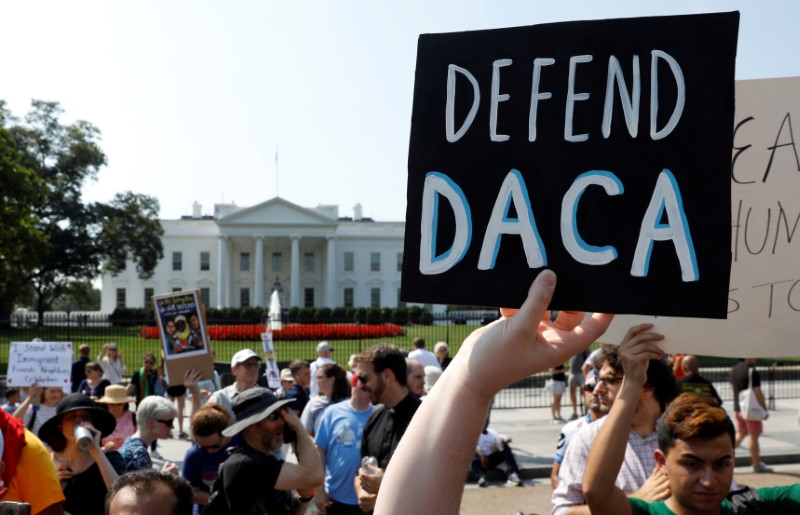 Demonstrators protest in front of the White House after the Trump administration today scrapped the Deferred Action for Childhood Arrivals (DACA), a program that protects from deportation almost 800,000 young men and women who were brought into the US illegally as children, in Washington DC, US, September 5, 2017. Credit: Reuters/Kevin Lamarque

Washington DC:  The US Supreme Court on Friday granted a request by President Donald Trump‘s administration to block the release of documents concerning his decision to end a programme that shielded from deportation hundreds of thousands of young adults dubbed “Dreamers” brought into the country illegally as children.

The nine-member, conservative-majority court, acting despite objections from its four liberal justices, put on hold an order by US District Judge William Alsup in San Francisco for the administration to turn over the internal documents by December 22 as part of lawsuits he is overseeing challenging the legality of Trump‘s September decision. One of the suits is led by California’s Democratic attorney general, Xavier Becerra.

The lawsuits accuse the administration of violating the US Constitution’s due process guarantee as well as statutory legal requirements in rescinding the Deferred Action for Childhood Arrivals (DACA) programme created by Trump‘s Democratic predecessor Barack Obama. Under Trump‘s action, the protections offered by DACA disappear in March.

The Supreme Court action will remain in effect until it decides whether to permanently block Alsup’s order. It gave the challengers until next week to respond.

Justice Department spokesman Devin O’Malley said the department “is pleased with the Supreme Court‘s decision today putting on hold the district court‘s overreach. The Department of Homeland Security acted within its lawful authority in deciding to wind down DACA in an orderly manner, and the Justice Department believes the courts will ultimately agree.”

Justice Stephen Breyer, joined by the three other liberal justices, wrote in a dissent that the action by the court‘s conservative majority will disrupt the progress of the DACA litigation. Breyer wrote that “judicial review cannot function if the agency is permitted to decide unilaterally what documents it submits to the reviewing court as the administrative record.”

Since its inception, the DACA programme has provided protection from deportation and work permits to about 800,000 mostly Hispanic young adults brought into the US illegally by their parents. At the time Trump announced the rescinding of the programme, about 690,000 people were protected under DACA.

Trump scrapped the programme as part of his hard-line immigration policies, calling DACA an unconstitutional overreach by Obama. Trump gave Congress until March to come up with new protections for the Dreamers.

Dreamers are a fraction of the roughly 11 million illegal immigrants in the United States.

A federal appeals court had upheld Alsup’s order that an expansive trove of documents be handed over, prompting the administration to turn to the Supreme Court.

Blocking the document release could hinder the lower court‘s ability to rule on the case before the programme expires, according to the plaintiffs.

Obama and his fellow Democrats have defended the programme as one that protects young people who grew up and were educated in the US and are Americans in every way but actual citizenship.