New Delhi: It was a busy week at the United Nations Security Council last week, with the passage of three resolutions, including one with a historic number of co-sponsors that called for a pause to armed conflict worldwide to allow equitable distribution of COVID-19 vaccines.

The UK ended their last week as council president in February with the adoption of Resolution 2565 that called on “all parties to armed conflicts engage immediately in a durable, extensive, and sustained humanitarian pause to facilitate the equitable, safe and unhindered delivery and distribution of COVID-19 vaccinations in areas of armed conflict”.

The UK is proud to lead this historic resolution to ensure that no one is left behind on vaccine access#VaccinEquity #OnlyTogether pic.twitter.com/mJslHwNT89

According to SC procedure, which has been documenting security council’s working methods, resolution 2565 also marked another historical record. It garnered the second-highest number of 112 co-sponsors in UNSC’s history.

The highest number of co-sponsors for an SC resolution related to another viral outbreak, seven years ago. In September 2014, the council adopted resolution 2177 – with 134 co-sponsors – that called on member states to respond to the Ebola outbreak urgently and refrain from isolating the affected countries.

The UK had submitted the draft resolution on vaccination ceasefire on February 18.

The Wire has learnt that India had initiated the inclusion in the resolution for language appreciating countries that have donated vaccines.

As the world’s largest manufacturing capacity of vaccines, India has been actively sending vaccines to countries as part of a diplomatic drive. According to the latest government figures, India has supplied 361,94,000 doses worldwide, out of which around 19% was delivered on a grant basis.

There had also been an attempt by the European Union (EU) countries to refer to regulatory requirements by vaccines. However, there was a strong pushback from developing countries, and it was not part of the final resolution, diplomatic sources said.

Additionally, the Security Council report revealed that Russia had successfully added a phrase from an earlier resolution that would refer to UN secretary-general’s appeal last year to waive sanctions that could undermine countries’ capacity to respond to the pandemic.

Besides resolution 2565, the Security Council adopted two more resolutions – sanctions on Yemen and resolution reauthorising deployment of the African Union Mission in Somalia.

Outside the formal proceedings, UNSC member Mexico organised an ‘Arria formula’ meeting to discuss the legal scope of Article 51 of the UN charter on February 24.

“Nothing in the present charter shall impair the inherent right of individual or collective self-defence if an armed attack occurs against a member of the United Nations, until the Security Council has taken measures necessary to maintain international peace and security. measures taken by members in the exercise of this right of self-defence shall be immediately reported to the Security Council and shall not in any way affect the authority and responsibility of the Security Council under the present charter to take at any time such action as it deems necessary in order to maintain or restore international peace and security.”

The concept note by Mexico about the discussions stated that it was to analyse the “interpretation that has been given to this provision of the Charter against non-state actors, in particular in the context of counter-terrorism, and regarding the precedents that the aforementioned actions could set for other cases in the future”.

Opening the meeting, Mexico rejected the cross-border use of force against non-state actors on grounds that the host state is unable to control them.

With the event taking place in the week marking the second anniversary of India’s airstrikes inside Pakistan, India, not surprisingly, asserted that there was a legal basis for applying the self-defence point in Article 51 against non-state actors.

India’s deputy permanent representative, K. Nagaraj, stated that the “source of the attack, whether a state or a non-state actor, is irrelevant to the existence of the right of self-defence”.

Nagaraj listed three criteria that allowed a state to make a cross-border strike inside another country to target a ‘non-state actor’.

“Non-state actors such as terrorist groups often attack states from remote locations within other host states, using the sovereignty of that host state as a smokescreen. In this regard, a growing number of states believe that the use of force in self-defence against a non-state actor operating in the territory of another host state can be undertaken if:

India also claimed that Security Council resolutions 1368 and 1373 have “formally endorsed the view that self-defence is available to avert terrorist attacks such as in the case of the 9/11 attacks”.

Nagaraj concluded that pre-emptive actions taken to “fight the menace of terrorism” were consistent with Article 2(4) of the UN charter as “such actions are not of reprisal, since their prime motive is for protecting the affected states’ national integrity and sovereignty”.

In its presentation, Pakistan apparently argued for the right to self-defence against a state allegedly sponsoring terror attacks, versus a state that is only acting as a territorial host. Pakistan has recently been claiming that India is supporting terror attacks from Afghanistan, which both countries have vehemently denied.

Sri Lanka’s permanent representative, Mohan Peiris, expressed concern about the increasing invocation of Article 51 to justify unilateral cross-border attacks against non-state actors. “These exceptional cases should not be considered as the new norm or evidence of state practice,” he said.

The Art on War

Before entering the chamber of Security Council, a visitor had to walk past a 25-foot long tapestry showing Pablo Picasso’s searing anti-war painting, Guernica. But, no more. The wall is now starkly empty.

So sad to see the Guernica tapestry removed from outside the UN Security Council – Nelson Rockefeller Jr asked for it back. Always hoped it would focus minds as diplomats marched into the chamber #UN pic.twitter.com/lBimlMUA4B

It had been hanging in the corridor since 1985 when it was loaned by Nelson Rockefeller, former US vice-president. His son wanted it back, and the UN returned it in early February.

From today's noon briefing: Guernica tapestry returned on request to owner Nelson Rockefeller Jr. The tapestry, a moving reminder of the horrors of war, hung outside the @UN Security Council stakeout for thirty-five years. pic.twitter.com/7Uiw23z9TI

“I feel a little sad and sense of loss, looking at the empty wall. It was not only a moving reminder of the horrors of war, but because of where it stood, it was also witness to so much history that unfolded outside of the Security Council since 1985,” UN spokesperson, Stéphane Dujarric told reporters on February 27.

This is truly sad. That wall without the tapestry is empty of meaning. This tapestry when hung somewhere else will lose much of its value. https://t.co/9kCwW75JCg

Picasso painted the iconic painting in 1937 to depict the bombing by Germany during the Spanish civil war. The original painting remains in Museo Reina Sofía in Madrid. The position of the tapestry of Guernica was highly symbolic as the Security Council is the only body in the United Nations that deals with threats to international peace and security.

Three replicas of the original Picasso painting were made in tapestry – the first of which was commissioned by Rockefeller in 1955 and made in France under Picasso’s supervision. The other two replicas are in Musée Unterlinden in France and Japan’s Museum of Modern Art. 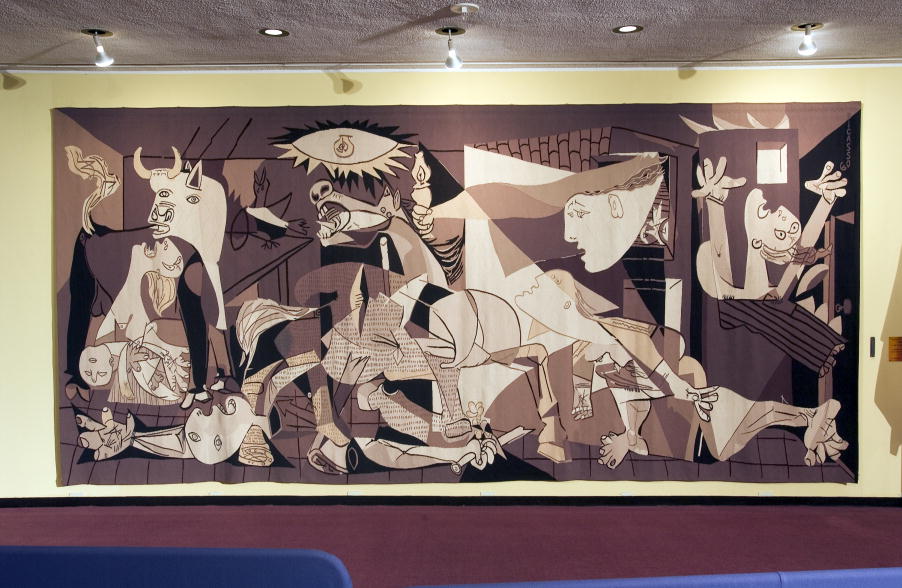 A view of the tapestry based on Pablo Picasso’s “Guernica”, which is on display outside the Security Council chamber at UN Headquarters, February 14, 2005. Photo: Flickr/CC BY-NC-ND 2.0

UN secretary-general Antonio Guterres told CBS News that he was dismayed that the tapestry was no longer in the UN. “It’s horrible, horrible that it is gone,” he said.

The empty wall will eventually showcase another gift – a reminder that the United Nations building has been furnished with donations of artworks from member states and individuals.

As Loraine Sievers, a former head of the UNSC secretariat, wrote in a recent paper, donating gifts to the United Nations by member states was always a political message. She listed four goals for states to make gifts – “1) to add to their stature at the UN; 2) to have on display visible representation of their national culture; 3) to symbolise their investment in the organisation’s mission and 4) to contribute to enhancing the aesthetics of the UN premises”.

India’s artistic gift to the UN building is an 11th-century sculpture of the Sun God, Surya. It was handed over in 1982 and is displayed on the second floor of the UN’s conference building.

This week at the UN

The United States will take over as the president of the Security Council for March. After being confirmed by the US senate, the US’s permanent representative, Linda Thomas-Greenfield, presented her credentials to Guterres last Thursday.

The full calendar of events for March will be clear once the provision programme of work is adopted on Monday.

Towards the end of the week, Indian envoy T.S. Tirumurti will be chairing the Council’s Libya Sanctions Committee to discuss the report of the panel of experts. This report is then expected to be made public. It is highly anticipated, as the report apparently documents the involvement of Blackwater founder Erik Prince in violations of an arms embargo.