Understanding Why Ukraine's Forces Give up Crimea Without a Fight

Sergei Yeliseyev, who was first deputy commander of the Ukrainian fleet when unmarked Russian soldiers quietly took control of Kiev, has a new job: deputy chief of Russia's Baltic Fleet. 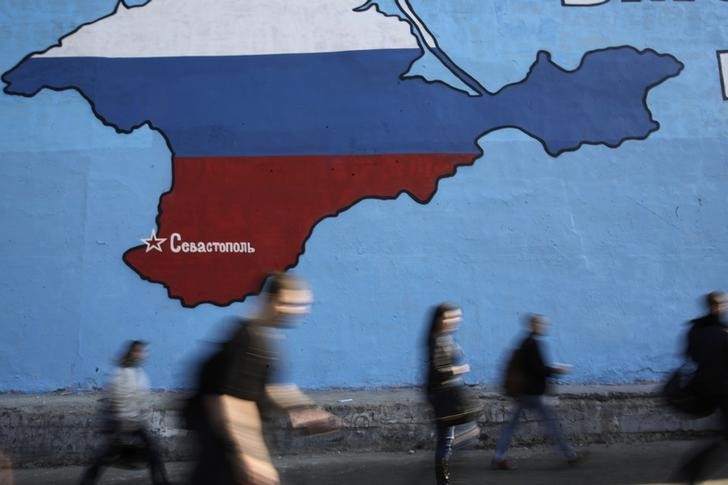 People pass a mural showing a map of Crimea in the Russian national colours on a street in Moscow March 25, 2014. Credit: Reuters/Artur Bainozarov

Kiev/Sevastopol, Crimea: The career of Sergei Yeliseyev helps to explain why Ukraine’s armed forces gave up Crimea almost without a fight – and why NATO now says it is alert to Russian attempts to undermine military loyalty in its eastern European members.

His rise to become number two in the Ukrainian navy long before Russia seized Crimea illustrates the divided loyalties that some personnel in countries that once belonged to the Soviet Union might still face.

Yeliseyev’s roots were in Russia but he ended up serving Ukraine, a different ex-Soviet republic, only to defect when put to the test. NATO military planners now believe Moscow regards people with similarly ambiguous personal links as potentially valuable, should a new confrontation break out with the West.

In 2014, Yeliseyev was first deputy commander of the Ukrainian fleet, then largely based in Crimea, when Russian soldiers in unmarked uniforms took control of Kiev’s ships and military bases on the peninsula.

Instead of resisting, Yeliseyev quit and subsequently got a new job: deputy chief of Russia’s Baltic Fleet. Yeliseyev, now aged 55, did not respond to Reuters questions sent to him via the Russian defence ministry.

In Kiev, however, there is no doubt where his loyalties lay. “When he took an oath to Ukraine, these were empty words for him. He has always been pro-Russian,” said Ihor Voronchenko, now commander of the Ukrainian navy, who once served with Yeliseyev.

In fact, the Russian soldiers were pushing at an open door in late February 2014 – Yeliseyev was just one of many to defect and almost all Ukrainian forces in Crimea failed to resist.

Russia annexed Crimea the following month, prompting a major row with the West which deepened over Moscow’s role in a rebellion in eastern Ukraine that lasts to this day.

At the time, Moscow and its allies in Crimea exploited weaknesses within Kiev’s military to undermine its ability to put up a fight, according to interviews conducted by Reuters with about a dozen people on both sides of the conflict.

The Russian defence ministry did not respond to questions on their accounts of the events in 2014 submitted by Reuters.

One NATO commander told Reuters that, in a re-run of the tactics it deployed in Crimea, Russian intelligence was trying to recruit ethnic Russians serving in the militaries of countries on its borders.

Speaking on condition of anonymity, the commander said the alliance was particularly sensitive to the risk in countries with high concentrations of ethnic Russians, notably the Baltic states.

NATO had to guard against this, said the commander, though the risk should not be overstated because having Russian roots did not necessarily mean that a person’s loyalty is to Moscow.

Officials in the Baltic states, former Soviet republics which unlike Ukraine are NATO members, play down the danger.

NATO Secretary-General Jens Stoltenberg likewise said he trusted the armies of the Estonia, Latvia and Lithuania. Still, he told Reuters: “We always have to be vigilant. We always have to develop our intelligence tools and to be able to see any attempts to try to undermine the loyalty of our forces.” 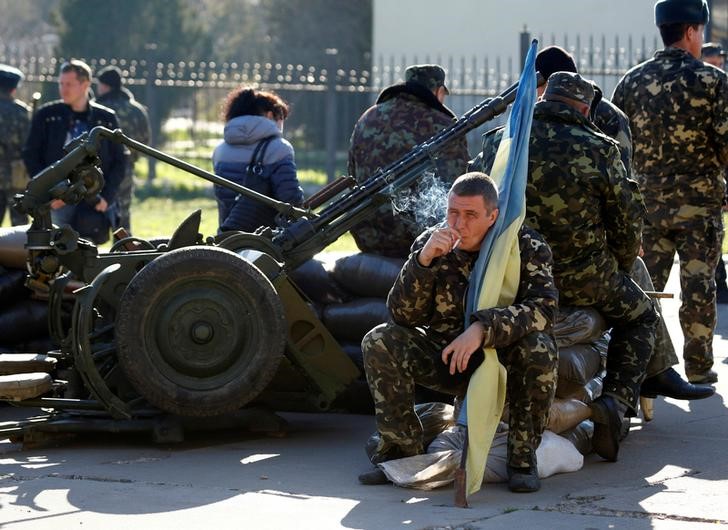 A Ukrainian serviceman holds a flag of Ukraine and smokes at a military base in the Crimean town of Belbek, near Sevastopol, Ukraine March 22, 2014. Credit: Reuters/Shamil Zhumatov

Years before the Crimean annexation, a Ukrainian appointment panel appeared to drop its guard when it interviewed Yeliseyev for the deputy naval commander’s post.

Yeliseyev was born near Moscow, graduated from a Soviet naval school in the Russian city of Kaliningrad in 1983 and served with the Russian Pacific fleet.

So the panel asked Yeliseyev what he would do if Russia and Ukraine went to war. He replied that he would file for early retirement, according to Myroslav Mamchak, a former Ukrainian naval captain who served with Yeliseyev. Despite this response, Yeliseyev got the job in 2006.

Mamchak did not disclose to Reuters how he knew what was said in the interview room but subsequent events bear out his account.

Relations between Russia and Ukraine dived as Kiev moved closer to NATO and eight years after his appointment, with the countries on the brink of conflict over Crimea, Yeliseyev stayed true to his word by quitting.

Russia’s actions were not the only factor in the Crimean events. Ukraine’s military had suffered years of neglect, there was a power vacuum in Kiev after the government was overthrown, and many Crimean residents felt more affinity with Moscow.

Still, Ukrainian service personnel with Russian ties switched sides when the annexation began and some officers pretended to put up resistance only to avoid court-martial. Moscow also intercepted orders from Kiev so they never reached the Crimean garrison.

“There was nothing spontaneous. Everything was organised and each fiddler played his role,” said Mykhailo Koval, who at the time was deputy head of the Ukrainian border guard and is now deputy head of the Security Council in Kiev.

Voronchenko, who was another deputy commander of the navy at the time of the annexation, said he had received invitations to defect to Moscow’s side soon after the Russian operation began.

These, he told Reuters, came from Sergei Aksyonov, who was then head of Crimea’s self-proclaimed pro-Russian government, as well as from the commander of Russia’s southern military district and a deputy Russian defence minister.

Asked what they offered in exchange, Voronchenko said: “Posts, an apartment … Aksyonov offered to make me defence minister of Crimea.” Neither Aksyonov nor the Russian defence ministry responded to Reuters questions about the contacts.

Voronchenko, in common with many other senior Ukrainian officers, had been in the Soviet military alongside people now serving in the Russian armed forces. He had spent years in Crimea, where Russia leased bases from Ukraine for its Black Sea fleet after the 1991 break up of the Soviet Union. 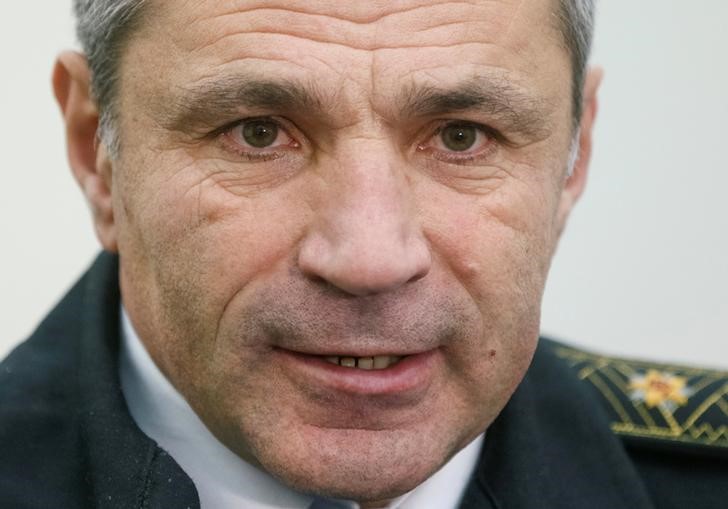 “Those generals who came to persuade me … said that we belong to the same circle, we came from the Soviet army,” he said. “But I told them I am different … I am not yours.”

Naval chief Denis Berezovsky did defect, along with several of his commanders, and was later made deputy chief of the Russian Black Sea fleet.

Many in the ranks followed suit. At one Ukrainian signals unit, service personnel were watching Russian television when President Vladimir Putin appeared on the screen.

“To my surprise, they all stood up,” said Svyatoslav Veltynsky, an engineer at the unit. “They had been waiting for this.” The majority of the unit defected to the Russian side.

Even those willing to resist found themselves in a hopeless position. One member of the Ukrainian border guards told Reuters how his commander had despatched their unit’s ships to stop them falling into Russian hands, and ordered his men to train their rifles on anyone trying to enter their base.

However, the base’s military communications were not working, having been either jammed or cut by the Russians. Isolated from his own side, and outnumbered and outgunned by Russian troops outside, the commander struck a deal with the head of a Russian special forces unit.

Pro-Russian civilians were allowed to force the base’s gate without reprisals. The Ukrainians “supposedly could not do anything; you cannot shoot civilians”, the member of the unit said on condition of anonymity because he is still living in Crimea and feared repercussions.

Russian troops then followed the civilians in, taking over the base and offering the unit a chance to switch allegiance to Russia. About half agreed, although the base’s chief refused and was allowed to leave Crimea.

“The commander did not resist,” said the unit member. “On the other hand, he did what he could under the circumstances.”

Two other people involved in the annexation – a former Ukrainian serviceman now on a Russian base in Crimea, and a source close to the Russian military who was there at the time – also described witnessing similar faked confrontations.

“You have to understand that the seizure of Ukrainian military units in Crimea was just a show,” said the source close to the Russian military. 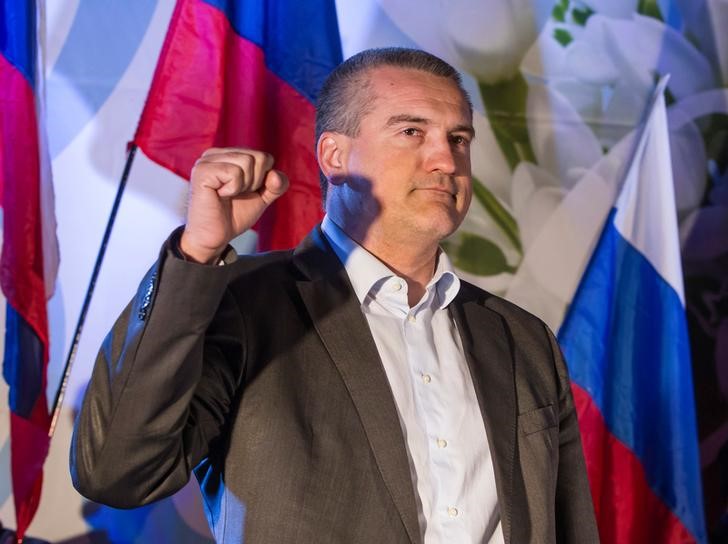 Officials also point out that Russian speakers were among the seven members of Latvia’s forces to die during international deployments to Afghanistan and Iraq.

Nevertheless, lessons have been learned from Crimea. “We learned, of course, that there was not only the issue of loyalty, but also false orders were submitted and there was a blockage of communication during the Crimea operation,” said Janis Garisons, State Secretary in the Latvian defence ministry.

Latvia has changed the law so that unit commanders are obliged to resist by default. But Garisons said the simplest step was taken long before the annexation, with the introduction in 2008 of vetting by the security services for “everybody who joins the armed forces, from private to general”.