Labour party MP Tanmanjeet Singh Dhesi has announced that a letter addressed to Johnson was being drafted and will be signed by MPs from various parties. 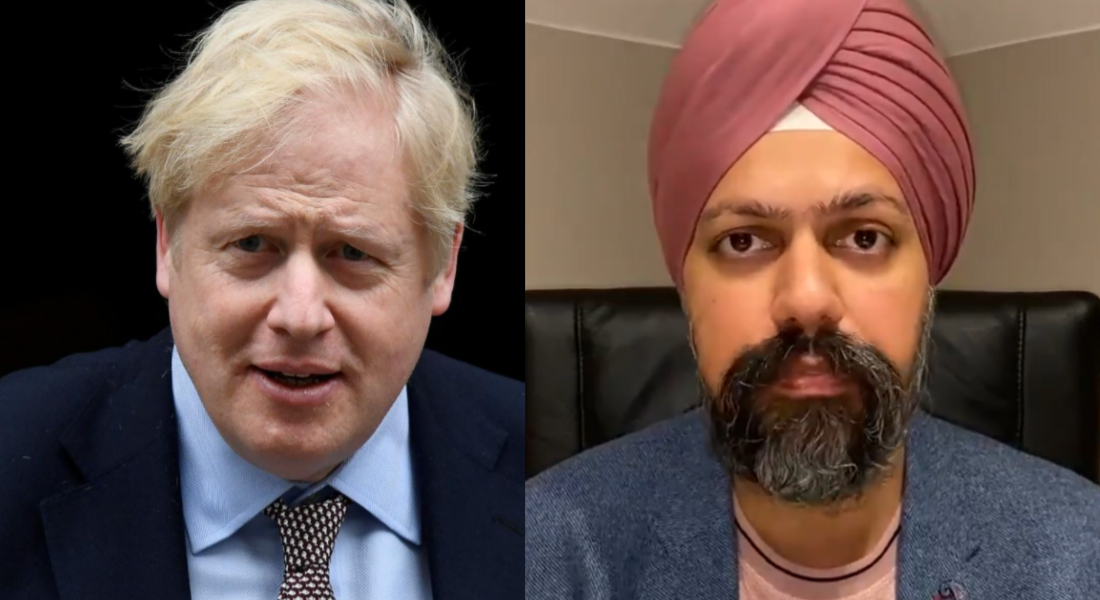 New Delhi: Even as preparations are underway for United Kingdom Prime Minister Boris Johnson’s India visit next month, a letter is being drafted by a group of British members of parliament to ask Johnson to convey concerns on the issue of the farmers’ protests to his Indian host.

Since November 26, thousands of farmers from Punjab, Haryana and several other states have been protesting at various borders of Delhi, seeking a repeal of the three farm laws enacted in September.

In a video posted on his Twitter account on Thursday, Labour MP from Slough, Tanmanjeet Singh Dhesi announced that a letter addressed to Johnson was being drafted and will be signed by MPs from various parties.

Given agreement and protocols for Boris Johnson’s January India trip are finalised, he’ll soon receive cross-party MPs letter, asking him to clarify his understanding of the India #FarmersProtest and to raise with the Indian PM hopes of a speedy resolution to this huge issue. 1/2 pic.twitter.com/8G2vq4h5IV

Dhesi had previously raised the issue of the farmers’ protests in the UK parliament during the weekly prime minister’s questions (PMQs) session on December 9. But, Johnson had inexplicably replied by talking about India-Pakistan dispute, which baffled observers. The UK high commission had later stated that the PM had “misheard” the question.

Even earlier, Dhesi had initiated a letter from 36 MPs to the UK foreign secretary Dominic Raab asking him to raise the matter during his visit.

When Raab travelled to Delhi, he told reporters that the issue of the farmers’ protests had been discussed during his talks with Indian external affairs minister S. Jaishankar.

While he noted the issue of farm laws was domestic, Raab argued that it could not be considered just an internal issue due to the large Indian diaspora in the UK who are following the protests closely.

Also read: Farmers Protest: Why Are Some ‘Liberals’ Invoking the Legacy of Margaret Thatcher?

“Of course, they (farm laws)  have elicited the protests that you refer to, and your politics – in some sense – because of the Indian diaspora in Britain, is our politics. But I think, India, as well as having a market-driven economy also has a vibrant heritage of peaceful protests and vigorous debate, and we watch that with interest and we respect it,” UK foreign secretary said on December 16.

In his latest statement, Dhesi thanked the UK foreign secretary for having raised the issue during his trip to Delhi.

However, Johnson’s non-reply in parliament seems to have irked the UK MP. “Unfortunately, PM did not quite understand the question (in parliament). Therefore, I have drafted a letter to be sent to Johnson because we have learnt that preparations have been made for his trip to India in January”.

The letter will ask the UK PM to convey “our heartfelt anxieties and those of our constituents to the Indian Prime Minister as well as hoping for a speedy resolution to the deadlock,” Dhesi noted.

He added that the Indian side should also be made aware of “the point that everybody must have a fundamental right to peaceful protest in their struggle to seek justice”.

The Labour MP called on UK citizens who are interested in the issue to contact their representatives to sign the letter. He also sent a message to the protesting farmers that “many people are concerned about your safety and well-being” and expressed hope that they will be back in their homes after a solution is found at the earliest.

Earlier this week, farmer protest leaders in India had also stated that they will be sending emails to Punjabi-origin MPs to exert pressure on Johnson to cancel his scheduled visit to India to be chief guest for Republic Day celebrations.

“The UK prime minister is scheduled to visit India on January 26. We are writing to British MPs asking them to stop him from visiting India till the time farmers’ demands are not met by the Indian government,” farmers’ leader Kulwant Singh Sandhu has been quoted as saying by ANI.

So far, Johnson’s trip is on schedule, despite the identification of a new variant of COVID-19 in the UK. On Monday, India had joined several countries in putting a temporary ban on flights from UK till December 31.

There has been no official reaction from the Indian side to Raab’s remarks on the farmers’ protest being raised in official talks.

However, when the Canadian Prime Minister Justin Trudeau had expressed support for the right to peaceful protests by Indian farmers, the ministry of external affairs had summoned the Canadian envoy to lodge a strong protest. India had previously described the remarks by Trudeau and other Canadian politicians as “ill-informed”, “unwarranted” and an “unpalatable interference” in India’s internal affairs.