Dispatched by President Donald Trump to Ethiopia, South Sudan and Democratic Republic of Congo, Haley's trip was one of the first tangible signs of interest in Africa by the nine-month old administration. 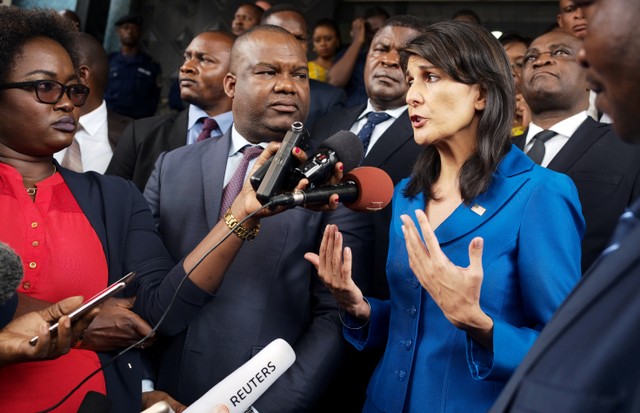 Juba, South Sudan/Kitchanga, Democratic Republic of Congo: In a mountainous camp for displaced Congolese, US Ambassador to the UN Nikki Haley wrapped her arm around an inconsolable woman who recounted being raped twice.

“It only makes me more passionate, it makes me more determined,” Haley told a small group of reporters traveling with her during her first trip to Africa. “I’ll carry the voices of the women that I met and things that they said.”

Dispatched by President Donald Trump to Ethiopia, South Sudan and Democratic Republic of Congo, Haley‘s trip was one of the first tangible signs of interest in Africa by the nine-month old administration.

Her challenge: how to show the US is actively engaged in Africa, where humanitarian and political crises are often overshadowed by more urgent conflicts elsewhere and at the same time honor Trump’s avowed “America First” policy which puts US economic and national interests ahead of international commitments.

As Africa struggles to win Trump’s interest, US policy is more likely to be increasingly focused on countering militant threats. Washington also has a financial interest at stake as it tries to cut UN peacekeeping costs, for which it pays more than a quarter.

Trump has made a point of saying he would not impose US values on others, raising concerns among activists that human rights issues could take a backseat. 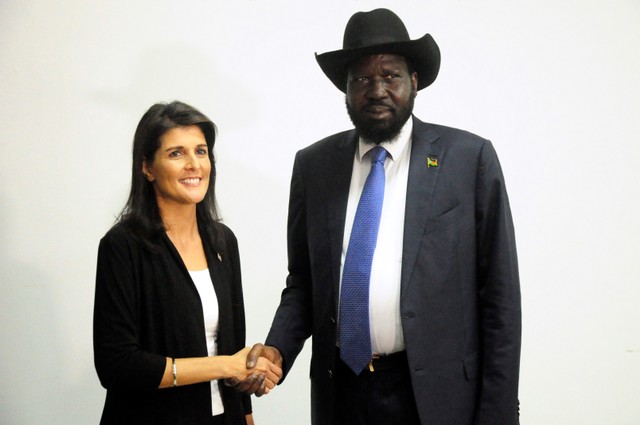 Nowhere is that more in focus than in Niger where a deadly ambush killed four US troops who were there to assist local Nigerian forces fighting a local Islamic State affiliate this month. At the same time, Washington has mostly turned a blind eye to the increasingly authoritarian moves of Niger’s former opposition leader, now president Mahamadou Issoufou, as it tries to stop the militant threat from expanding.

Haley, a former governor of the US state of South Carolina, was the most senior member of Trump’s administration to travel to the three sub-Saharan states in a trip that showed how she balances her political skills with her nascent foreign policy and diplomacy experience.

She was moved to tears after visiting displaced Congolese in Kitchanga in the conflict-ravaged east of the country. In Ethiopia’s Gambella region, she kicked off her shoes and sat down on the floor to play with South Sudanese toddlers.

With US Secretary of State Rex Tillerson shying away from the spotlight, Haley has carved out a high-profile role for herself. Amid speculation about Tillerson’s future Haley said that if she was offered the job: “I would say no.”

Known for taking a blunt approach that has raised eyebrows among diplomats at the UN. Haley took her direct style to lengthy one-on-one conversations with the South Sudanese and Congolese leaders.

“I think bluntness is important, but I also expected it back and I got candid conversations back from them,” she said. “That was very much appreciated because we didn’t want to have to sit there and deal with the political talk, we wanted to get to the realities of the situation.”

It’s not clear yet if South Sudanese and Congolese leaders will heed her message.

In Kinshasa she spoke privately with President Joseph Kabila for 90 minutes. She had said Kinshasa must hold a long-delayed election to replace Kabila by the end of next year or the vote will lose international support.

But the Congolese opposition was critical of her statement there because it conceded there would be no election this year, in violation of a deal Kabila’s camp signed with the opposition last December, without extracting any concessions in return.

“Calling for Kabila to stay in power beyond Dec. 31, 2017 is the equivalent, pure and simple, of making oneself complicit with the evil genius!” opposition leader Olivier Kamitatu wrote on Twitter above a photo of Haley from her visit.

In Juba, Haley met with President Salva Kiir for 45 minutes, showing him photos of refugees from her visit to Gambella.

South Sudan spiraled into a civil war in 2013, just two years after gaining independence from Sudan, sparked by a feud between Kiir, an ethnic Dinka, and his former deputy Riek Machar, a Nuer.

The US invested heavily in the process that led to South Sudan’s independence. The Trump administration has been far less engaged, let alone influential, in trying to end the war that erupted.

“I’ll give options and then if asked I’ll give the recommendation,” Haley said. “(Trump) very much wants to know how everybody else feels, he very much takes all that into consideration and then he makes his decision.”