Protesters say there has been an increasing number of verbal and physical attacks against women for their choice of clothing. 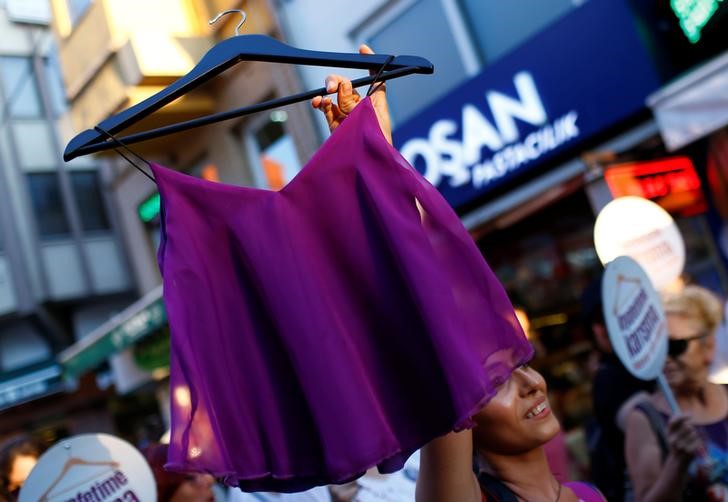 A women rights activist holds up a piece of clothing during a protest against what they say are violence and animosity they face from men demanding they dress more conservatively, in Istanbul, Turkey, July 29, 2017. Credit: Reuters/Murad Sezer

Istanbul: Hundreds of Turkish women marched in the country’s biggest city Istanbul on Saturday to protest against the violence and animosity they face from men demanding they dress more conservatively.

The march, dubbed “Don’t Mess With My Outfit”, started in the Kadikoy district on the Asian side of the city. Women chanted slogans and carried denim shorts on hangers as examples of the type of clothing some men say they find unacceptable.

“We will not obey, be silenced, be afraid. We will win through resistance,” the crowds chanted, holding up posters and LGBT rainbow flags.

Istanbul has long been seen as a relatively liberal city for women and gay people.

But critics say President Tayyip Erdogan and his Islamist-rooted AK Party have shown little interest in expanding rights for minorities, gay people and women, and are intolerant of dissent.

Protesters say there has been an increasing number of verbal and physical attacks against women for their choice of clothing.

In one incident in June, a young woman, Asena Melisa Saglam, was attacked by a man on a bus in Istanbul for wearing shorts during the Muslim holy month of Ramadan. Video of the incident showed the man hitting her while the bus driver watched.

“Are you not ashamed of dressing like this during Ramadan?” the footage showed the man saying.

In another incident, Canan Kaymakci, was harassed on the street in Istanbul when a man accused her of wearing provocative clothing, saying she should be careful because she was “turning people on.”

Another woman, Aysegul Terzi, was called a devil and kicked by a man on a public bus, also for wearing shorts. Footage showed the man telling her that those who wear shorts “should die.”

Saturday’s march was joined by several members of the gay and transgender community, after Istanbul‘s pride march was banned by authorities late in June.

Since Erdogan took office nearly 15 years ago, restrictions on wearing the headscarf imposed by Turkey’s secular 20th century leaders have been eased and more women in the mainly Muslim country have chosen to wear it.

Saturday’s march saw several women protesting against the criticism they have faced for choosing to wear headscarves.