Peace With Kurds in Ruins on Both Sides of Turkish Border 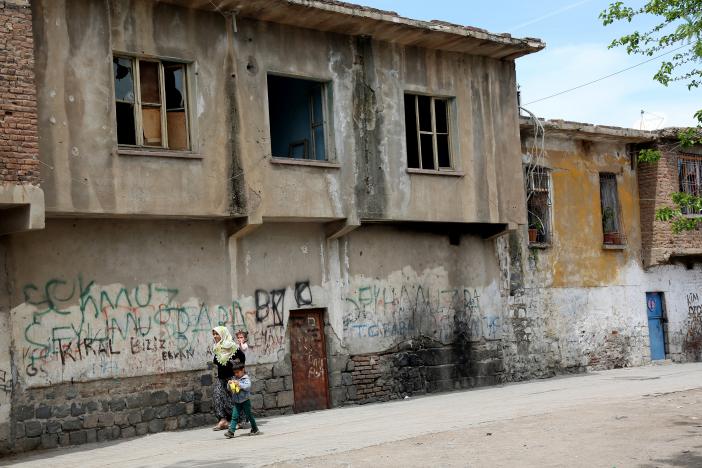 Residents walk past by an empty building in Sur neighborhood which was partly damaged during the security operations and clashes between Turkish security forces and Kurdish militants, in Diyarbakir, Turkey, May 1, 2017. REUTERS/Sertac Kayar

Sirnak, Turkey: The rise of a Kurdish militia in Syria over the course of the Syrian civil war has expanded Turkey’s 30-year Kurdish conflict beyond its frontiers and, to some degree, beyond its control. In few places is this as evident as in Sirnak.

Months of fighting last year between Turkish forces and the Kurdistan Workers Party (PKK) destroyed large parts of this and other border towns, leaving a historic peace process in tatters.

Parts of the town, which is surrounded by a mountain range stretching towards the border with Syria, lie in ruins. While the guns are now silent, residents have to carry their groceries home over piles of rubble and past half-destroyed buildings.

The intensity of fighting marked a shift in the regional power balance that could hamper any return to peace talks. Turkey has launched strikes against the Syrian militia which, to Ankara’s dismay, has gained influence as Washington’s chief ally in combating ISIS.

But Ankara’s approach to the Syrian Kurds has consequences in Sirnak and other cities in Turkey’s mainly Kurdish southeast.

Hayrettin Eroglu, 37, a shopkeeper in nearby Cizre, which saw some of the worst of the fighting after a ceasefire in Turkey collapsed in 2015, dates a change in mood to 2014 when he says Turkey failed to support Kurds under siege from ISIS in the Syrian border town of Kobani.

“(President Tayyip Erdogan) sat down with Kurds to make peace but then he said those things – ‘Kobani is about to fall’ – like he almost enjoyed it’,” he said. “All the Kurds here, in Suruc, in Urfa (in Turkey), they all have relatives in Kobani, in Tel Abyad (in Syria).

“There are people whose cousins, grandchildren went to Syria, fought alongside the YPG against Islamic State. And then Erdogan says that. That was definitely a milestone. But on the other hand his stance also united Kurds,” he added.

Erdogan is due to meet US President Donald Trump this week. Throughout Syria’s civil war, Ankara’s priority has remained toppling President Bashar al-Assad, while Washington’s main focus has been to defeat Islamic State.

When, in an about-turn in July 2015, Turkey granted the U.S.-led coalition against ISIS access to its southern air bases and launched air strikes on Islamic State itself, it faced criticism – mainly from the West and Kurds – that it was too little, too late.

In the battle to recapture Kobani, a US-led coalition dropped bombs in support of YPG militia fighters. When Kurds retook Kobani after five months of street battles, it boosted their military standing in the eyes of Washington, and compounded Ankara’s problems.

The collapse of a 2-1/2 year ceasefire with the Kurdistan Workers Party (PKK) in July 2015 unleashed the worst fighting in decades in Turkey’s predominantly Kurdish southeast. Dozens of neighbourhoods were engulfed in clashes between security forces and young PKK militants digging trenches, setting barricades, laying bombs and declaring self-rule in Turkish towns.

It was the end of a peace process that had brought glimmers of economic recovery to the region after 30 years of conflict and the deaths of more than 40,000 people.

Seyhmus Baday, a soap maker trading in the old town of Mardin, which was largely spared the fighting, recalls remaining hopeful despite news of clashes on TV every night.

“Digging those trenches just finished us all,” Baday said as he sat among large piles of soap in his shop. “After Kobani, business went south. Trenches wiped out remaining customers. Then the state responded so strongly. Here we are, sitting here all day, answering phones.”

Abroad, Ankara has always made clear it will not tolerate any autonomous Syrian Kurdish enclave along its borders and sent troops in earlier this year with the aim of stopping any advance by the YPG west of the Euphrates river.

“Both the PKK and YPG are terrorist organisations and they are no different apart from their names,” foreign minister Mevlut Cavusoglu said in response to Trump’s decision to arm the YPG to help a campaign to recapture the ISIS-held city of Raqqa in Syria.

President Erdogan criticised the decision but said he was confident he could reverse it during his Washington visit.

Ankara ultimately fears the creation of an independent Kurdish state occupying Turkish and Syrian, perhaps Iraqi, territory. In this, it seeks support from Washington which has long considered the PKK a terrorist organisation.

“We want to believe that our allies will prefer to side with us, not with a terrorist organisation,” President Erdogan said in Ankara, speaking of the YPG.

Better days, he said, lay ahead.

But in Sirnak, one of the most severely damaged towns and a province that voted overwhelmingly against increased powers, his comments were met with little enthusiasm. Many residents said they feared a worsening security crackdown while some voiced anger at Turkey’s stance towards Kurds in neighbouring Syria.

“Peace has become an illusion around here,” miner Ali Ucer said at a restaurant metres away from a heavily guarded police checkpoint. “Erdogan launched the peace process and then he himself ended it when it no longer fit his politics.”

“Why start over now when he has all the power he needs?” said Ucer, a former Erdogan supporter who says he has now turned against him over his policy on Syria’s Kurds.

“As good as it gets”

Struggling to pay the rent and feed his children, soap maker Baday voted in favour of granting President Erdogan greater powers. He believes there are many others who think like him.

“In the end, the state is the mighty one and can put an end to this. It can build factories and if there is employment, those boys may stop going up to the mountains,” he said, referring to youths joining the ranks of the PKK.

“Some Kurds like me may have given Erdogan a final chance.”

The towns of Sirnak and Cizre retain a heavy police presence. Entry and exit is through security checkpoints guarded with armoured police vehicles and gun emplacements, with sandbags and concrete blocks shielding against any attack.

Veteran village guard Mehmet sits in a stuffy tea shop in Cizre, gazing at the bustling shopping street with cars honking horns. He recalls a year earlier when the shops were all shut and the sole sound was gunfire.

Mehmet, who has fought the PKK alongside the Turkish army in the mountainous countryside near Cizre for the past 23 years, voted for President Erdogan last month but even for him, peace is just a word.

“We need new talks, a new process but now there are far more players than Turkey and the Kurds. There is the United States now and Russia and international players. The question is: Will they allow us to make peace?”