'You are a terrific guy. You are doing amazing work which is visible in every way. I am looking forward to see you soon,' Trump told Nawaz Sharif. 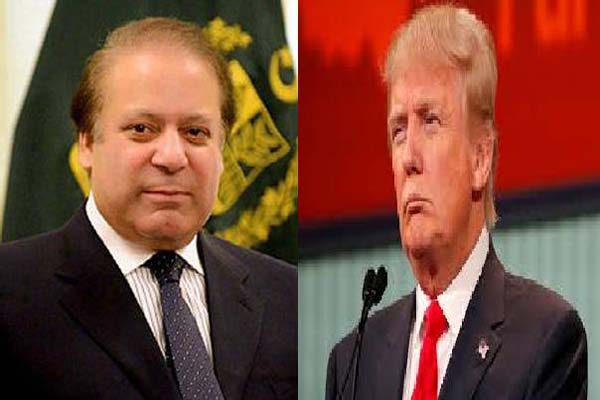 New Delhi: US president-elect Donald Trump has told Prime Minister Nawaz Sharif of Pakistan that he is “ready and willing to play any role you want me to play to address and find solutions to the outstanding problems”, according to a press release issued by the press information department (PID) of the Pakistani government. While Pakistan welcomed the ‘offer’, India said that Washington’s ‘dialogue’ with Pakistan on “outstanding problems” should be limited to discouraging Islamabad’s support for terrorism.

Though official accounts of conversations between world leaders tend to be drab, dull and parsimonious, the PID has for a change provided a rather colourful statement about the phone call, using what appears to be verbatim quotes in order to provide a flavour of the conversation.

Trump began by saying that Nawaz Sharif had a “very good reputation”. “You are a terrific guy. You are doing amazing work which is visible in every way. I am looking forward to see you soon. As I am talking to you Prime Minister, I feel I am talking to a person I have known for long,” said the PID press note, quoting the next US president.

For the Indian government, the operative line which would certainly lead to some search for transcripts and explanations was about Trump seemingly offering to be a mediator.

“I am ready and willing to play any role that you want me to play to address and find solutions to the outstanding problems,” said the communique.

While the press release does not explicitly define the “outstanding problems”, the Pakistan government is currently in the middle of a diplomatic campaign to highlight Indian ‘atrocities’ in Kashmir, with the two neighbours going through a unusually frosty patch in their relationship.

India has always ruled out any third-party intervention in thawing India-Pakistan relations, especially on the Kashmir dispute. Just a week ago, Indian foreign secretary S. Jaishankar had described the Indian “allergy” to any outsider involvement as being a consequence of past history.

The rest of the conversation between Sharif and Trump consisted of compliments from the US president-elect, as per the press release. “Your country is amazing, with tremendous opportunities. Pakistanis are one of the most intelligent people”.

Sharif invited Trump to Pakistan, which he readily accepted, saying that “he would love to come to a fantastic country, fantastic place of fantastic people”.

Trump also asked the Pakistani prime minister to convey to the Pakistani people “that they are amazing and all Pakistanis I have known are exceptional people”.

As a sign of their new friendship, Trump even told Sharif to “feel free to call me any time even before 20th January that is before I assume my office.”

While the press release was uploaded by Pakistan government’s official information wing, the Prime Minister’s website listed no communiques about the phone call.  The only mention of Trump on Sharif’s website was the congratulatory letter from the Pakistan Prime Minister on Nov 9.

‘I am ready to address, find solutions to outstanding problems’: Trump tells Nawaz https://t.co/cDGbOvegaV via @Associate Press Of Pakistan

Later, the Trump transition team released their own version of the conversation, which was a pared-down, bland read-out, with no mention of the US president-elect’s offer to bring peace between the South Asian countries.

“President-elect Trump and the Prime Minister of Pakistan Muhammad Nawaz Sharif spoke today and had a productive conversation about how the United States and Pakistan will have a strong working relationship in the future… President-elect Trump also noted that he is looking forward to a lasting and strong personal relationship with Prime Minister Sharif,” said the statement.

Islamabad was, nevertheless, quick of the mark to accept Trump’s ‘offer’. “Pakistan welcomes Mr. Trump’s willingness to play a role in resolving the outstanding issues between Pakistan and India, including the core issue of Jammu & Kashmir,” said Pakistan foreign office spokesperson Nafees Zakaria.

In India, MEA spokesperson Vikas Swarup said that India had noted the ‘fantastic’ conversation. He pointed out that the Pakistan’s version was largely “one-sided” and that Trump transition team had issued a statement in the form of a “rejoinder”.

Even as he expressed scepticism, Swarup noted that Trump was quoted as saying that he was willing “to resolve all outstanding issues of Pakistan”.

“We believe that the most outstanding issue of the outstanding issues is Pakistan’s continued support to cross-border terrorism. To that extent, we will welcome a dialogue between the US and Pakistan to resolve that issue,” he said.

Sharif was perhaps, one of the last major world leaders to be able to speak to Trump after the Republican leader’s election.

On November 14, Express Tribune reported that the Pakistani government was reaching out to Trump through a Pakistani-American, Sajid Tarar, who had been one of the few visible Muslim supporters of the real estate tycoon.

Prime Minister Narendra Modi had been one of the first foreign leaders to speak to Trump on November 9. However, it was announced rather less vividly and with much less detail by the official spokesperson on Twitter.

PM conveyed his best wishes & the two leaders looked forward to working closely to take the #IndiaUS strategic partnership to a new height.

As per a CNN report, the US president-elect has been a bit unorthodox in his first contacts with world leaders. While the state department usually gives briefings to newly elected leaders, Trump’s team only turned for help after he had spoken to over a dozen foreign leaders.

While Trump had tweeted critically about Pakistan in previous years, he had not made much mention about the South Asian country during his campaign. He did, however, express willingness to be a mediator between India and Pakistan in an interview ahead of a campaign event to address Indian-Americans. “I think if they wanted me to, I would love to be the mediator or arbitrator,” Trump told the Hindustan Times in October.

Here are a selection of his tweets on Pakistan:

Another radical Islamic attack, this time in Pakistan, targeting Christian women & children. At least 67 dead,400 injured. I alone can solve

Do you think John Kerry is aware of the fact that they are building nuclear weapons in Iran and North Korea and Pakistan already has them!!

When will Pakistan apologize to us for providing safe sanctuary to Osama Bin Laden for 6 years?! Some "ally."

“Get it straight: Pakistan is not our friend. We’ve given them billions and billions of dollars, and what (cont) http://t.co/O5S4cQV3

Get it straight: Pakistan is not our friend. When our tremendous Navy SEALS took out Osama bin Laden, they did… (cont) http://t.co/s6u5o8Co