Tokyo Heads to Polls in Troubling Vote for Prime Minister

Japan voters cast ballots on Sunday in election that could spell trouble for Prime Minister Shinzo Abe, suffering from a scandal over suspected favouritism. 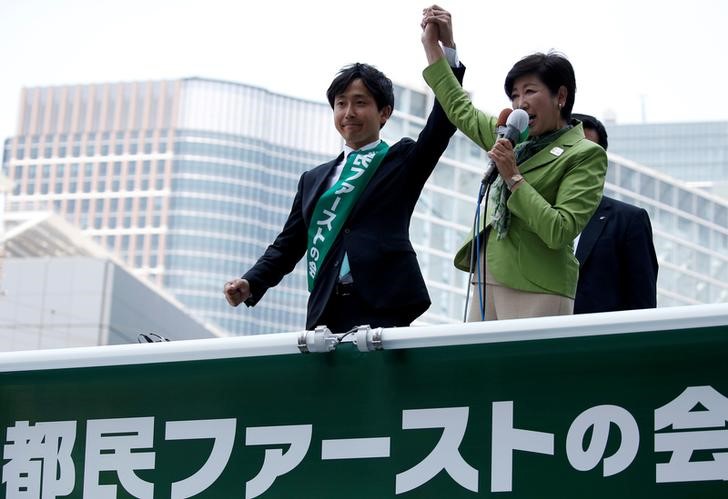 Tokyo Governor and head of Tokyo Citizens First party Yuriko Koike (R) delivers a speech to voters atop of a campaign van as election campaign officially kicks off for Tokyo Metropolitan Assembly election, on the street in Tokyo June 23, 2017. Credit: Reuters/Issei Kato

Tokyo: Voters in the Japanese capital cast ballots on Sunday in an election that could spell trouble for Prime Minister Shinzo Abe, who is suffering from slumping support because of a scandal over suspected favouritism for a friend doing business.

On the surface, the Tokyo Metropolitan assembly election is a referendum on Governor Yuriko Koike’s year in office, but a poor showing for Abe’s Liberal Democratic Party (LDP) will also be taken as rebuke of his 4-1/2-year-old administration.

Past Tokyo elections have been bellwethers to national trends. A 2009 Tokyo poll in which the LDP won just 38 seats was followed by its defeat in a general election that year, although this time no lower house poll need be held until late 2018.

Koike, a media-savvy ex-defence minister and former LDP member pushing a reformist message, hopes her Tokyo Citizens First party and allies win a majority in the 127-member assembly, to end the LDP’s domination of the chamber.

Among her allies is the Komeito party, the LDP’s national coalition partner.

A strong showing by Koike’s party would fuel speculation that she will make a bid for the nation’s top job, though probably not until after the 2020 Tokyo Olympics.

It could also widen cracks between the LDP and the Komeito while damaging prospects for the opposition Democratic Party.

Abe’s rivals in his party could be encouraged by a dismal LDP performance to challenge him in a leadership race in September 2018, victory in which would set Abe on course to become Japan’s longest-serving leader and bolster his hopes of revising the post-war, pacifist constitution.

Gerry Curtis, professor emeritus at Columbia University, said Japan’s political landscape could be set for a shake-up if Koike’s party and its allies win big.

“We may discover that Japan is not all that different from Britain, France, and the U.S. in its ability to produce a big political surprise,” he said, referring to recent elections in those countries.

Abe’s troubles centre on concern he may have intervened to help Kake Gakuen (Kake Educational Institution), whose director, Kotaro Kake, is a friend, win approval for a veterinary school in a special economic zone.

The government has not granted such an approval in decades due to perceived glut of veterinarians. Abe and his aides have denied doing Kake any favours.

Potentially more troublesome is the impression among many voters that Abe and his inner circle have grown arrogant.

A survey last week by the Jiji news agency forecast Koike’s party and allied groups would win at least 64 seats.