Theresa May and Jeremy Corbyn Set out Opposing Stance on Brexit

While May said she would walk away from Brexit without a deal if she had to, Labour rival Jeremy Corbyn said he would make sure an agreement was reached if he won power. 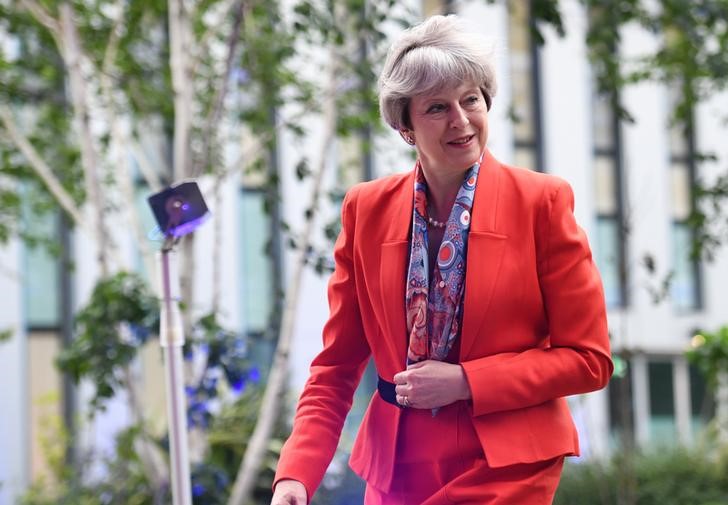 London: British Prime Minister Theresa May said she would walk away from divorce talks with the European Union without a deal if she had to, but her rival in next week’s election, Labour’s Jeremy Corbyn, said he would make sure an agreement was reached if he won power.

Britons will go to the polls in a vote that will decide whether May, from the centre-right Conservatives or Corbyn of the leftist Labour Party, gets to sit down with Brussels and hammer out an exit deal that will define the country’s trade and diplomatic ties with the EU.

Their differing stances could set the tone for what both Britain and the EU expect will be two years of difficult talks on everything from how much cash should be paid upon exit, to border arrangements for migrants, goods and services.

May is expected to win comfortably on June 8, but her party’s lead in opinion polls has narrowed sharply in the last week, calling into question her decision to call the unscheduled election seeking a strong endorsement of her Brexit strategy.

One poll published on Tuesday showed her lead had been cut to 6 percentage points from 9 points a week ago and 18 points two weeks ago as voters reacted badly to the Conservatives’ manifesto.

The two party leaders’ differences on how to handle talks with Brussels came to the fore on Monday during the main televised event of the campaign, in which they separately fielded questions from the public and were then interviewed.

“We will be there to negotiate the right deal but what I have said is that no deal is better than a bad deal. We have to be prepared to walk out,” she said to applause during the Sky News interview.

May had previously expressed her willingness to walk away from talks, warning that Brussels could seek to punish Britain to deter other EU states from leaving by taking a hardline stance.

But, Corbyn set out a different approach.

When asked whether he would contemplate a scenario where Britain failed to strike an arrangement with the rest of the bloc, Jeremy Corbyn said: “There’s going to be a deal.”

“We will make sure there is a deal.”

With polls showing May is more trusted to deliver Brexit than Corbyn, she will look to keep the election debate tightly focused on the upcoming talks, seeking to recover from a backlash to her plans to make elderly voters pay more towards the cost of their old age care.

At a campaign event on Tuesday she is expected to warn that the EU has taken an aggressive stance to the negotiations, and that she needs the strong endorsement of the British public to fight for a good exit deal.

May was heckled and laughed at by some members of the audience at Monday’s TV appearance when discussing her education policy, and when interviewer Jeremy Paxman asked whether the EU would see her as a “blowhard who collapses at the first sign of gunfire” after she softened her plans on old age care.

“What the people in Brussels look at is the record I had negotiating with them … and delivering for this country on a number of issues on justice and home affairs which people said we were never going to get,” May replied, citing her record as interior minister between 2010 and 2016.