The Unprecedented Promises – and Threats – of the Belt and Road Initiative

The initiative's success ultimately depends on what regional players get from it in terms of economic, political and security benefits. 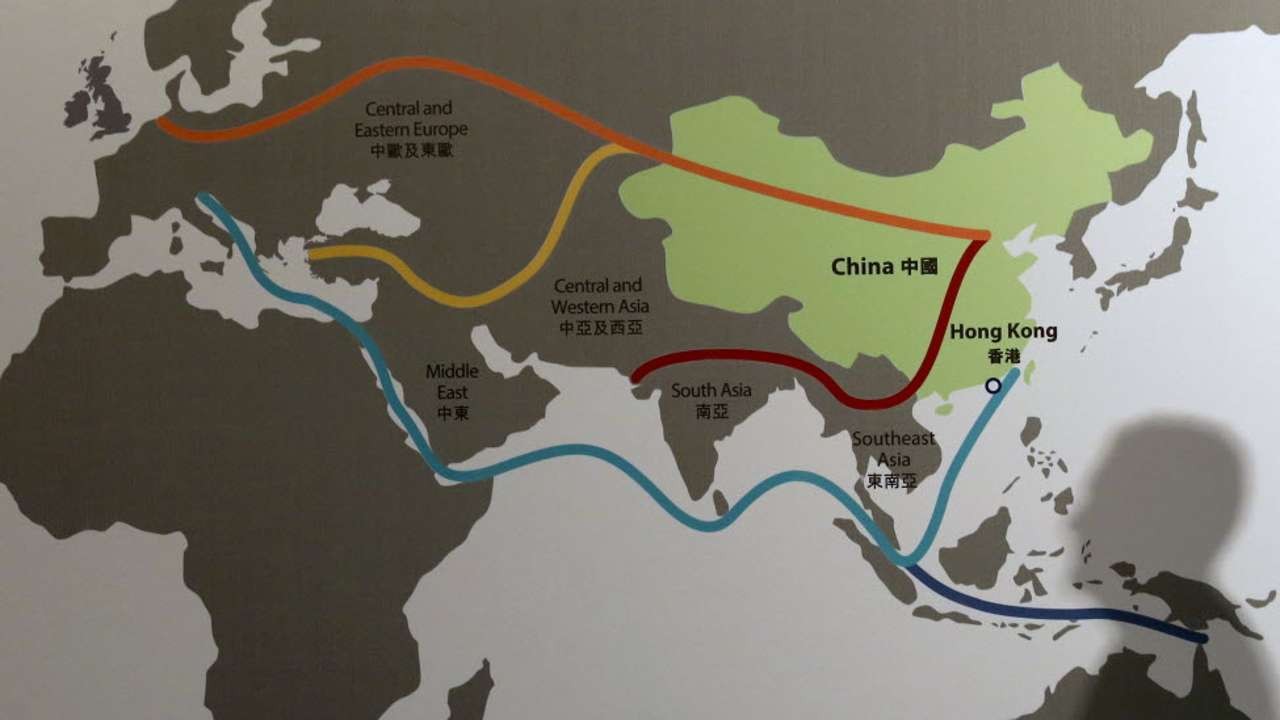 A 2016 graphic of the One Belt, One Road project as the Belt and Road Initiative was previously known. Credit: Reuters

It has been evident since its unveiling (initially as One Belt, One Road or OBOR) in 2013 that the Belt and Road Initiative (BRI) is an ambitious attempt to unify and build a web of connectivity linked to China on a scale that has not been seen before. We have just heard in detail what is envisaged. By its biggest definition it will directly involve 65 countries, 4.4 billion people and 29% of global GDP ($2.1 trillion). It will be backed by the New Silk Road Fund of $40 billion, the China Development Bank’s $900 billion and the bulk of the Asian Infrastructure Investment Bank’s (AIIB) $100 billion. The Economist estimates that over $1 trillion of “government money” will be involved in building the BRI.

The economic logic of connectivity on a trans-continental scale envisaged by the BRI is strong, particularly at a time when globalisation appears to be in retreat in the face of rising protectionism and economic nationalism in the US and the West. The slow and patchy recovery of the global economy from the 2008 crisis and its diminished prospects mean that the world needs new impetuses to growth. The BRI could certainly be one. We in India have pointed out for some time that there is an infrastructure gap in Asia that needs to be filled. The Asian Development Bank estimates that Asia requires an investment of about $1.7 trillion in infrastructure. The connectivity proposed to be built in BRI is also clearly of benefit to all those exporting countries in Asia who seek better access to markets and supplies. There are continental and maritime connectivity gaps across Eurasia that need to be filled.

There are also evident economic advantages for the Chinese economy, the world’s largest exporter, in addressing domestic economic imbalances and industrial over-capacity (in manufacturing and construction), and in channeling excess savings and large foreign exchange reserves, particularly as domestic growth slows and the demographic dividend tapers off. The BRI will also seek to set standards across countries and markets which are coordinated with China’s.

The economic benefits for others from economically viable projects under the BRI would flow from the fact that infrastructure projects provide public goods. To the extent that non-Chinese firms can compete and participate in creating local and regional production networks they would benefit from the BRI. If, however, there is an attempt to push a political agenda, excluding economic rivals, or pursuing political or security goals, the economic benefits to others will be limited. I would expect that actual practice will be somewhere between these extremes, where there will certainly be benefit to China and Chinese companies but also some advantage for their local partners.

Nothing on this scale has been seen before.

Not quite the Marshall Plan

The Marshall Plan is often mentioned as a precedent for what is being attempted in the BRI. In fact, the BRI is about development not reconstruction, unlike the Marshall Plan. The more significant difference is that the Marshall Plan had limited geographical scope. It was conceived and executed in the very specific political context of the US’s ideological and geopolitical competition with the Soviet Union in post-war Europe.

In economic terms, the closest parallel is probably Japan’s export of capital, manufacturing and technology in the eighties and early nineties. At that time, a Japan with a very high savings rate, large current account surplus, an appreciating currency and slowing domestic growth pioneered vertically integrated regional production networks, first with South Korea, Taiwan and south-east Asian countries and then with China. Much the same economic phenomenon is likely to occur this time with the BRI, with China’s relative attractiveness as a source of funding and export market resulting in production integration. To my mind, it remains to be seen how far production integration will proceed when China herself, like the US, is on-shoring production lines and moving up the value chain in several globally integrated production networks. Global production chains have been shortening since 2008. It also remains to be seen how this will fit into China’s attempted shift to domestic demand and consumption-led growth. Presumably, that outcome will be largely determined by economic factors.

Of course, there are significant differences between what Japan did in the eighties and early nineties and what China is now attempting. Unlike Japan in the eighties and early nineties, China is a large political actor, is not dependent on the US for her security, and has the potential to be her global rival across all forms of power, not just economic. Japan in the eighties was a uni-dimensional actor offering economic benefits; today China can offer a full range of benefits to her BRI partners, including political and security aspects. Her limitations are a relative lack of technology of her own and weaker soft power.

Not all projects under the BRI seem economically viable, which suggests that they have been included for geo-political or other reasons. The China-Pakistan Economic Corridor (CPEC), for instance, lacks economic justification, and it is its strategic portions – like the port – that have been implemented first. The CPEC is to traverse some of the most lawless and insecure parts of the world. For India there is the added complication that it goes through Indian territory under Pakistani occupation, and by making a long term investment on that basis, seems to solidify and legitimise that occupation.

Indeed, this raises the larger issue that much of the planned BRI infrastructure is in regions and countries where security is weak and politics unstable, and, therefore, the risks to large scale investment are considerable. Whether the promise of billions of dollars of investment and the reordering of production networks on a regional basis will help to stabilise these areas is moot, unless we also address issues of security for investments, projects and infrastructure.

In effect, we are considering here a plan of unprecedented scale and ambition with much more than economic ramifications. And we are doing so when the strategic landscape is being redrawn around us by the actions not just of China but by the US and a series of other powers. The Eurasian landmass is being consolidated, and a new maritime order is being negotiated and contended for in the seas near China, with some spillover into the western Pacific and the Indian Ocean. China herself has moved in the last decade from Deng’s 24-character strategy of keeping her head down and not taking leadership, to offering to perform the role of a responsible power, and now to offering “Chinese solutions” to geopolitical issues and problems. China, like India, is one of the most outspoken advocates of globalisation and multilateralism.

It is the logic of strategy that an initiative that is seen as primarily geopolitical in intent will meet countervailing forces and resistance. Doubts about the BRI would be eased, and its implementation would be smoother, if the states of the region were to feel more confident about the security situation and the fraught geopolitical context within which the BRI initiative is being undertaken. Security issues include maritime security and security of sea-lanes, which have a direct bearing on the Maritime Silk Road, and also the regional security architecture. It is important to bear in mind that the BRI is unique in its ambition and its geopolitical implications – which should also be addressed.

India’s attitude to the BRI

While clarifying some of the aspects mentioned earlier, and making clear that sovereignty aspects of the CPEC as presently proposed are unacceptable, we might explore which portions of the public goods that the BRI creates – whether infrastructure or connectivity – serve India’s interest in improving connectivity and economic integration with the Asian and global economy. To that extent, the BRI represents an opportunity for India. Besides, even if only some portion of what is proposed in the BRI is implemented, it will markedly change the economic and strategic landscape within which we operate, and India must prepare for that change. Prudence demands that we do so.

Discussing the BRI now is important. Particularly so at present when it is important that we improve communication, dialogue and understanding between India and China which is so important to both countries, the region and the world.