The Truth Behind the “IS” in Afghanistan

The biggest threats to peace in Afghanistan still continue to emanate from the Pakistani deep state, and not from dysfunctional Arab states. 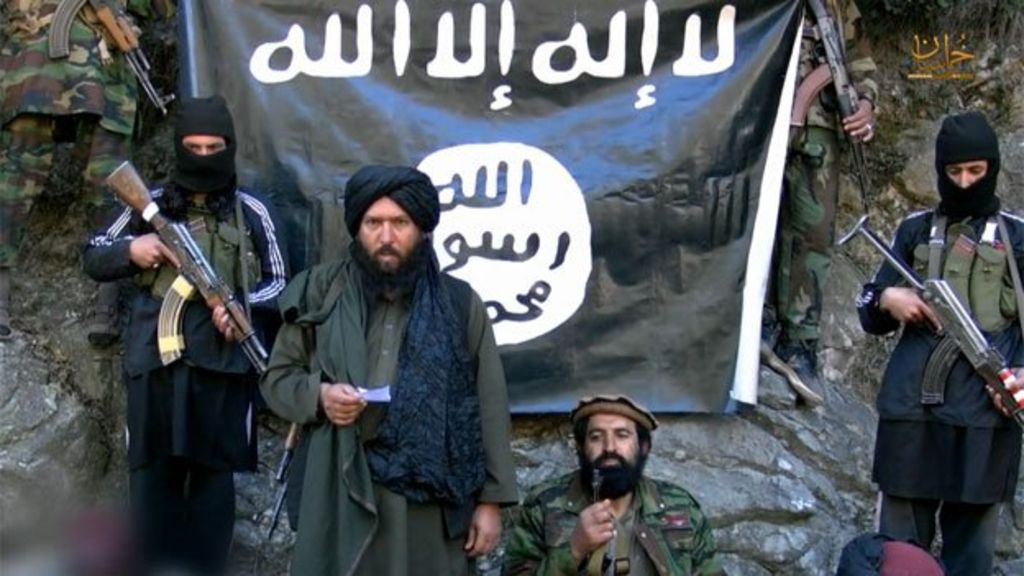 Grab from a ISIS propaganda video showing a leader from the Wilayat Khorasan.

The US Department of Defence’s report to the Congress on 16th December gave credence to the presence of the Islamic State (IS) in Afghanistan. Assessing the current security environment in Afghanistan, the report says that “The Islamic State of Iraq and the Levant – Khorasan Province has progressed from its initial exploratory phase to a point where they are openly fighting the Taliban for the establishment of a safe haven, and are becoming more operationally active.” Subsequently, articles in a few US magazines such as Foreign Policy have already made arguments to the effect that “it’s time to make a deal with the Taliban — the enemy we know” in order to fight the Islamic State.

The first signs of IS evincing interest in South Asia emerged when it issued a map depicting parts of South Asia as a province of the Islamic State. In early 2015, a ‘Wilayat Khorasan’ (the province of Khorasan) was established in Pakistan’s frontier region which then shifted to Afghanistan, partly because of the power vacuum in Nangarhar and Faryab provinces and partly because of the Pakistan Army’s Zarb-e-Azb operation.

At that point (April 2015), NATO did not foresee any significant threat from the IS in Afghanistan. This view changed rapidly after Islamic State claimed responsibility for suicide bombings in Jalalabad that killed 34 and injured 125, leading NATO to concede that an offshoot of IS is “probably operationally emergent in Afghanistan.”

Having come a full circle about the threat from the IS, the Department of Defence report begs the question — is the IS really a threat in Afghanistan? And if so, in what way is it going to alter the ongoing war against the other violent non-state actors in Afghanistan?

Unlike the fears being raised in the Western media, it is highly unlikely that the Islamic State, or more correctly, the Wilayat Khorasan (WK) will launch a frontal attack against the Afghan state. The Taliban still continues to be the principal challenge to Afghanistan. It is numerically stronger than the WK and enjoys Pakistani state support. The WK, with its goal of a Caliphate as opposed to the nationalistic Emirate of Afghanistan—the stated objective of the Taliban—will always be a foreign entity feared for their extreme levels of violence.

Perhaps the most significant level of threat to Afghanistan (and also to Pakistan and India) is that a construct like IS will act as a totem pole for local Afghan terror outfits like the Taliban. The WK will attract elements within the Taliban who are unhappy with the peace process. Terror operates through fear, and the fear that is generated by the WK would attract many groups who are now at the end of their utility cycle.

Apart from owing allegiance to the IS, there is little semblance between WK and its Syrian parent. There are no Arabs in its ranks and it comprises mostly of the Tehreek-e-Taliban Pakistan (TTP). Other elements under the WK banner are the Afghan Taliban at odds with the post-Mullah Omar leadership, and Uzbeks from the Islamic Movement of Uzbekistan(IMU) who were driven out of Pakistani sanctuaries due to Operation Zarb-e-Arb. The motives for each of these sub-groups differ. For the TTP, it is the pursuit of sanctuaries, control over smuggling and money laundering supply chains, and most significantly, on the heroin trade that passes through Jalalabad to Peshawar and thence onwards to Western Europe. For those from the Afghan Taliban, it is opposition to Mullah Mansour and a lack of an alternative, and for the IMU it is also a search for sanctuaries.

These outfits in the region have a long history of shifting allegiances. Lt Gen. Abdul Raziq, the police chief of Kandahar who has kept his province free of the Taliban, in a reply to a question about the presence of the IS in Afghanistan said ‘there are many who claim to be Daesh but what I have seen are some black flags and the same people’.

Even the leadership of WK is predominantly Pakistani. WK’s foes are principally the Pakistani state and its proxy — the Afghan Taliban, which has been described by the WK as an agent of the ISI.  WK has come out against the peace talks between Taliban and the National Unity Government referring to the latter as a “puppet government”. This hardline position against talks is meant to attract elements within the Afghan Taliban who are unhappy with the peace process.

In getting the US to formally take note of the presence of an IS affiliate in Afghanistan and to conduct drone strikes, Pakistan seems to have prevailed in convincing the West of the IS threat in Afghanistan. Principally, the IS now serves as a convenient bogey for Pakistan to remain relevant to the US in counterbalancing India.

Operationally, the  WK in Nangarhar is of concern to Pakistan principally because it checkmates their plans of re-establishing Taliban’s control in southeast Afghanistan. The Pakistani state has been stuggling in its war against the TTP which it claims has the support of the Afghan intelligence. Media reports indicate that the Taliban has constituted a Special Forces unit to take on the IS. No doubt, this unit will have its fair share of Pakistani Advisors, principally the Lashkar-e-Taiba (LeT). However, given the worldwide revulsion with the IS, Pakistan finds it beneficial to portray the Taliban as a lesser evil and hence a part of the solution, rather than the problem.

What this strategy illustrates is that whether it is through Lashkar-e-Taiba in India or through the Taliban in Afghanistan, the biggest threats in South Asia continue to emanate from the Pakistani deep state and not from dysfunctional Arab states. There is a long history of Pakistan volunteering to be the “frontline” state of the West for various causes: communism in the Cold War era, War on Terror in the post-Taliban era and now it plans to use IS for the same effect. Similarly, in focusing on the western world’s fears of the IS, Pakistan’s aim is to legitimise its proxies in the Afghan region and pave the way for mainstreaming the Taliban.

Anand Arni and Pranay Kotasthane work with the Geostrategy Programme at Takshashila Institution, a Bengaluru based think tank.