The Kids are Alright, Worry About the Adults

The Dhaka terrorist attack happened within an overall environment of breakdown of governance and law enforcement. Unless we focus there, we will never start to mend the structure within which such events play out. 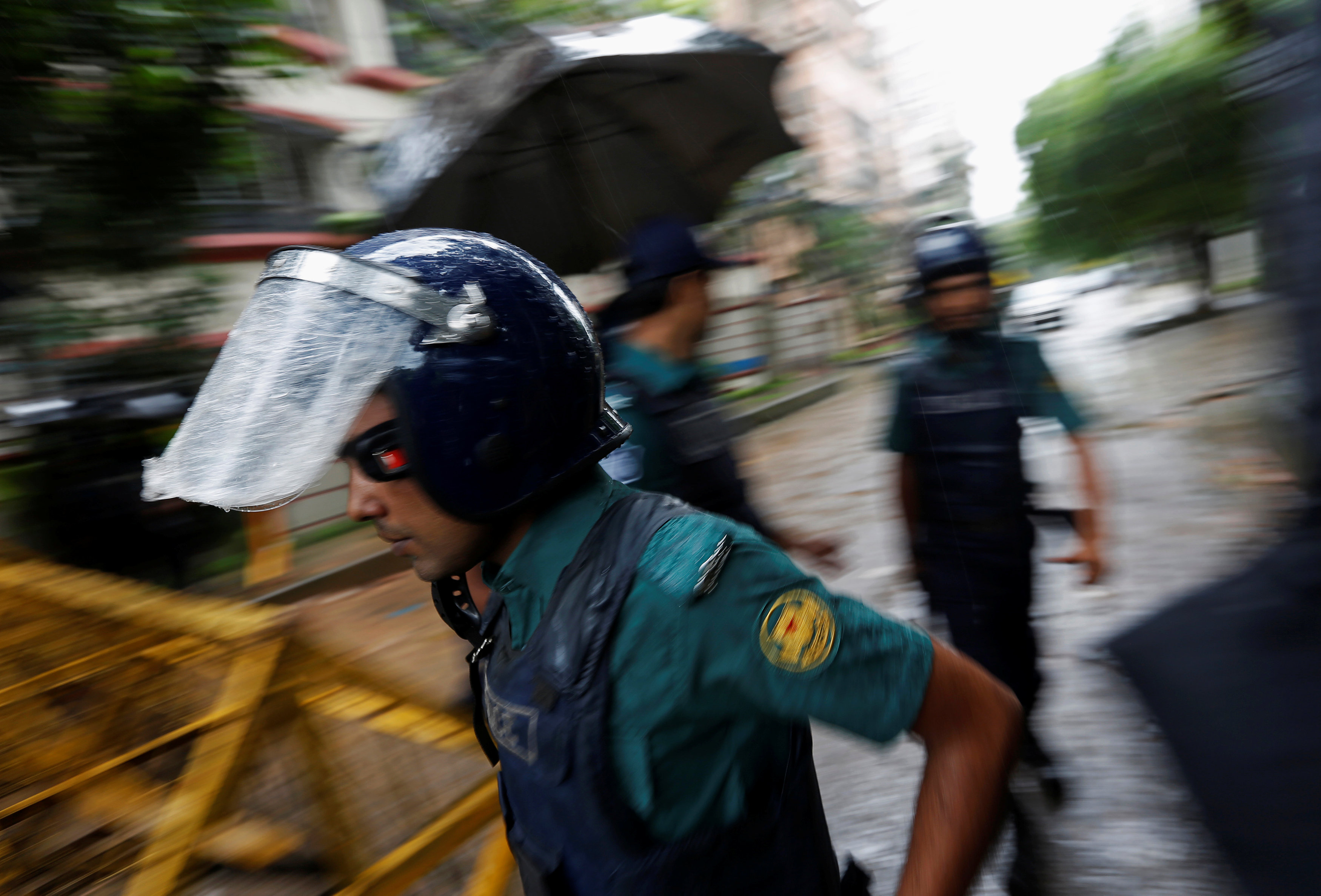 Policemen patrol on the road leading to the Holey Artisan Bakery and the O'Kitchen Restaurant after gunmen attacked, in Dhaka, Bangladesh, July 3, 2016. Credit: REUTERS/Adnan Abidi

The death toll in Rana and Tazreen were far higher than Holey’s hostages. Those earlier events revealed the country’s systemic economic dependency on abusive labour conditions. But Holey has produced an image crisis because the dead were not poor, nameless, peasants-turned-workers.

In the amoral language of the pitiless times we live in, these were “high-value deaths” – for the terrorists who killed them, and for the state and civil society.

What about the gunmen? Three went to English-medium schools, and one was a student at Monash University’s Malaysia branch. The fact that children of the elite trained their guns on a restaurant frequented by the elite and by expatriates has the Bangladeshi media churning with sociological analysis. As a leftist critic has pointed out, when previous terrorist attacks were carried out by madrasa students, they were simply called “militants.” Now that there are three rich children in the mix, the rhetoric is about “problem parents.”

The chaos of the post-attack recrimination shows double standards at work. Of the five alleged gunmen, two came from poor backgrounds. It is of course one of those gunmen whose parents were arrested and brought in for interrogation. The parents of the rich gunmen, one of whom is a member of the ruling Awami League, received sympathetic newspaper interviews (“I don’t know how this happened”).

Even in death and brutalisation, there is no escape from hypocrisy. The poor become faceless statistics, or worse. Saiful Islam Chowkidar, the Holey Bakery chef, was shot dead “by mistake” by the police during the final raid. But in media management by law enforcement afterward, the chef was presented as the “fifth” attacker. Jakir Hossain Shaon, another member of the kitchen staff survived the attack, but police mistook him for the “sixth” attacker. The beating and torture he received at hands of police resulted in his death this week in a hospital ICU, and a cover-up has made the police beating disappear from media. After a security botch-up, and a mismanaged rescue of this scale, law enforcement was under tremendous pressure to produce results. The dead chef, and the tortured-to-death kitchen staff become the “missing terrorist,” a story familiar from American and European cases of the past.

Consider the agencies responsible for the counter-terror operations. At the lead, we have the police force, which has become a centre for corruption, culminating in the recent assassination of a police official’s wife, followed by the mysterious “crossfire” death of the two main suspects. “Crossfire” as a means of killing inconvenient witnesses and suspects entered the Bangladesh lexicon via the dreaded Rapid Action Battalion (RAB), which has been criticizsd by Human Rights Watch as being a government-sanctioned “death squad.” The RAB is a paramilitary unit made up of recruits of the “best” of the police, army, border guards, and other forces. In reality, it operates as a shadowy “I am the law” type operation that has no accountability. Last year, members of the RAB were even indicted as suspects in the case of seven bodies that appeared in the river in mafia-controlled Narayanganj. This same RAB was the second force sent in to end the hostage standoff, after the police had failed.

The RAB’s excesses have been documented in Tasneem Khalil’s new book Jallad: Death Squads and State Terror in South Asia. Khalil was once Bangladesh’s most fearless journalists, but after a 2007 expose in which he documented the role of the Directorate General of Forces Intelligence (DGFI) – the Bangladeshi military’s intelligence outfit – in funding and arming the “underground Islamist” group JMB, Khalil was picked up by the military and tortured. Fleeing into asylum in Sweden, Khalil never felt safe to return to Bangladesh since. It is the Bangladesh military, which terrorised Khalil in 2007, that was the third force sent in to end the Holey siege, after both the police and the RAB had failed.

Above all these forces, the government is the manager of the police, the RAB, army, intelligence (DGFI and National Security Intelligence), and all other forces. The government is run by the Awami League, which came to power in the landslide election victory of 2009 that many welcomed as the return of democracy after two years of military rule (2007-2008). But a prolonged bout of crisis and instability has transformed a once democratic party into an unrecognisable autocratic force. The Awami League’s many troubles, including banking scandals, corruption, and mysterious disappearances, culminated in a controversial national election in 2015, which was boycotted by the main opposition parties amidst allegations of vote-rigging.

The opposition Bangladesh Nationalist Party (BNP) has done its share to deepen the national chaos, and increase polarisation. After the BNP ran a self-defeating campaign of violent arson attacks to enforce national strikes, the government began mass arrests of opposition politicians. By now, the jails are bursting with political prisoners rather than common criminals, and the consequence is a political equation where the government is strong but isolated. In this situation, the government, and the opposition, lack the national consensus necessary to handle a year long pattern of mysterious “Islamist” killings, which culminated in the Holey siege.

Newspapers continue to publish skin-deep articles about the heroes (“one of us”), the villains (“how did this happen”), the lax parenting (“baffled father”), and that last cappuccino sipped at Holey (the “end of innocence”). These stories reveal nothing, and act as a smoke screen that prevents the flow of real information, hard data, tough analysis. Focusing on valiant heroes, nefarious villains, innocent bystanders, and close calls doesn’t tell readers much about the way forward.

Each terrorist attack, in each country, has happened within an overall environment of breakdown of governance, infrastructure, and law enforcement. Those are not glamorous areas of analysis, but unless we turn our eyes towards that area, we will never start to mend the structure within which events play out. The details of police corruption, RAB crossfire, army control, governmental breakdown, hamstrung judiciary, and a defanged opposition don’t necessarily make for compelling reading as profiles of English-medium educated terrorists, perfect cappuccinos, and paradise lost. But it is time to put aside pretty prose and dig deeper into the breakdown of government that has created the vacuum in which violence – freelance and shadowy – can happen again and again.

Imtiaz S. Rahman is a schoolteacher and sports enthusiast.