The discovery is a fresh blow for hopes of eradicating the disease globally, a goal set for the year 2000, but repeatedly pushed back since 1988. 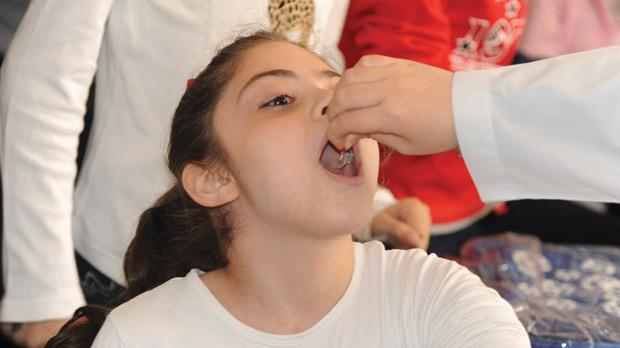 Representative image. In 1979, polio was declared eliminated in the US, meaning there was no longer routine spread. Credit: Sana/Reuters

Geneva: A polio outbreak has been confirmed in an area of Syria partly held by ISIS, the first re-emergence of the virus in Syria since 2014, the Global Polio Eradication Initiative and the World Health Organisation said on Thursday.

The virus was confirmed in stools of two people who had started to become paralysed and those of a healthy child.

The discovery is a fresh blow for hopes of eradicating the disease globally – a goal that was set for the year 2000 when the eradication initiative was launched in 1988, but which has been repeatedly pushed back, with billions of dollars spent on trying to snuff out the last remaining pockets of disease.

Polio invades the nervous system and can cause irreversible paralysis within hours, and spreads rapidly among children. If transmission can be ended, it would be only the second human disease to be eradicated since smallpox was banished in 1980.

The original wild virus still circulates in Afghanistan and Pakistan, but vaccine-derived polio can resurface in warzones and areas with poor health coverage, since the excrement of people who have been vaccinated may infect those who have not.

Nigeria, Laos and Congo have also seen vaccine-derived polio cases in the past three years.

Much of Deir al-Zor is held by ISIS, but the statement from the Global Polio Eradication Initiative did not specify that the polio cases had occurred in an ISIS-held area.

There were two vaccination campaigns in Deir al-Zor in March and April this year but only limited coverage was possible, since access is compromised by security problems, the statement said.

However, detection of the cases did demonstrate that disease surveillance systems were functional in Syria, it added.

On May 29, a World Health Organisation spokeswoman told Reuters that there had been 50 cases of acute flaccid paralysis in the governorate since the start of 2017, but no stool samples had yet tested positive for polio.

“Insecurity continues to severely hamper access in Deir Ez-Zor and other parts of Syria. This not only adversely affects vaccination, but also the transportation of stool samples to polio labs to be tested for polioviruses,” she said.