Amending the charter's pacifist Article 9 would be hugely symbolic for Japan. 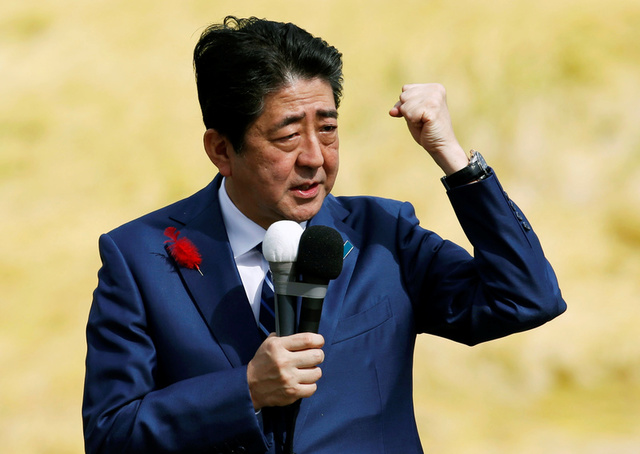 Tokyo: Prime Minister Shinzo Abe, buoyed by a huge election win for lawmakers who favour revising Japan‘s post-war, pacifist constitution, signalled a push towards his long-held goal on Monday but will need to convince a divided public to succeed.

Parties in favour of amending the US-drafted charter won nearly 80% of the seats in Sunday’s lower house election, media counts showed. Four seats remain to be called and final figures are expected later on Monday.

That left the small, new Constitutional Democratic Party of Japan (CDPJ) as the biggest group opposed to Abe’s proposed changes.

Formed by liberal members of the Democratic Party, which imploded before the election and no longer exists in the lower house, the CDPJ won 54 seats, a fraction of the ruling bloc’s two-thirds majority in the 465-member chamber.

Abe said he wanted to get other parties on board, including Tokyo Governor Yuriko Koike’s new conservative Party of Hope, and was not insisting on a target of changing the constitution by 2020 that he floated earlier this year.

“We won a two-thirds majority as the ruling bloc, but it is necessary to strive to form a wide-ranging agreement among the ruling bloc and opposition (to revise the constitution),” Abe told a news conference on Monday.

“And then we aim to win the understanding of the people, so that we can gain a majority in a referendum,” Abe said. He stopped short of claiming to have won a mandate for amending the constitution in Sunday’s election.

Amending the charter’s pacifist Article 9 would be hugely symbolic for Japan. Supporters see it as the foundation of post-war democracy but many conservatives view it as a humiliating imposition after Japan‘s defeat in 1945.

It would also be a victory for Abe, whose conservative agenda of restoring traditional values, stressing obligations to the state over individual rights and loosening constraints on the military, centres on revising the constitution.

“Mr. Abe is trying to create a legacy. His first legacy project was to get the economy out of deflation,” said Jesper Koll, head of equities fund WisdomTree Japan. 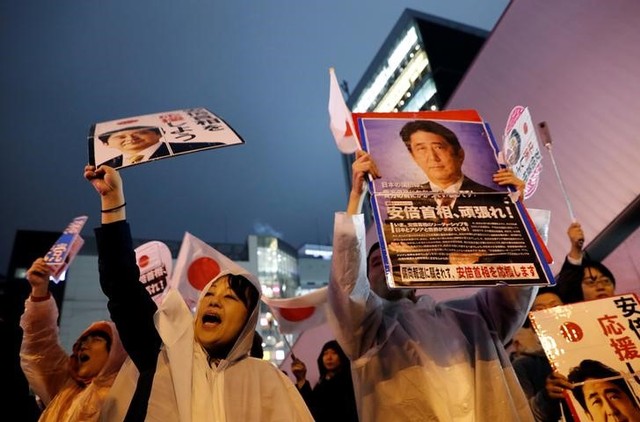 Supporters of the Liberal Democratic Party react to the speech by Japan’s Prime Minister Shinzo Abe, leader of the party, at an election campaign rally in Tokyo, Japan October 21, 2017. Credit: Reuters

Any revision of the constitution requires support from two-thirds of the members of both chambers of parliament and a majority in a public referendum, with no minimum quorum.

“I think that debate in parliament will begin,” said Zentaro Kamei, a senior researcher at think tank PHP Institute and a former lawmaker in Abe’s Liberal Democratic Party (LDP).

“But the reason given for this snap election was Abe’s proposal to change what sales tax hike revenues would be used for. If he starts talking about the constitution, people will say, ‘you didn’t ask me that’,” Kamei said.

Abe proposed last May adding a clause to Article 9 to legitimise Japan‘s Self-Defence Force. Read literally, Article 9 bans a standing military but has been interpreted to allow armed forces exclusively for self defence.

Parliament enacted laws in 2015 allowing Japan to exercise collective self-defence, or aid allies under attack, based on a reinterpretation of the constitution rather than a formal revision.

The LDP’s junior partner, the Komeito, is cautious about revising Article 9, perhaps even more so after signs that some of its dovish supporters had voted for the CDPJ. It also believes that the biggest opposition party should agree with the proposed changes.

Opinion polls show the public is divided on Abe’s proposal. An NHK survey before the election showed 32% in favour, 21% opposed, and 39% unsure.

Media exit polls showed that, despite the LDP’s big win, 51% of voters don’t trust the prime minister, a hangover from suspected cronyism scandals that eroded his support earlier this year and a potential risk if a referendum is held.