The death toll in Sri Lanka's floods rose to 203, with 94 people still missing. 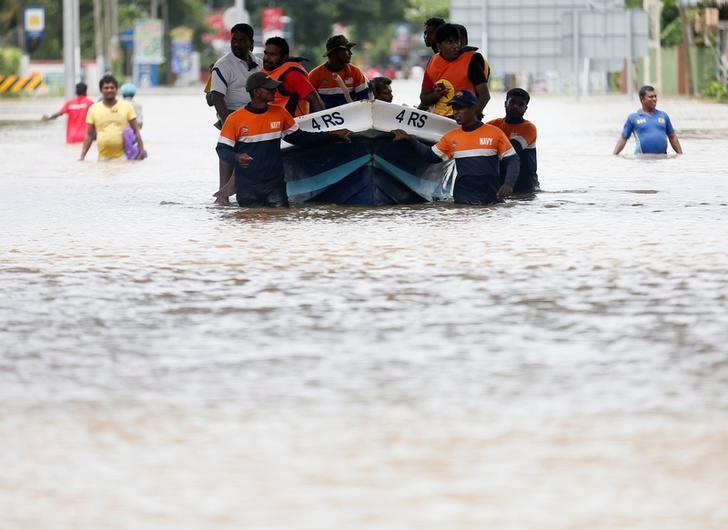 A Sri Lanka navy rescue team use a boat on a flooded road in Kaduwela, Sri Lanka May 20, 2016. Credit: Reuters/Dinuka Liyanawatte

Speaking in the southern town of Galle, Sirisena lamented that flood prevention plans laid had not been implemented in the country.

“People who oppose prevention plans are the ones who cry hoarse when the floods occur,” Sirisena said.

The death toll in Sri Lanka’s floods rose to 203, with 94 people still missing.

The Disaster Management Centre (DMC) said at least 629,742 people of 163,701 families had been affected by the bad weather.

The DMC said 1,505 houses had been fully damaged while 7,617 houses were partially damaged due to the floods and landslides. Around 77, 432 people have been displaced.

The two rivers overflowing was the main reason for severe flooding more particularly in the southern Galle and Kalutara districts.

The Indian contingent of more than 300 navy personnel was assisting in the relief, with divers searching the brackish waters and medical teams seeing patients in makeshift tents set up at shelters.

INS Shardul has nearly 200 personnel on board, including specialised rescue, diving and medical teams, as well as a large amount of relief material and Gemini inflatable boats.

The three PLA Navy ships which were on a goodwill visit, subsequently focused their intentions on relief efforts to help the general public affected by inclement weather.

Japan Disaster Relief (JDR) Expert Team is to leave for Sri Lanka on June 2. “Upon the request of the Government of Sri Lanka, and in light of the friendly relations between Japan and Sri Lanka, Japan decided to provide emergency assistance to Sri Lanka to meet its humanitarian needs,” a statement said.

South Korea has decided to provide humanitarian assistance worth of $300,000 in the form of relief goods such as family tents, blankets and tarpaulins, which will be delivered as soon as possible.

The Maldives said foreign affairs minister Mohamed Asim in his capacity as the special envoy of the president of Maldives met with his Sri Lankan counterpart Ravi Karunanayake to discuss assistance to Sri Lanka.