This is an attempt to keep protests from the powerful Buddhist clergy against proposed constitutional changes at bay. 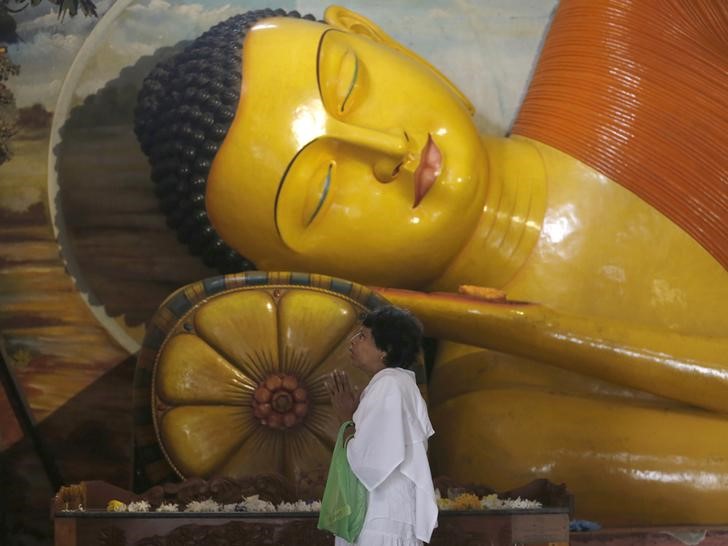 A Buddhist devotee worships in front of a Buddha statue at a temple during Poson Poya day in Colombo June 2, 2015. Credit: Reuters/Dinuka Liyanawatte

Colombo: Sri Lanka’s prime minister said on Wednesday Buddhism will remain paramount in the bitterly divided island, seeking to head off protests led by the powerful Buddhist clergy against proposed changes to the constitution.

But Buddhists who make up 70% of Sri Lanka’s 21 million people are opposed to any changes in the constitution under which Buddhism is accorded foremost position while allowing people of other faiths to practice.

Sri Lanka has chosen only Buddhists to the post of president and prime minister since independence from British colonial rule in 1948. Prime Minister Ranil Wickremesinghe said the Buddhist character of the country would not be touched.

“We are in the process of preparing the new constitution … the president and myself have agreed to maintain the priority given to the Buddhism in the constitution as it is,” Wickremesinghe told a group of Buddhist monks in Colombo.

A Buddhist devotee worships in front of a Buddha statue at a temple during Poson Poya day in Colombo June 2, 2015. Credit: Reuters/Dinuka Liyanawatte

More than 75 prominent monks last week warned the government not to change the constitution or it would face consequences.

The opposition, led by former president Mahinda Rajapaksa, and hardline Buddhist groups have warned the government of nationwide demonstrations if the government went ahead with changes to the charter.

Some opposition members have alleged that the new constitution had been drafted to please Western nations and to dilute the influence of Buddhism.

More than 100,000 people were killed in the civil war that ended in 2009 in a crushing defeat for the Liberation Tigers of Tamil Eelam (LTTE) fighting for a separate homeland for the Tamils.