The loud and intimidating Terminal High Altitude Area Defense (THAAD) System has disrupted the lives and economy of rural South Koreans who just want their peace back. 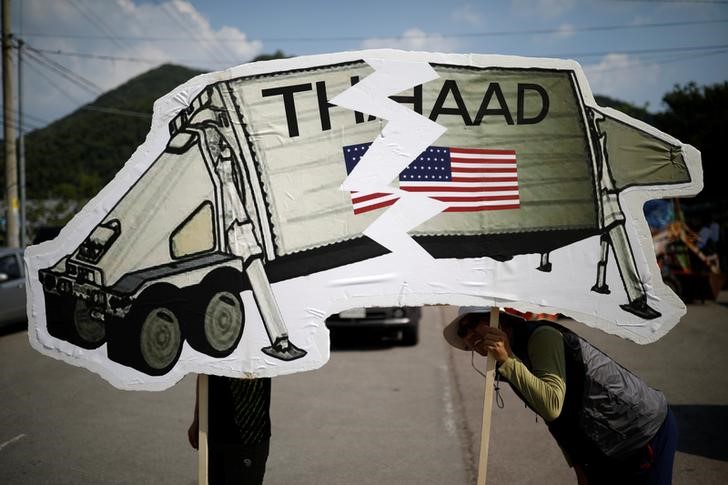 Soseong-ri, South Korea: In Soseong-ri, a small farming village of about 80 residents in southern South Korea, a band of elderly women is at the forefront of protests against the deployment of a US anti-missile system next to their neighbourhood.

A dozen or so women, in their 60s to 80s, stand watch each day around the clock to make sure no military vehicles enter the deployment site through the only road to it – a former golf course owned by a leading conglomerate, the Lotte Group.

The vigil has forced the US military to use helicopters instead to shuttle fuel and supplies to the site hosting the Terminal High Altitude Area Defense (THAAD) system. 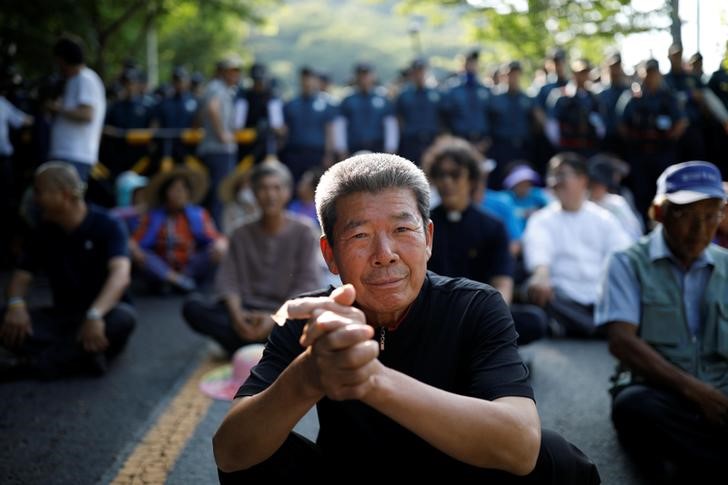 Villagers are blocked by South Korean policemen as they march during an anti-THAAD protest near an entrance of a golf course where a Terminal High Altitude Area Defense (THAAD) system is deployed, in Seongju, South Korea, June 14, 2017. Picture taken on June 14, 2017. Credit: Reuters/Kim Hong-Ji

South Korea’s former conservative government agreed with the US to deploy the battery to counter growing threats from North Korean missiles. New liberal President Moon Jae-in had promised to review the controversial decision during his successful campaign for the May 9 election.

Last week, Moon ordered full deployment be suspended while the government reviews how the system will affect the area’s environment. But there is no intention to change the deployment decision and elements of the battery, including two launchers already installed at the site, will stay, his government said.

The women, who brandish canes and umbrellas at the military helicopters and shout for them to go away every time one flies through the village, say they have no interest in the politics of the deployment.

But they protest, longing for the peace they had before.

“I can’t sleep. I’m taking sedatives at night but I still get only two hours of sleep,” said 87-year-old Na Wi-bun, who lives within a kilometre (0.62 mile) of the site and says she can hear the generator that powers THAAD humming around the clock.

Na goes to the town hall every day, a refuge to a group of women as well as a number of civic groups protesting the deployment.

“During the daytime, we used to farm and later go to the town hall and us grandmothers would spend time together. Now there’s no day and night for us. I live at the town hall now,” said 81-year-old Do Geum-ryeon. Most of the villagers are farmers of chamoe, or Korean melon.

Do, who moved to the village 61 years ago, said she sustained bruises fighting against police in late April, trying to keep US military trailers full of THAAD components from passing through the village at early dawn.

“On my dying breath, I’m going to tell them to take THAAD away,” she said. 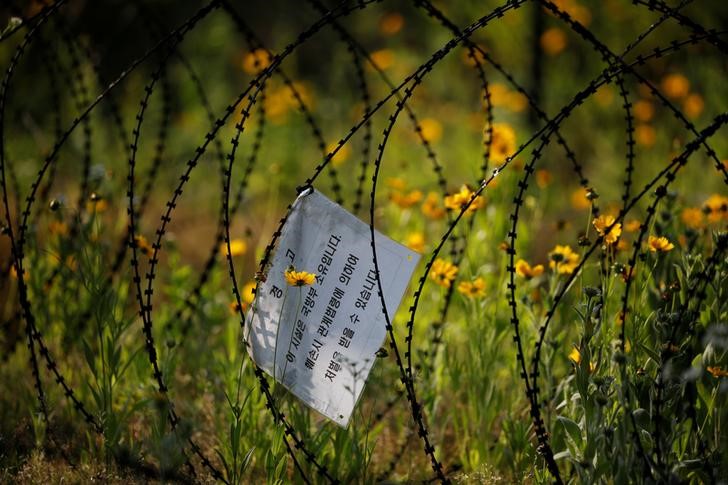 A warning is seen inside a barbed-wire fence installed around an entrance of a golf course where a Terminal High Altitude Area Defense (THAAD) system is deployed, in Seongju, South Korea, June 14, 2017. The warning reads “This facility belong to the Defence Ministry. If you destroy it, you may be punishable by the law”. Picture taken on June 14, 2017. Credit: Reuters/Kim Hong-Ji

On the site now are two launchers and a powerful X-band radar that constitute THAAD. The launchers are visible to the naked eye from a mountain peak roughly two to three kilometres away and the generator can be heard from the mountain.

Visitors who scale the 600 meter (0.37 mile) peak to look at THAAD are shooed away by South Korean police holed up in a guard post near the summit.

Soseong-ri town head, Lee Seok-ju, said he has warned villagers of a long fight ahead.

“I see this going on for at least two years, and at longest, even five. If this was going to end in one or two days, we would have fought tooth and nail, but we’re saving our energy for the long run,” Lee said.

Soseong-ri is part of North Gyeongsang Province, long known for being a conservative stronghold. With THAAD, that has changed.

Most Soseong-ri villagers voted for Moon or the other liberal candidate, Ahn Cheol-soo, Lee said.

That includes 67-year-old Kim Jeom-sook, who farms chamoe with her husband.

“THAAD must go. Sometimes I look up and I am so frightened some of things dangling from the helicopters will fall on us,” Kim said.

Her 73-year-old husband, Lee Mu-hwan, said their business has not been affected by THAAD yet but prices have declined in past years due to oversupply and so they cannot risk another hit. They earn roughly 10 million won ($8,901.55) a year from melon farming, after expenses. 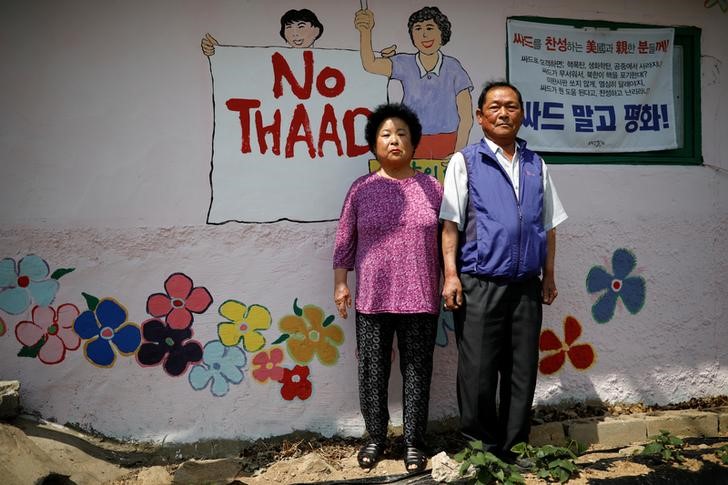 Kim, whose grandfather died in the 1950-1953 Korean War, said THAAD would be of no use if North Korea is determined to strike the South.

“If North Korea wants to boom boom boom, they can hit everywhere and create a sea of fire. I’m sure this area will turn like that too if they want,” said Kim.