Amid Chaos South Korea Intends to Reopen Dialogue With North

President Moon won an election campaign on a more moderate approach to the North and after becoming the president tried initiating dialogue with North. 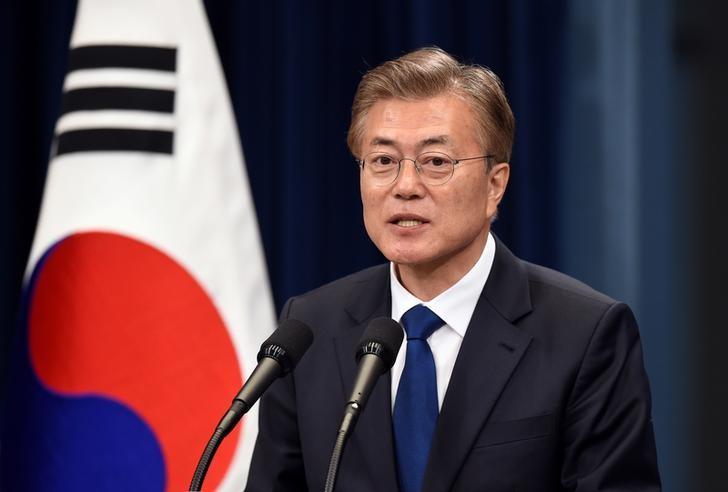 South Korea's new President Moon Jae-In speaks during a press conference at the presidential Blue House in Seoul on May 10, 2017. REUTERS/Jung Yeon-Je/Pool

Seoul : South Korea said on Wednesday (May 17) it wanted to reopen communications with North Korea as new President Moon Jae-in seeks a two-track policy involving sanctions and dialogue with its reclusive neighbour to rein in its nuclear and missile programmes.

North Korea has made no secret of the fact that it is working to develop a nuclear-tipped missile capable of striking the US mainland and has ignored calls to rein in its nuclear and missile programmes, even from China, its lone major ally.

Its latest ballistic missile launch, in defiance of UN security council resolutions, was on Sunday which it said was a test of its capability to carry a “large-size heavy nuclear warhead”, drawing security council condemnation.

“Our most basic stance is that communication lines between South and North Korea should open,” Lee Duk-haeng, a spokesman for the South’s unification ministry, told reporters. “The unification ministry has considered options on this internally but nothing has been decided yet.”

Communications were severed by the North last year, Lee said, in the wake of new sanctions following North Korea’s last nuclear test and Pyongyang’s decision to shut down a joint industrial zone operated inside the North.

North Korea and the rich, democratic South are technically still at war because their 1950-53 conflict ended in a truce, not a peace treaty. The North defends its weapons programmes as necessary to counter US hostility.

President Moon won an election last week campaigning on a more moderate approach to the North and said after taking office that he wants to pursue dialogue as well as pressure to stop the North’s weapons programmes.

President Moon’s envoy to the US, South Korean media mogul Hong Seok-hyun, left for Washington early on Wednesday. Hong said he would discuss North Korea with high-ranking officials in Washington.

Hong said South Korea had not yet received official word from the US on whether Seoul should pay for an anti-missile US radar system that has been deployed outside Seoul.

China has strongly opposed THAAD, saying it can spy into its territory, and South Korean companies have been hit in China by a nationalist backlash over the deployment.

The US said on Tuesday it believed it could persuade China to impose new UN sanctions on North Korea and warned that Washington would also target and “call out” countries supporting Pyongyang.

Speaking to reporters ahead of a closed-door UN security council meeting, US Ambassador to the United Nations Nikki Haley also made clear that Washington would only talk to North Korea once it halted its nuclear programme.

President Trump has called for an immediate halt to North Korea’s missile and nuclear tests and US disarmament ambassador Robert Wood said on Tuesday that China’s leverage was key and Beijing could do more.

President Trump warned this month that a “major, major conflict” with North Korea was possible, and in a show of force, sent the Carl Vinson aircraft carrier strike group to Korean waters to conduct drills with South Korea and Japan.