It would make more sense for Beijing to explore some of the peaceful coexistence options that have been hinted at by Manila. 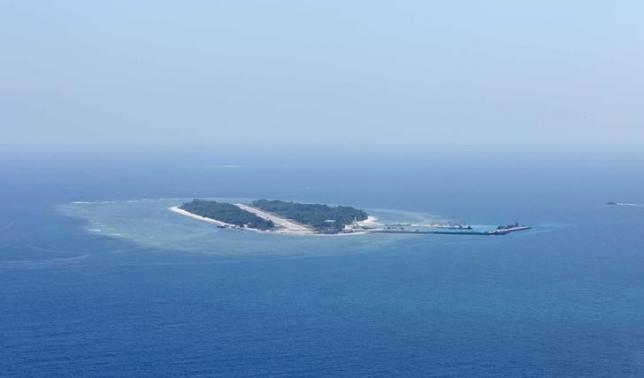 An aerial photo taken though a glass window of a Taiwanese military plane shows the view of Itu Aba, which the Taiwanese call Taiping, at the South China Sea. Credit: Reuters/Ministry of Foreign Affairs/Handout via Reuters/File Photo

The white paper sought to rubbish the claims of Manila, vigorously upholding the Chinese position as “historically” valid. Yet it is evident that this exercise by Beijing is aimed at assuaging the domestic mood, which is incensed over the unambiguous rejection by The Hague’s Permanent Court of Arbitration of China’s muscular assertions and its misplaced certitude about historical claims.

Beijing’s anger is predictable, given the importance accorded to the South China Sea in recent years wherein it had become an extension of the territoriality sentiment associated with Taiwan and Tibet. Chinese President Xi Jinping had invested his personal imprimatur to the sea and related regional maritime matters, and consequently this rejection at The Hague is being perceived as a great ‘loss of face’ for the leader. The non-linear linkage to the ambitious OBOR (One Belt One Road) project, and how this will now be jeopardised, is an even deeper anxiety for the Xi leadership.

For a political culture that tends to insulate the supreme leader from the discord and turbulence at the working level, it is significant that within hours of the arbitration court’s verdict, the Chinese president went on record and asserted, “Our national sovereignty and our maritime rights and interests in the South China Sea will not be affected in any way by the ruling and case brought about by the Philippines”.

Other officials have been even more intemperate. Chinese vice foreign minister Liu Zhenmin described the  ruling as “waste paper”, while the Chinese envoy to the US Cui Tiankai warned that the fallout of the decision “will certainly intensify conflicts and even confrontation”.

This irate response from the Chinese leadership would suggest that Beijing had neither anticipated nor prepared for such an exigency. There was no plan B that would have avoided the kind of anger and petulance that is now on display.

This notwithstanding, most maritime professionals had concluded last year that the historical claim advanced by Beijing apropos the South China Sea was untenable and an adverse decision was expected.

China has not only rejected the July 12 decision but has cautioned its regional interlocutors that it may introduce the Air Defence Identification Zone as it had in 2013. This would heighten the military tension, which is already palpable, and even an accidental or impulsive response by Beijing’s major interlocutors against whom it perceives as inimical (the US or Japan) could have very negative consequences for regional and – by extension – global stability.

The South China Sea award goes beyond the United Nations Convention on the Law of the Sea (UNCLOS), and issues of maritime order and customary practice that respect the principle of freedom of navigation in the high seas. This verdict impinges on the texture and orientation of major power relations in the early 21st century.

An angry or petulant China, which rejects any form of global arbitration that goes against its perceived national interest, is not a desirable outcome and must be avoided. A worst case scenario will be one where Beijing decides to leave the UNCLOS and the global maritime consensus. Comparisons with North Korea, which decided to exit from the Non-Proliferation Treaty and the global nuclear framework, will come to mind.

Concurrently a China that is appeased when it engages in untenable creeping assertiveness or one that seeks to intimidate or coerce its smaller neighbours is an equally undesirable exigency. Respect for international law and equitable principles are the golden mean, and the concert of major and medium powers have a special obligation to exude such rectitude.

China had in the recent past held up a rule-based norm as the desirable path for India to conform to in relation to international nuclear standards. It would be prudent for Beijing to review its response to The Hague award and explore some modus vivendi options that have been hinted at by Manila. It would help calm the roiled waters triggered by the South China Sea nettle if the major powers, including India, help China with a soft landing and not exacerbate the matter further by escalating the intemperate rhetoric emanating from an angry Beijing.

The response from New Delhi has been nuanced and reflects this middle-path wherein it has ‘noted’ The Hague decision even while reiterating the need to strengthen ‘international law’. The foreign ministry statement avers that India “has noted the award of the arbitral tribunal constituted under Annex VII of the 1982 United Nations Convention on the Law of Sea (UNCLOS)” and urged all states to “show utmost respect for UNCLOS”.

It is instructive that New Delhi has ‘noted’ and not quite ‘welcomed’ The Hague’s decision. The choice of word is more neutral and seeks to avoid any further public discomfiture to Beijing – which will be parsing the response of  every nation with a microscope for semantic import. But India has maintained its consistent stance that international law – in this case as derived from the UNCLOS – must be respected.

For the record, it is not India that is reminding China and the international community about the consensual arbitration it has accepted in relation to its maritime delimitation with Bangladesh. The Hague subtext for Beijing is clear. It would be in China’s long-term interest to avoid sabre-rattling and intimidation, and pursue the path of objective restraint and peaceful negotiations.