Many feel that reversing former President Barack Obama’s opening to Cuba could drive the country to become dependant on Russia and China again. 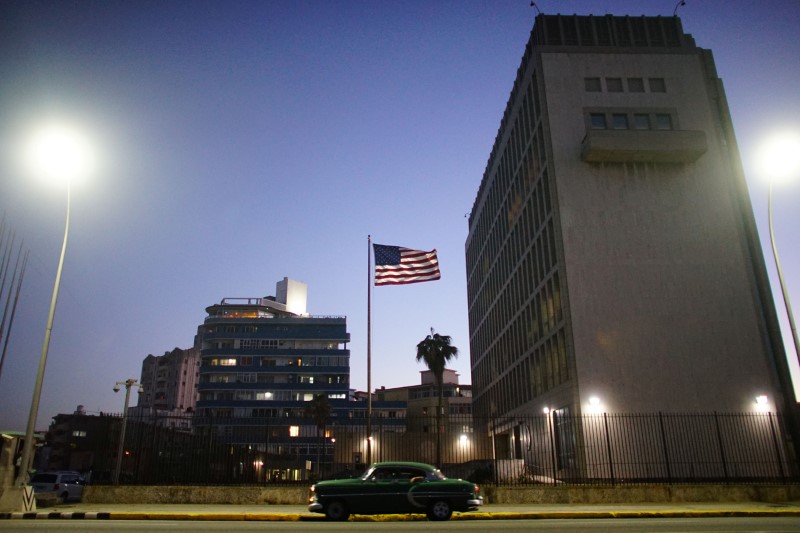 A vintage car passes by in front of the US embassy in Havana, Cuba, January 12, 2017. Credit: Reuters/Alexandre Meneghini/Files

Washington: A group of Republican lawmakers sent a letter to US President Donald Trump on Friday, June 9, urging him not to reverse former US President Barack Obama’s opening to Cuba even as White House aides moved closer to completing a plan that could tighten rules on trade and travel to the island.

With the Cuba policy review approaching its final stages, both sides of the issue have stepped up lobbying to sway Trump’s decision on how far to go in rolling back measures that Obama implemented after a 2015 breakthrough with America’s former Cold War foe.

In the letter, seven of Trump’s fellow Republicans expressed “deep concern” that he is considering rescinding Obama’s policies and said that such a move would “incentivise Cuba to once again become dependent on countries like Russia and China.”

The warning reflected growing unease on Capitol Hill over returning to a more contentious approach to communist-ruled Cuba, even within a Republican party that has traditionally hewed to a harder line against Havana.

Senior officials at the National Security Council were meeting on Friday to craft recommendations that will be sent to the principals committee – Trump’s top foreign policy advisors – and then to the president, people familiar with the matter said.

Though divisions remain within the administration, Trump could make an announcement within weeks, possibly as early as mid- to late June in a speech in Miami, US officials have said, speaking on condition of anonymity.

Among the options under consideration are banning US companies from doing business with Cuban enterprises tied to the military and tightening rules on Americans traveling there, according to people familiar with the discussions.

A White House official, asked about the latest meeting, said the Cuba review is still under way and “not final.”

The US airline and travel industries have made clear they do not want to see reinstatement of Cuba restrictions.

But Trump has come under heavy pressure from Cuban-American lawmakers, including senator Marco Rubio and representative Mario Diaz-Balart, to roll back Obama’s rapprochement.

“My hope is that when the administration is done with their review, they don’t let one or two voices overwhelm what is in the interest of the United States,” representative Tom Emmer, a signatory to the letter, told Reuters.

One of four pro-engagement Republicans who met with White House officials on Thursday, Emmer said they urged the administration not to go too far in rolling back Obama’s measures.

Trump threatened shortly after his election in November to “terminate” Obama’s approach unless Cuba made concessions, something it is unlikely to do.

Obama implemented his normalisation measures through executive actions, and Trump has the power to undo much of it.