'They Shot My Two Daughters in Front of Me': Rohingya Tell Stories of Loss and Forced Migration 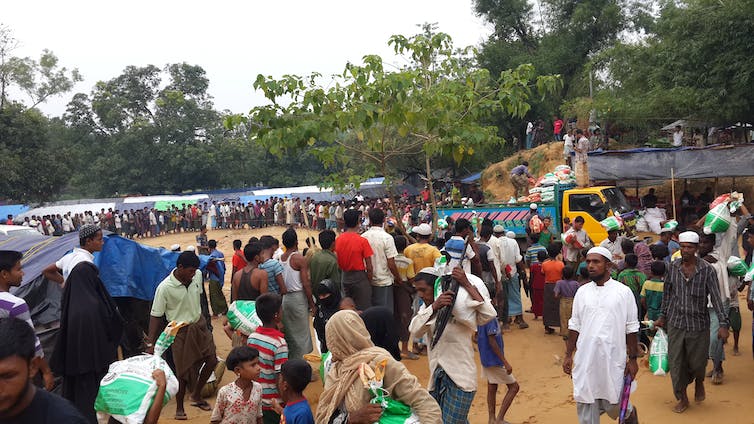 A military crackdown has led to staggering 600,000 people fleeing Myanmar on foot since late August.

If there’s anything positive about the sprawling Rohingya refugee camps near Cox’s Bazaar, Bangladesh, it’s that the residents – despite their appalling recent experiences and obvious deprivation – are at least safe here from Myanmar’s military.

I’ve been visiting Rohingya refugee camps close to the Bangladesh/Myanmar border, and the scale of the forced migration is truly horrifying. Land unoccupied in late August is now a cramped shanty city of bamboo, tarpaulin and mud that seems to go on forever.

Interviews in the camps paint a desperately sad picture. The details of these interviews are invariably confronting and often distressing, and explain why so many Rohingya fled Myanmar so quickly.

A farmer becomes understandably emotional when he tells me:

I have no words to express how it was for me to suffer to look at my daughters being raped and killed in front of me. My two sons were also killed by the government. I was not able to get the dead bodies of my daughters, it is a great sorrow for me.

Background to the refugee crisis

The military’s ongoing “clearance operation” began in late August with the supposed aim of ridding Myanmar of a recently emerged militant group. But this campaign’s real intent is now widely regarded as being to force the ethnic Rohingya, a Muslim minority, from their homes, away from their land, and out of Myanmar.

Myanmar’s military, the Tatmadaw, has used tactics that are brutal, indiscriminate, and yet sadly familiar to the Rohingya and other groups in Myanmar such as the ethnic Kachin and Karen.

Witnesses described to me how, when the Tatmadaw arrived at their village, the soldiers fired weapons and killed people inside wooden homes, arrested young men, raped women, told residents to leave, and then burned homes to prevent the residents’ return.

In some instances, these burnt Muslim villages stand adjacent to fully intact Buddhist communities. Disturbingly, at the camps in Bangladesh, UN doctors have treated dozens of Rohingya women for injuries consistent with violent sexual assaults.

The UN High Commissioner for Human Rights describes Myanmar military’s actions as a “textbook example of ethnic cleansing”. French President Emmanuel Macron has called it “genocide”. He is not the first to make this assertion.

In 2015, the International State Crime Initiative published a detailed research report that concluded the Rohingya were victims of a process of genocide, and predicted the ferocity and intent of the current Tatmadaw campaign.

Stories from the ground

The result of this crackdown has been one of the fastest and largest forced migrations in the region since the second world war. Within just eight weeks, and during the monsoon season, a staggering 600,000 people have fled Myanmar on foot.

These new arrivals are not the only Rohingya here. They are joining hundreds of thousands already forced to live in Bangladeshi camps who are victims of previous intensive Myanmar military persecutions. This highlights the decades-long discrimination against the Rohingya in Myanmar.

I conducted interviews with male residents of unregistered camps and at Kutupalong Camp. One elderly man who has recently arrived in Kutupalong Camp explained that ten men were arrested in his village. Their families, he said, had not heard from them since. He said the military told his village’s residents to leave:

The military led us to prayer and some kind of religious work, and they openly told us to go to Bangladesh – otherwise you will be killed.

A Rohingya man, dressed in a traditional Burmese Longyi skirt, said his village was “friendly” and “quiet”:

We were living there, very friendly. At midnight we heard the sound of bullets, we went outside to see what is happening. I think they behaved like this – arresting, torturing, shooting, hitting – because we are Rohingya and Muslim. We’re not at fault, we are really innocent.

When asked if anyone in his village was hurt, he said:

No one in my family was killed, but some near my home were killed.

A 60 year old man from Buthidaung explained his village was burnt, showing me a large bandaged leg wound he said was from a bullet injury:

Among my four sons, one was killed by the military in front of me, and one arrested, and one of my daughters – my adult daughter – was arrested but I don’t know where she is.

Explaining how he travelled to Bangladesh, a man in his 20s said:

I am grateful to camp residents for their courage in sharing still-raw experiences with me in the hope the international community would hear them and help them.

Myanmar has denied the Rohingya their human rights, so it’s up to the international community to provide the Rohingya with the protections they are entitled to as human beings. They deserve no less.

A Rohingya man in his 20s asked:

I humbly request to you that, we want to be human, live as a human, but Myanmar treats us as animals. We want to go back there as humans.

He should not need to ask.