Sexual Violence is a “Threat to Security and Durable Peace”

Sexual violence is increasingly becoming a tactic of terrorism in conflict areas; approximately one in five refugees or displaced women have experienced some form of sexual violence. 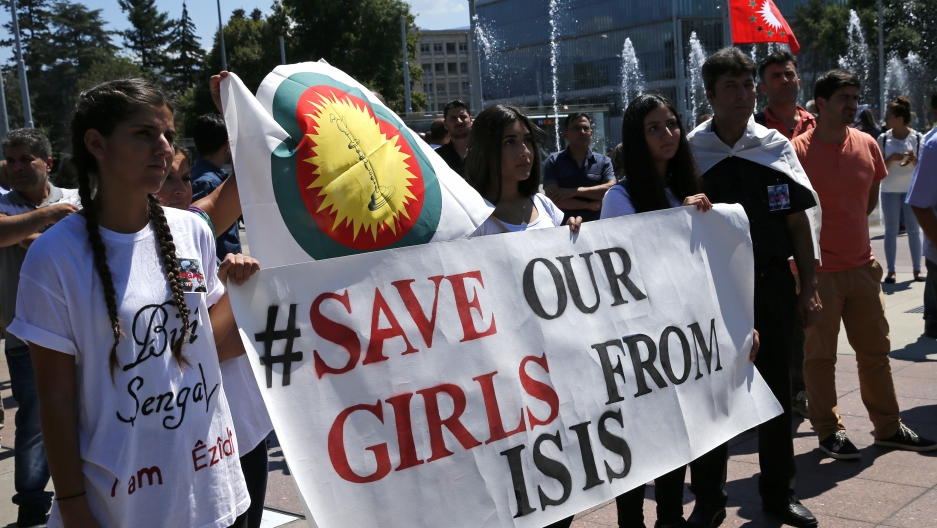 Women hold a banner during a demonstration marking the first anniversary of ISIS' surge on Yazidis of the town of Sinjar, in front of the United Nations European headquarters in Geneva, Switzerland, August 3, 2015. Credit: Denis Balibouse/Reuters/Files

United Nations: Sexual violence is increasingly used as a tactic of terrorism and thus must be addressed as a peace and security issue, officials said at a UN Security Council meeting.

“Too many women live with a spectre of violence in their daily lives, in their households, and families. Armed conflict only serves to exacerbate these prevailing conditions,” said deputy secretary-general Amina Mohammed, adding that such sexual violence is a “heart-wrenching crime.”

The secretary-general shed light on the issue in an annual report detailing numerous cases of sexual violence used for “strategic” purposes in 19 countries.

In Iraq, nearly 2,000 Yazidi women and girls remain enslaved in ISIS territories and reports have emerged of the sale and trade of women as well as the use of women as human shields by IS during operations in Mosul, according to the report.

In Myanmar, over half of the women interviewed by the UN’s Human Rights Office (OHCHR) said they experienced some form of sexual violence which may have been employed systematically “to humiliate and terrorise their community.”

Displaced women and girls are at heightened risk, Mohammed and Jaf said, as approximately one in five refugees or displaced women experience some form of sexual violence.

The UN Mission in South Sudan (UNMISS) documented almost 600 incidents of conflict-related sexual violence in the country in 2016 alone, largely affecting displaced women and girls. The survivors included 57 girls, several of whom were below 10 years of age. Most of the cases occurred at Sudan People’s Liberation Army checkpoints near designated protection sites and reports indicate that sexual violence is being used to punish communities for their ethnic background or perceived support for opposition groups.

Acting special representative of the secretary-general on sexual violence in conflict Adama Dieng reminded attendees that there is a face and name behind every number in the report.

He told the stories of Nasima who, in fear of being killed by her relatives after returning from ISIS captivity, attempted suicide and Marie who contracted HIV because she was too ashamed to report her rape and receive preventive care.

Such shame and stigma are integral components of the use of sexual violence as a tactic of war, the report notes.

“Aggressors understand that this type of crime can turn victims into outcasts, thus unravelling the family and kinship ties that hold communities together,” the report states. For instance, children who are born of rape may face a life of marginalisation and be susceptible to exploitation and recruitment, preventing long-term recovery.

“It is not enough to bring back our girls – we must bring them back with dignity and respect to an environment of support, equality, and opportunity and ensure that they are provided…critical assistance that helps them reintegrate back into their homes and societies,” she stated, referencing the social media campaign #BringBackOurGirls which began after 270 Nigerian girls were kidnapped from their school in Chibok by Boko Haram.

Dieng noted the importance of redirecting the stigma of sexual violence from the victim to the perpetrator which is only possible by involving community leaders to shift harmful perceptions of gender and shame. He also pointed to the need to recognise survivors as legitimate victims of conflict and terrorism who are entitled to relief, reparation, and justice.

“When victims have a chance to tell their stories, to observe the sentencing of offenders, and to benefit from solidarity and support including material and symbolic reparations, it can counteract isolation and self-blame. It tells the community that what happened was not the victims’ fault,” Dieng stated.

Some countries have begun to address sexual violence through legislation including Colombia which established a framework providing sexual violence survivors with access to justice. However, just 2% of the 634 documented cases of conflict-related sexual violence have resulted in convictions, a trend seen around the world.

Mohammed noted the positive developments in perceptions of sexual violence, stating, “Sexual violence in conflict is no longer seen as merely a women’s issue or a lesser evil in a false hierarchy of human rights violations. Instead, it is rightly viewed as a legitimate threat to security and durable peace that requires an operational security and justice response.”

She also acknowledged the UN’s own mishaps in responding to sexual abuse allegations by peacekeeping forces but vowed to tackle the challenge and make zero tolerance “a reality.”

In 2015, cases of sexual abuse by French peacekeeping troops in the Central African Republic sparked global outrage, while a Swedish investigative team found that the UN continues to neglect survivors.

Jaf told IPS that without accountability and justice, including in the case of peacekeepers, the issue of conflict-related sexual violence will not be resolved.

She added that humanitarian responders must be trained to cope with such sensitive issues, recounting the case of a woman who did not report a sexual assault due to her discomfort in speaking to a male translator, and gender equality must continue to be promoted.

“Sexual violence in conflict does not happen in a vacuum. This is the result of systematic failure by the international community to address the root causes of conflict, gender inequality and impunity,” Jaf stated.