In an explosive new report, the French website Mediapart says Dassault Aviation signed its first MoU with the Anil Ambani group on March 26, 2015, two weeks before Prime Minister Modi went public in Paris on his decision to buy 36 Rafale jets and scrap the earlier contract for 126 aircraft. 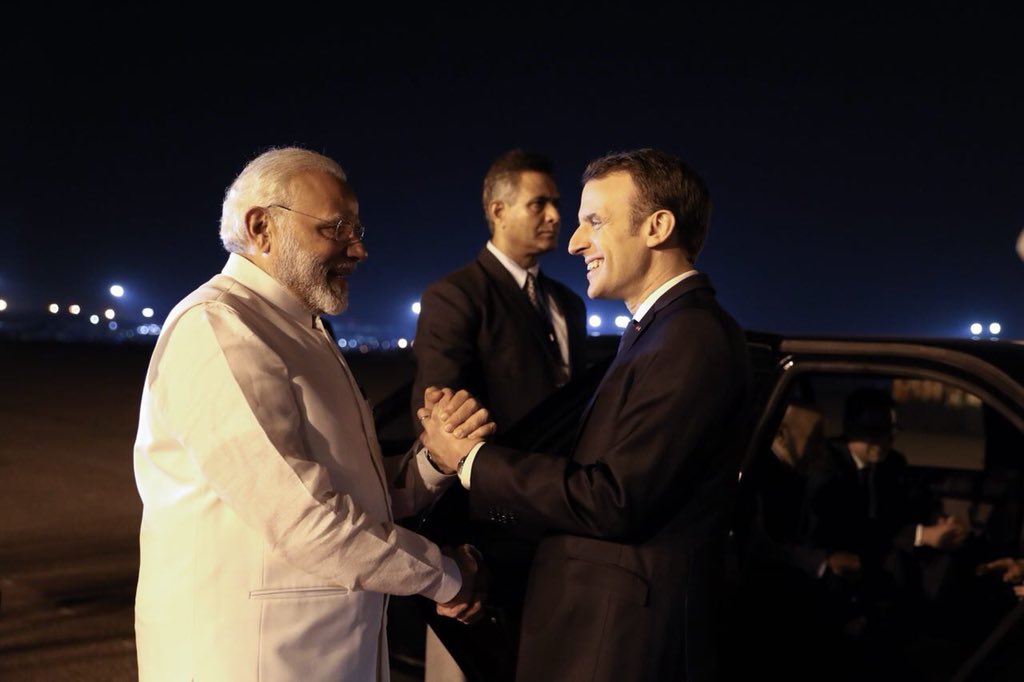 New Delhi: In a development that will reignite demands in India for an independent probe into the controversial Rafale deal, a French judge has been appointed to lead a judicial investigation into alleged corruption and favouritism in the 7.8 billion euro sale to India of 36 fighter aircraft, the French website Mediapart said in a new report on Friday night.

Investigative reporter Yann Philippin of Mediapart (pronounced may-thee-aa-paar) revealed that the “highly sensitive probe” into the 2016 inter-governmental deal  was formally opened on June 14 following a decision by the financial crimes branch of the French public prosecution services, the PNF.

The probe has been launched in the wake of a series of investigative reports published by Mediapart in April 2021 about the deal, including the role of a middleman whose disclosures India’s Enforcement Directorate is reportedly aware of but has not bothered to investigate so far. These reports can be accessed here and here. Following the exposé, the French anti-corruption NGO Sherpa filed a complaint with the tribunal of Paris, citing “corruption”, “influence peddling”, “money laundering”, “favouritism” and undue tax waivers surrounding the deal.

According to Mediapart, the PNF has confirmed that the newly opened investigation will focus on all four of the alleged crimes.

The PNF’s decision to seek a formal probe represents a U-turn from the stand it took in 2019. At that time,  its head, Eliane Houlette, going against the advice of one of her staff and without carrying out any investigations, dismissed an initial complaint filed by Sherpa. The reason she cited to justify her decision was “to preserve the interests of France”.

Now, two years later, writes Phillipin, “her successor as head of the PNF, Jean-François Bohnert, has decided to support the opening of a probe, after the complaint was updated with details from Mediapart’s recent series of investigations.”

Besides other aspects, the criminal investigation will examine questions surrounding the actions of former French president François Hollande, who was in office when the Rafale deal was signed, and the current French president Emmanuel Macron, who was Holllande’s economy and finance minister at the time, as well as the then defence minister,  Jean-Yves Le Drian, now Macron’s minister for foreign affairs.

The investigation will be led by an independent magistrate, an investigating judge.

In a statement to Mediapart, Sherpa’s lawyers William Bourdon (founder of the NGO) and Vincent Brengarth said the launch of the probe “will necessarily favour the emergence of the truth and the identification of those responsible in what increasingly resembles a state scandal”.

While Dassault Aviation has yet to react to the latest developments, the company has consistently denied any wrongdoing and maintained that it “acts in strict compliance with the OECD Anti-Bribery Convention and national laws”.

Mediapart noted that Dassault had said, “Numerous controls are carried out by official organizations, including the French Anti-Corruption Agency. No violations were reported, notably in the frame of the contract with India for the acquisition of 36 Rafales.”

Role of Anil Ambani under the scanner

Given the central role played by Anil Ambani’s Reliance group – Dassault’s Indian partner in the deal for the 36 aircraft – the probe is likely to also examine the nature of the association between the two companies.

India and Dassault had officially been negotiating terms for the purchase and manufacture of 126 Rafale jets right up to Prime Minister Narendra Modi’s publicly announced decision – on April 10, 2015 – to scrap that deal and replace it with the outright purchase of 36 fighters. While Manohar Parrikar, India’s defence minister at the time, was unaware of Modi’s decision until the very end, it now appears Anil Ambani may have had an inkling of it.

In a sensational new revelation, Mediapart reported that the first MoU between Dassault and Anil Ambani’s company was actually signed on March 26, 2015:

“Documents seen by Mediapart show that Dassault and Reliance had in fact signed their first Memorandum of Understanding (MoU) – a document setting out broad outlines of an agreement – on March 26th 2015. That was 15 days before Modi’s announcement of the turnaround, and the exclusion of HAL, and begs the question as to whether the two companies had been informed of it in advance.”

The MoU allowed for a “possible joint venture” between the two companies to include “program and project management”, “research and development”, “design and engineering”, “assembly and manufacture”, “maintenance” et “training”. Though Dassault was still in talks with Hindustan Aeronautics Ltd for execution of the original contract for 126 Rafales, the new MoU was silent about any association or involvement with HAL.

Mediapart has also revealed new details of the partnership contract signed between Dassault Aviation and Anil Ambani’s Reliance, which in 2017 created a joint venture company called Dassault Reliance Aerospace Limited (DRAL), for the building of an industrial plant near Nagpur. 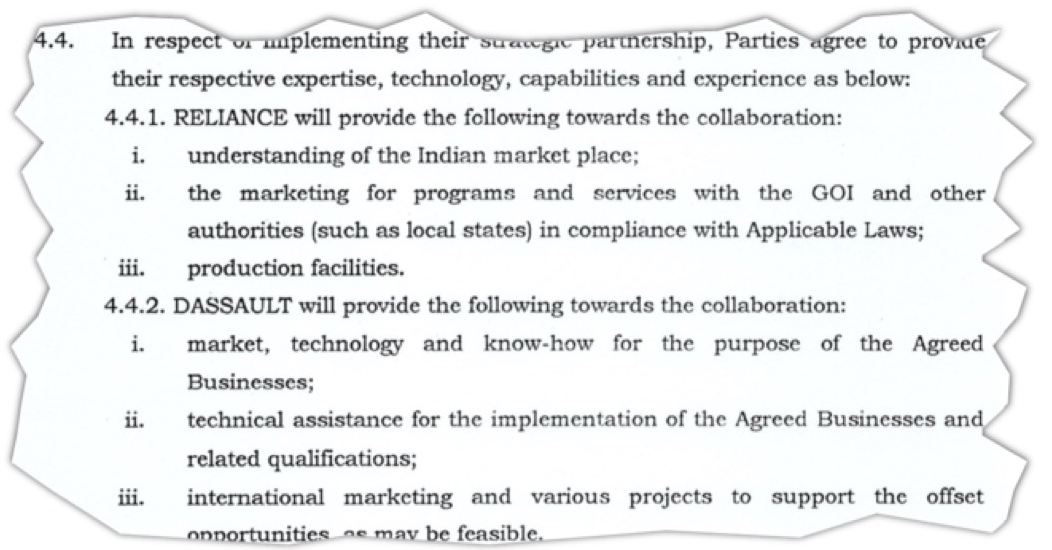 Extract from the November 2015 agreement between Dassault Aviation and Reliance ADAG in November 2015. Photo: Mediapart

The confidential documents obtained by Mediapart reveal how Dassault had in fact no interest in forming a partnership with Reliance other than for political reasons. And its primary expectation from Reliance was “marketing for programs and services with the GOI”.

“It emerges from the documents that Dassault provided Reliance with remarkably generous financial terms for the establishment of their joint venture. Ordinarily, the partners in a jointly owned subsidiary would provide equal funds for its capital. But that was not the case with DRAL.

“The two partners agreed a maximum investment in the subsidiary of 169 million euros. Of that sum, Dassault, which held a 49% stake in DRAL, pledged to provide up to 159 million euros, representing 94% of the total, while Reliance would provide just the remaining 10 million euros.

“This meant that Reliance was given the majority 51% stake in the joint venture in return for a relatively very modest sum.

“While Reliance brought neither funds nor know-how of any significance to the joint venture, it did bring to it its capacity for political influence. In an extract from one of the documents obtained by Mediapart detailing the agreements between Reliance and Dassault, Anil Ambani’s group was handed the mission of “marketing for programs and services with the GOI” – the acronym for “government of India”.

The latest revelations about the terms of the deal between Dassault and Reliance will reignite questions that have swirled around ever since Francois Hollande revealed in a 2018 interview that Reliance’s selection as Dassault’s partner was prompted by the Indian government and that France “had no choice” in the matter.

While the Modi government, Reliance and Dassault have denied Hollande’s version of events, the French government has not formally repudiated what the former president said.

Hollande’s statement itself followed allegations of impropriety given the fact that Reliance Entertainment, a company of the Reliance Group, provided 1.6 million euros of funding in January 2016 for a feature film co-produced by then French president François Hollande’s personal partner, the actress Julie Gayet.

On November 9, 2015, Dassault CEO Trappier and Reliance Group chairman Anil Ambani signed a “strategic partnership agreement”, which was a more detailed document than the previous March 26, 2015 MoU, for the establishment of a joint venture in India.

According to Mediapart, the November 2015 agreement set out a project by the two so that, in the case of “subsequent sales” to India which would include local manufacturing activity, it would be the joint venture company that would be in charge of the “aircraft final assembly line”.

Interestingly, Dassault and Reliance also envisaged taking part in fighter jet development for which HAL was in charge. The two companies planned to provide “design consultancy” for a future version of the  “Light Combat Aircraft” (LCA) manufactured by HAL.

The November 2015 agreement, says Mediapart, “also confirmed that Dassault had hardly any industrial interest in allying itself with Reliance”.

While it detailed how Dassault would provide “technology and know-how”, “technical assistance” and “international marketing” capabilities, Reliance was expected to provide only “production facilities”, presumably land, and “marketing for programs and services with the GOI [Government of India] and other authorities (such as local states) in compliance with applicable laws”.

In sum, says Mediapart’s report, Reliance, “was to use its powers of influence.”

‘Funds gifted to Reliance by Dassault’

The intergovernmental agreement finalising the sale of 36 Rafales was signed on September 2016. Two month later, on November 28, 2016, Dassault and Reliance signed a “shareholders’ agreement” which set out their relationship in the future joint venture company. But, says Mediapart,  the financial details of this were so sensitive that they did not figure in the contract, and instead were contained in a confidential “side letter” which was signed that same day:

“It is that “side letter” that contained the funds gifted to Reliance by Dassault.

“As almost equal partners, the two companies each pledged to provide up to 10 million euros for the capital of the joint venture. Up to that point, everything followed business logic. But Dassault also promised a “share premium”, a supplementary sum on the price of the shares, of a maximum 43 million euros, plus loans detailed as “not exceeding 106 million euros”.

“This meant that Dassault had pledged to provide up to 159 million euros out of the total investment of 169 million euros, representing 94% of that total. Meanwhile, the contribution by Reliance, it was noted, “shall not exceed 10 million euros, all in equity”.”